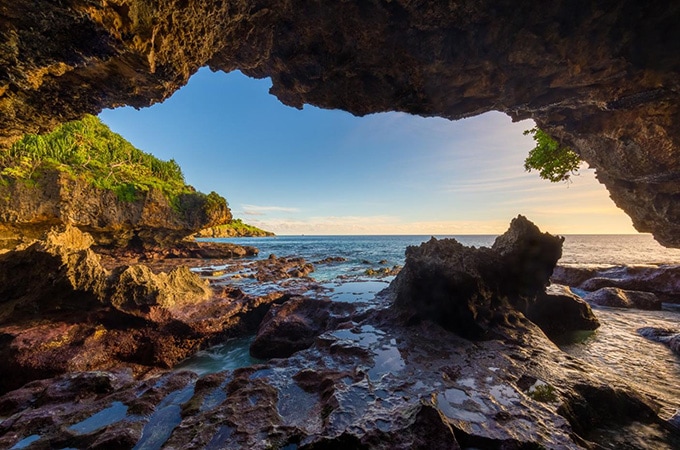 The Australian territory of Christmas Island proves to be an unexpected delight. It isn’t long before I have my first ‘wow’ moment here. Margaret Knoll Lookout is located just a few minutes down a dusty road from the island’s international airport that I’ve just flown into. At the end of that forested four-wheel drive track is an observation platform, beneath which the ground dips away rather unexpectedly. It’s a drop of more than 300 metres through tangled jungle vegetation to the island’s battered eastern shoreline. And there isn’t another person in sight.

Soaring above are imperial pigeons and fruit bats. Both can be seen on neighbouring Indian Ocean islands, but there are other species you won’t find anywhere else. Golden bosuns, an endemic subspecies of white-tailed tropicbirds, glide gracefully above the rainforest canopy. Christmas Island frigates patrol the skies. And there are Abbott’s boobies (the feathered – not political – variety), some of an estimated 300 individuals left in the wild.

But even the birds here are overshadowed when it comes to faunal phenomena, for this is also the only place in the world where you can witness one of the world’s greatest wildlife migrations. Come here around November or December – the exact timing depends on the rains – and the roads will turn red and begin to move before your eyes, as an estimated 40 million Christmas Island red crabs migrate from the forests to the shores to spawn. David Attenborough lists the event as one of his top 10 wildlife experiences, and it’s assumed by many that this period is the only time you’re likely to see these colourful crustaceans. Visit Christmas Island at any time of year, however, and you’ll soon find that’s far from true. You can’t avoid them – they’re everywhere, particularly around the forest edges at dawn or dusk.

It’s true that Christmas Island isn’t your typical couples’ island getaway. Cocktail menus are limited, though booze is dirt-cheap (read: tax-free). Shopping is non-existent. And if you want to book a spa session, you’re best off finding a natural waterfall to shower under. Of those, there are several.

Instead, it’s a place where the pace of life is much slower than on the Australian mainland, and that’s appealing enough. But there are also hidden beaches that can be an effort to get to. Once there though, they’re all yours. At Merrial Beach – accessible down a rocky path in the island’s far west – etiquette dictates that only one group at a time can visit; if you find a car parked at the trailhead already, you either move on or wait for them to return before claiming the sand.

You won’t leave the island raving about the food, and the accommodation options aren’t exactly five-star. In fact, they’re definitely not five-star, though the island’s first eco-lodge is scheduled to open in September next year. But they are comfortable. And honestly, who’d want to waste time hiding out in a hotel when you’ve made the effort to come this far? Not me, I tell you that.  More interesting is to get out and explore the island’s many secrets. And they are secrets, for there are very few who know anything about them. For starters, there’s world-class diving in some of the clearest waters imaginable. If you think the Great Barrier Reef has lost its X-factor, come here. The corals are amazing. And the number of fish – big and small – is mind-blowing.

Not a diver? No problem – you can snorkel over reefs and float above bottomless drop-offs. Or swim among schools of giant trevally in the throes of feeding frenzies. Talk about getting up close and personal.

Trip down to the south coast at sunset and you’ll witness one of the most explosive natural spectacles imaginable. From one horizon to the next, as far as the eye can see, the ocean rollers erupting through countless blowholes sound like cannon fire. I’ve never seen (nor heard) better.

Two-thirds of the island is protected by national park status – great for nature lovers. And to top it all off, there’s a small-island feel that simply can’t be replicated, where the bloke sitting next to you at the pub will invite you to a party or the person you stop to ask directions from ends up driving you there. It’s what makes Christmas Island the merriest speck in the ocean.

Related article: Seduced by the Solmons