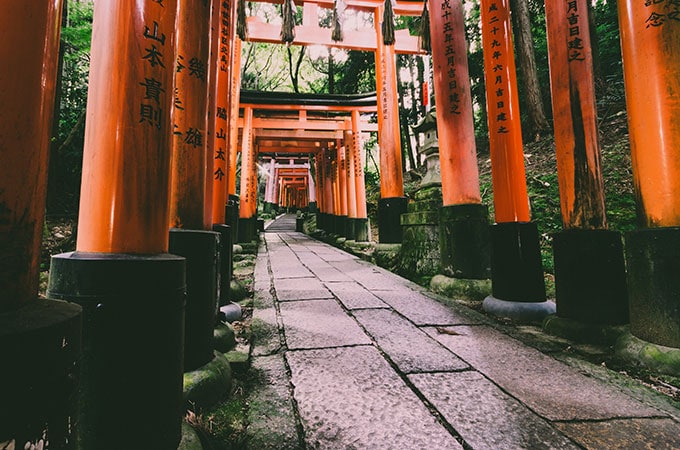 When people tell you that Japan is like nowhere else on the planet, they’re not exaggerating. A place where ancient culture and space-age innovation collides, this unique destination has so many cool things to see. Here are a few to get you started…

Related article: 7 Asian temples you need to see in your life

Okay, you’re probably going to find yourselves in the futuristic capital of Tokyo at some point. For a little ‘bright lights, big city’ action, head to Shinjuku ward. Here you’ll be dazzled by its neon streets, filled with eclectic bars and restaurants. Easily one of its most famous attractions, Robot Restaurant is exactly what you’d expect of Tokyo nightlife – loud, busy, wacky and totally fabulous. It may be referred to as a restaurant, but the real reason for visiting is its cabarets, featuring 10-foot-tall robot warrior princesses, laser beams and dancers performing to blaring pop music. Expect a crazy night.

Also, don’t leave Shinjuku before walking down the beloved Golden Gai. An architectural wonder tucked away in the ward’s centre, this remnant from old Tokyo is home to narrow alleys lined with ramshackle ramen shops and minuscule drinking dens. Good times guaranteed.

You wouldn’t expect to find a large, sprawling park dotted with lush woodlands and groups of grazing deer in Japan’s cities, but that’s what you’ll come across in the nation’s old capital of Nara. One of Japan’s oldest parks, the aptly named Nara Park boasts hundreds (nearly 1,200) of deer that look straight out of Snow White.

Considered to be messengers of the gods, the sweet-faced creatures are a bit of a national treasure and boy are they treasured here. Get up close for a magical experience and get yourselves some deer crackers from one of the vendors around the park.

One of Tokyo’s largest city parks, Yoyogi Park is another picture-perfect spot worth adding to your itinerary. Time your visit for a Sunday if you can and bring some takeaway food for lunch-and-a-show.

Once a week, rockabilly dance crews gather at the park’s Harajuku entrance and show off incredibly impressive moves to foot-tapping rock and roll. Everyone dresses to impress; leather jackets and slicked-back hair is the common outfit of choice for men, while most women go all-out with ’50s-inspired dresses and voluminous petticoats. Do. Not. Miss.

If you’re keen to tick Mt Fuji off your list, head to the Mt Fuji Panoramic Ropeway in Yamanashi. Ascending 400 metres from the eastern shore of Lake Kawaguchiko to an observation deck near Mount Tenjo’s peak, its glass-walled cars offer spectacular views of the world-famous mountain and its surrounds on a clear day. And once you get to the top, there’s the beautiful Mount Tenjo shrine to check out.

Want to escape the crowds? Wear comfortable shoes and hit the Mitsutoge Mountain hiking trail from the observation deck for another amazing Mount Fuji viewing point.

Few places in the world are as visually captivating as the Arashiyama Bamboo Grove in Kyoto. Thick, green bamboo stalks line a pathway here and appear to go on with no end in sight, creating a setting that’s totally enchanting. Walking through it is a simple experience but one you’ll cherish forever.

One of the city’s most photographed sights (and for good reason), this breathtaking spot can fill up quickly. But time your visit for the morning and you’ll be rewarded with a sense of complete tranquility.

Chances are you’ve seen this southern Kyoto shrine on screensavers and all over social media, but don’t be put off by its popularity. Located in southern Kyoto, Fushimi Inar Shrine is a sight you have to see while in the area.

Featuring thousands of bright red gates and a trail leading to a charming wooded forest, the shrine is one of the most important (of several thousand) dedicated to Inari, the Shinto god of rice. Much like the Arashiyama Bamboo Grove, visiting this sacred spot is just about walking and taking in your amazing surroundings. Sounds alright to us.

It’s a popular spot for sight-seers, but Osaka Castle is definitely worth visiting. Situated in Osaka’s centre, the castle and its surrounding parklands tell a fascinating story of Japan’s past – right from the 16th century (when its construction began) through to wartime and the 21st century.

You could easily spend your whole visit here marvelling at the building’s grandeur or wandering through the museum inside, but allow plenty of time for exploring the parklands. Citadels, turrets, giant stone walls and moats add a touch of fairytale romance to the setting, while vast stretches of green lawn make for a brilliant bento-picnic location. Time it right and claim your spot during the popular cherry blossom season in early April for a truly special dining experience.