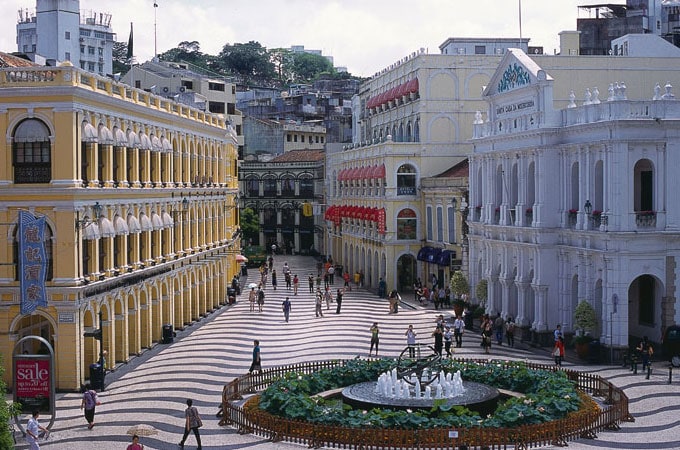 Macau is a compact city made for walking and with over 20 unique historical or religious sites clustered around the city’s heart, it’s easy to navigate your way around, savouring the wonderful sights in a short space of time. Here are eight don’t miss attractions.

1: Of special interest is Senado Square with its wave-patterned, stone mosaic streets and its gorgeous neo-classical, pastel coloured buildings. This is the city’s beating heart which has been a civic centre for centuries and where locals and visitors alike stroll along, stopping to window shop at the many boutiques and stores that are now housed in the lovely old buildings. The restored St Lazarus Quarter, just a few blocks from here, is also a charming place to stroll around and admire gaily coloured buildings, lovely laneways and atmospheric piazzas where you’ll find some really cool little boutiques and galleries showcasing local ceramics, jewellery, handmade soaps and cosmetics.

2: Macau’s most famous landmark, the Ruins of St Paul’s, is sited at the top of a grand staircase not far from St Dominic’s church. Even though it is just the facade of what was originally the Church of Mater Dei built by the Jesuits in the early 17th century and destroyed by fire in 1835, it’s a stunning reminder of Europe’s past influence in China. The intricate carvings of Christian and Chinese characters adorning the facade are clearly visible and quite mesmerising when seen through the magnified lens of a camera.

3: Founded in 1587 by three Spanish Dominican priests, St Dominic’s church, sited at the end of Senado Square, is hard to miss with its magnificent yellow Baroque exterior. Be prepared to spend a pleasurable 20 minutes or so exploring its exquisite interior and treasury museum of around 300 artefacts. It’s free to enter so take advantage of this cool respite to drink in the serene atmosphere of this church which is such an important part of Macau’s history.

4: Keep walking up the hill and you will come to another interesting historical site – Mont Fortress. Built in the 17th century by the Jesuits as the city’s principal defensive structure, the multiple cannons placed around the ramparts on the thick stone walls are  truly magnificent in their old-world military glory. It doesn’t take much imagination to picture what it must have been like all those centuries ago when the Dutch invaded Macau to plunder its vast wealth – and they would have succeeded but for a cannon ball fired from the fort which fortuitously found its way to the Dutch munitions dump, blowing it sky high – the only time the cannons have been fired!

5: Under the fort is the Macau Museum, an engrossing place to spend an hour visually tracing Macau’s history – its traditions, culture and customs. Spread over three storeys, the museum manages to run the timeline of history with intrigue and passion, putting past and modern-day Macau firmly into perspective.

6: Not far away and worth visiting is the lovely and serene Casa Garden, a splendid, elegantly furnished mansion built in 1770 by a wealthy Portuguese and now the headquarters of the Oriental Foundation. Adjacent is the Protestant Cemetery where the inscriptions on the tombstones give an interesting look into the lives and deaths of early 19th-century residents.

7: A-Ma Temple was built in 1488 as a shrine to a girl named A-Ma, who calmed a tempest and saved the crew of the fishing boat she was on from drowning, unlike the rest of the fleet where all hands perished. Worshipped as the Goddess of Seafarers, the local fishermen named the bay where she landed A-Ma-Gao or bay of A-Ma which then became shortened to Macau. Stretching up the hill are six halls built at different times over the centuries, making this site an architectural treasure house of classic Chinese building styles.

8: Located at the base of Guia hill is the lovely, European-style Flora Garden, once the grounds of the Flora Palace but now housing a small zoo and aviary. From here you can take the cable car to Guia Hill, Macau’s highest point offering the city’s best views, to see the whitewashed Guia Fortress, constructed in the early 17th century and Guia lighthouse, the oldest of its kind on the Chinese coast. There’s also a lovely old chapel with recently discovered frescoes adorning its walls, representing both Chinese and European religious motifs.

This is just a small taste of what Macau offers sightseers but honestly, you could spend many days visiting all the wonderful museums and historical sites here so make sure you leave enough time to discover its charms!