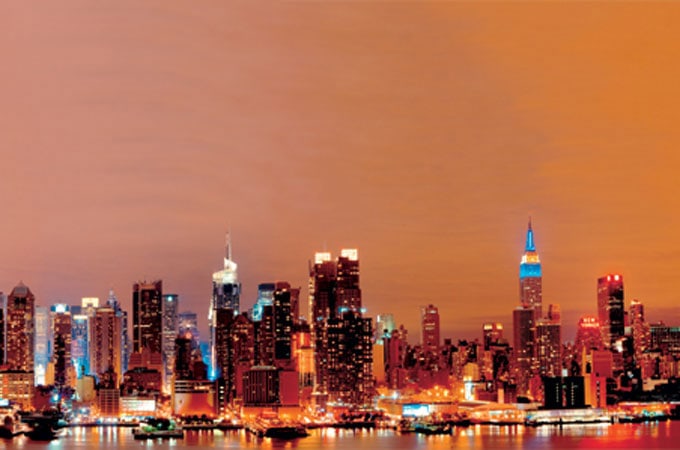 Planning a trip to fabulous New York City? Local foodie Elyse Pasquale gives the lowdown on the ultimate couples experiences the Big Apple has to offer.

» Please tell us a bit about yourself, your upcoming projects and your connection to New York.

I’m a food and travel writer who takes to the skies in search of the world’s best local food. As “Foodie International” I’ve flown more than half a million kilometres in the past three years, eating my way around more than 100 culinary destinations worldwide. When I’m not on the road, I’ve called New York City home for the past 15 years.

Ever since I was a young girl growing up outside of Philadelphia, I always pictured myself as a New Yorker. Even though I’m often on the road, there’s no place like New York – this gorgeous, vibrant concrete jungle I call home. My bedroom window looks out onto the Empire State Building and I take a deliberate moment every night to enjoy the view. I see myself as a culinary anthropologist, connecting with people and different cultures around the world using food as a common language.

I’m currently writing a book, ‘Off the Beaten Plate,’ about the wilder side of my culinary adventures and the people along the journeywho’ve changed my life through food. 2013 will bring more exciting travel to far-flung food destinations worldwide.

» What are your New York culinary hotspots for 2013?

Marrow, Mission Chinese and The NoMad.

» Rooftop bars seem to be all the craze at the moment – is there a particular one which stands out as a must-see for couples visiting New York on a romantic getaway?

The first place that came to mind was the Metropolitan Museum of Art’s rooftop bar, open from May through autumn. You can enjoy cocktails with a sweeping view of Central Park’s treetops, plus there’s always a great installation piece up there. The rooftop pool bar at the Gansevoort Park Ave has great Empire State views.

And for those in the know, Jimmy at the James Hotel is the hottest, swankiest rooftop lounge in town, but a warning: not everyone will get in, not even hotel guests after the celeb-infused witching hour of 9:00 PM.

Taking the trend one step further is Mulberry Project – a hidden basement bar without a drink menu. Fresh ingredients are listed daily and it’s up to you and the bartender to craft your individual liquid experience.

» What are the top three romantic things every couple should do in New York – highlights that are best shared with someone special?

1. Central Park. It’s not just a tourist destination. In the winter, grab a pair of ice skates for a date on Wollman Rink. In the summer, rent a private rowboat at the Lake and follow it up with a cocktail at The Boathouse. To capture the park’s beauty, stroll through the lesser-known Conservatory Garden or get lost in the Ramble.

2. Met Museum Balcony Bar. There’s nothing like drinking Sangria in a museum. From 4PM on Fridays and Saturdays, listen to live classical music in the museum’s Great Hall accompanied by cocktails and small plates.

3. Dress up and take in a classical performance at Lincoln Center. There’s always something going on, from the Metropolitan Opera to the New York City Ballet and the New York Philharmonic Orchestra. Lincoln Center is beautiful by night, worth checking out even if you’re not into the classical arts.

» And the three touristy things everybody should do?

1. The top of the Empire State Building at midnight. The ESB is open daily until 2:00AM, so a midnight tryst on the 102nd floor is a must-do, touristy or not. Reserve express tickets in advance online. Nothing kills the ‘romance’ like standing in an hour-long queue.

2. Get out of Manhattan! Head to the outer boroughs to experience New York’s incredible multicultural neighbourhoods and cuisine. Take a food tour to get your bearings – I recommend hitting Jackson Heights with legendary NY foodie Joe DiStefano, ‘The Guy Who Ate Queens’.

» New York has a reputation for street food – what food trucks do you think are worth tracking down on a visit to New York?

Late April through to October, the Red Hook vendors are not to be missed. Fantastic authentic Latin American cuisine – you have everything from Mexican, El Salvadorian, Guatemalan, you name it. In midtown Manhattan, you can find a great selection of food trucks on weekdays – midtownlunch.com/ restaurant-map. I really like Luke’s Lobster, Mexicue and Korilla Korean Barbecue, to name a few.

» We’re looking for a classic little neighbourhood restaurant, somewhere away from the tourists, down to earth yet fancy enough for a special meal. Happy to travel by cab to a local neighbourhood. Where do you suggest?

April Bloomfield’s gastropub, The Spotted Pig is always amazing. One of NYC’s newer neighborhood joints, Louro, evolved from an underground supper club to a full restaurant with supper club ‘theme’ nights weekly. I love Momofuku Ssam Bar at night, even with Michelin Stars, the atmosphere is casual, no reservations taken, but the food is exciting and upscale.

As for ‘classic’ New York, I’ve had a 15-year love affair with Balthazar. It’s not a ‘little’ neighborhood restaurant, but it screams ‘New York’ in the best, bistro kind of way. Steak frites, towers of fresh seafood and fabulous wines.

» And for the big spenders looking for the ultimate New York dining experience?

You can’t go wrong with the heavy-hitting classics: Per Se, Bouley, Daniel, Eleven Madison Park, Le Bernardin. Choose any one of them and you’ll be guaranteed the meal of a lifetime.

Reservations will probably need to be made months in advance, unless you hit the jackpot with a last minute cancellation.

» What is your favourite New York neighbourhood and why?

The East Village. It’s the first neighbourhood I moved to when I was 22 years old. It was a lot grittier, more punk rock – when east of 1st Ave was still called ‘Alphabet City’ and we’d stay out until dawn at (illegal) after hours bars that no longer exist. Now there’s so much going on – it’s NYC’s ADD neighbourhood.

You’ve got tons of high-end cocktail bars, but they’re still hidden and trying to maintain a little of that East Village grit, there’s experimental cuisine, little hole-in-the-walls where culinary magic is being made for four or five tables, authentic Japanese izakayas and dimly lit sake bars, a million places to brunch and tiny boutiques with cutting edge clothes and second-hand novelties. You can find everything in the East Village that you never knew existed.

It’s always an adventure, from the corner bodega that sells perfect milkshakes to a Japanese street food storefront hawking the city’s best takoyaki.

» If you were going to ‘pop the big question’ in New York, how and where would you do it?

Somewhere monumental, with a terrific view – New York City is all about the view. The middle of the Brooklyn Bridge, top of the Empire State Building, at the Belvedere Castle in Central Park or even on the Wonder Wheel at Coney Island.

Saturday I’d head out to the outer boroughs for great ethnic cuisine. Maybe I’d venture into the basement of the Golden Mall in Flushing, Queens or try Nepali dried beef at Roosevelt Avenue. In the evening, I’d begin with a glass of txakoli and a platter of Basque pintxos at Txikito restaurant in Chelsea, then walk over to ‘Sleep No More,’ my absolute favorite New York theatrical experience. This immersive, interactive theatre loosely follows the sordid story of Macbeth.

The audience wears masks and follows (or in most cases, runs after) actors through a nearly-100 room ‘hotel’ from the 1930s. Afterwards, I’d head to East Village speakeasy/mixology den Pouring Ribbons for a nightcap.

My Sunday morning tradition is an ‘Everything’ bagel with lox, cream cheese, capers and onions from Ess-A-Bagel on 20th Street and 1st Avenue (the original location!) and the New York Times Sunday crossword puzzle. Afterwards, I’d take a leisurely bike ride along Hudson River Greenway, from Battery Park to the George Washington Bridge.

After the exercise, I wander through Eataly, the only place in New York that makes me feel like I’m back in Rome. I’d get inspired by the pastas, olive oils, cheeses and the fish counter. Then I’d end up on Eataly’s roof deck Birreria for a plate of prosciutto and a few microbrews.