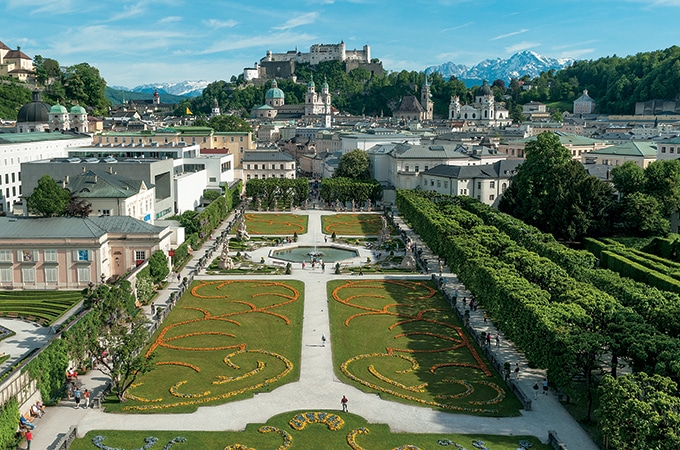 Let’s start at the very beginning. More people visit Salzburg because of The Sound of Music than for Mozart. But whatever your reason for going, there’s no doubt that the city itself is the real star.

From the very first screening of The Sound of Music, it was a phenomenon. As Nicholas Hammond, who played Friedrich in the movie, said to his on-screen brothers and sisters during the interval in its very first showing on 2 March 1965 in NewYork, “Our lives will never be the same from now on.” He was right.

This on-screen love story stemmed from the book that star ted this global phenomenon – The Story of the Trapp Family Singers written by Maria Augusta Trapp in 1949. Maria was a nun. She was at Nonnberg Abbey before going to work with the Captain. She did teach the children to sing and she did marry the Captain. So when you wander around Salzburg, you’ll be stepping in the footsteps of the real Von Trapps, as well as the actors that brought the story to life.

Mirabell Gardens is where Maria and the children sang and danced in “Do Re Mi”, strutting around the pond and jumping up the stairs. The Gardens are absolutely spectacular and well worth a couple of hours. From here you can see the Hohensalzburg fortress, which was built in 1077 and, thankfully, has a funicular for better access. It’s one of the best castles you’ll ever visit – make sure you call in to the marionette museum on site, which has some of the puppets that appeared in “The Lonely Goatherd” scene. Nearby, you can walk past the gates of Nonnberg, where the real Maria was a postulant. Go for an early morning stroll and you might even hear the nuns singing.

You can also see the striking Salzburg der Moderne from the castle, the modern art museum sitting pretty on the edge of the Mönchsberg. The narrow, cobbled streets of the UNESCO World Heritage-listed Old Town are home to many treasures, including Mozart’s birthplace in the gorgeous, stylish Getreidegasse; historic Salzburg Cathedral; Residenz Square (where Julie Andrews hurried through, belting out “I Have Confidence In Me”); and the lovely Kapitel Square, with its modern art installation Sphaera – a statue of a man on a golden globe and a chess set for people to play. Not far away you can also do one of Salzburg’s most romantic rides, in a fiaker (horse-drawn carriage). A visit to St Peter’s Cemetery, cut into the sheer rock face of the Mönschberg, is fascinating – make sure you go up into the catacombs.

The rock of the Mönschberg also houses the Felsenreitschule (Summer Riding School), which hosts the choral festival of the famous Salzburg Festival; the real Von Trapps did win this festival, as portrayed in the movie. The 50th Anniversary Gala celebration was held here last October, with several cast members and some of the real Von Trapps present to see some of the stars of the local production, performing. Let’s just say that when everyone – cast, honoured guests, and the audience joined together to sing “Edelweiss”, there wasn’t a dry eye in the house – mine included.

To see some of the other notable places used during the movie, it’s advisable to do the Original Sound of Music Tour withPanorama Tours. The four-hour tour includes some of the places mentioned earlier, but also heads out of town to Leopoldskron Palace and Frohnburg Palace (which were both used as the family home in the movie), and swings past the Von Trapp Villa, where the family actually lived. Another stop is Hellbrunn Palace, where you’ll find that famous gazebo (of “Sixteen going on Seventeen” fame), but it’s worth another visit to enjoy the beautiful and cheeky trick fountains put in place by a mischievous Prince Archbishop Markus Sittikus in 1613-19. From here the tour goes to the Lake District to Mondsee and its beautiful St. Michael’s Basilica. The movie’s wedding scene was shot here, and if the tree-lined road coming into town looks familiar, it too was in the movie. Do go into the church’s gift shop – it was here I purchased the book that started the Sound of Music phenomenon – The Story of the Trapp Family Singers written by Maria Augusta Trapp in 1949. You can also pick up postcards showing the cast filming the wedding.

The village of Werfen is now home to the brand new Sound of Music Trail, around the idyllic pasture where Maria started teaching the kids “Do Re Mi”. After you’ve skipped and twirled in the lush, green grass, stroll down the hill to town and indulge in lunch or dinner at the Michelin-starred Obauer Restaurant. The gastronomic delights are a surprise, being tucked away in this tiny village, with the presentation of the dishes out of this world – along with the taste.

Another must-have Salzburg experience is to tuck into a piece of the Original Sacher-Torte in the famous Café Sacher, which is in the historic and very grand Hotel Sacher – where Julie Andrews stayed when the movie was filmed. You can see her photo on the wall by the entrance to the café. In the afternoons, sit on the terrace of the Hotel Sacher’s bar and look across the river to the Old Town, with the spires of the churches glinting under the fading orange glow, and the lights of the fortress blinking, signalling to the world that all is well in beautiful Salzburg.

Serious Sound of Music fans can stay in the original family home, Villa Trapp. It’s located about 10 minutes from the city centre, near a train line that was actually the family’s means of escape from the Nazis (not by climbing ev’ry mountain). The villa is absolutely gorgeous, beautifully furnished and brimming with history, stories and photos that will delight all SofM aficionados. Its darker past will also fascinate: after the family escaped, the villa was taken over and used as headquarters for the infamous Heinrich Himmler, Reichsführer of the SS stormtroopers and architect of the dreadful “Final Solution”.

Qantas code-shares with Emirates to Dubai, with onward flights to Vienna. From Vienna, travel to Salzburg via train for a fast, clean and seriously scenic trip.

If visiting this beautiful part of the world, you have to go to Stiegl Brewery, which dates back to 1492.

To find out more about Salzburg, visit the website here. Inspired to visit Austria? See other amazing Austrian destinations here.