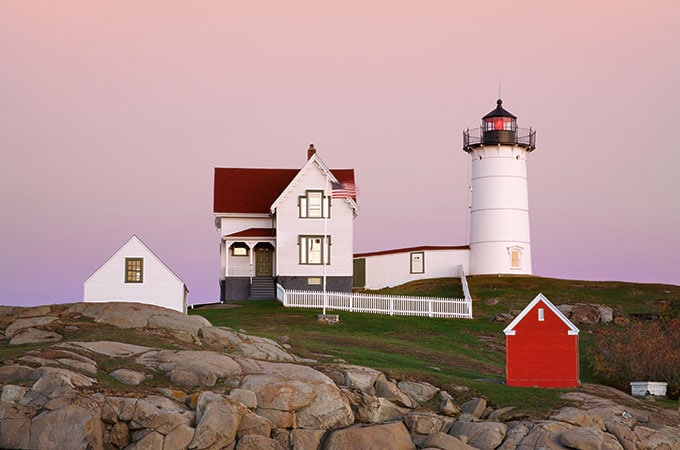 Quaint is not a dirty word. At least not in Maine: America’s northernmost, easternmost state seems determined to project its white picket fences, bunting and lighthouses as far into the Atlantic as possible.

Officially, Maine is known as ‘The Pine Tree State’. Evergreens dominate the landscape, lining the sides of highways, climbing up hills and running down to the water. But driving in from the south you immediately notice that their license plate slogan, ‘Vacationland’ is just as appropriate.

It’s the ocean that draws the crowds. The state is defined by its coastline – 400 kilometres of it, stretching all the way to the Canadian border. The sandy southern beaches are popular with well-heeled weekend visitors from nearby Boston, while the wild and woolly north attracts more outdoorsy types. They all come up US Highway 1 (or the much less scenic Interstate 95), the road that follows the eastern seaboard all the way up from the Florida Keys.

As we drive into the state, the ‘Welcome to Maine: The Way Life Should Be’ sign on the New Hampshire border is almost superfluous – you know you’re in the state from the abundance of lobster shacks and strawberry stands.

Heading up the coast, our first stop is Ogunquit. Prepare for some good-hearted ribbing from locals as you try to say the word, which means ‘beautiful place by the sea’ in the language of the area’s indigenous inhabitants (those Abenaki Indians sure had a way with naming places).

Pronunciation difficulties aside, Ogunquit lives up to its billing. The highway crawls through the town centre, which sits on a gentle slope above sandy beaches and the Ogunquit River. Like the highway, it’s clear the pace of life here is just a bit… slower than in the states to the south.

Though the town has its fair share of surf nearby, the beach culture isn’t at all in your face (which might have something to do with the not-so-balmy temperature of the Atlantic Ocean). We opt for Ogunquit beach, a short walk from town. Looking down, it’s hard to believe you’re in North America. The sand is so white and squeaky that, with the sun on your face, you could be forgiven for thinking you were in Tahiti.

The sun, though hot, doesn’t quite pack the punch that it does in the southern hemisphere and we manage to spend almost a whole day sunbaking – a minor miracle for someone as pasty as I am. A not-so-hard-earned thirst leads us to Cornerstone on Main Street, where we enjoy a dizzying (quite literally, after a day in the sun) array of craft beers.

Before leaving Ogunquit, we head down to Perkins Cove for a short sightseeing boat ride aboard the Finest Kind III. As we drift underneath the hand operated drawbridge at the mouth of the Ogunquit river, it quickly becomes clear how seriously Maine takes its first ‘big L’ – lighthouses. We get our first glimpse of one just south of Ogunquit, Cape Neddick Light. Red roofed and sitting on a patch of grass on a rocky tidal island, The Nubble, as it’s known to locals, is picture perfect. So perfect, according to our first mate, that its picture is carried aboard the Voyager spacecraft for the purposes of delighting any marine-architecture enthusiast aliens it might encounter.

We see hundreds of buoys dotting the surface of the ocean on the boat ride, but the importance of Maine’s second ‘big L’, lobster, only becomes clear once we leave Ogunquit and head north. It would only be a slight exaggeration to say that every second business along the highway is a lobster shack (or pound, in the local vernacular).

It’s only a 25-minute drive from Ogunquit to Kennebunkport, but the highway meanders through the forests and marshes of the Rachel Carson National Wildlife Refuge. As we check in at 1802 House we get our first taste of Maine-style B&B hospitality from Terry, the effervescent innkeeper, who sends us to The Clam Shack to satisfy our lobster craving.

The Clam Shack, it turns out, is a Kennebunkport icon. Opened in 1938 as a fish market, it was bought in 2000 by Steve Kingston, who worked a lemonade stand there as a kid.Today it has a reputation for having the best lobster roll in the country. And man, you can see why. There’s almost a whole lobster worth of flesh on the homemade bun that Steve brings out, mixed in with both mayonnaise and drawn butter. It’s exquisite enough to spoil you for life – no lobster roll will ever compare. “We like to think that the lobsters aspire to be in one of our sandwiches,” laughs Steve proudly.

As we talk to the humble lobster roll impresario, decked out in his finest gumboots and apron, an enormous black four wheel drive with dark tinted windows pulls up. A woman gets out, along with a minder in a dark suit. Steve must register my look of surprise, because he explains that George Bush, Snr. spends every summer in Kennebunkport, along with his huge extended family. Apparently the former president is partial to a lobster roll. So much so, in fact, that he overruled the secret service, who wanted to stop lobstermen from collecting traps close to the family estate on Walker Point just south of town.

One day in Kennebunkport doesn’t seem like quite enough, though, so we opt to stay an extra night at the authoritatively named Captain Lord Mansion. Like 1802 House, it’s a traditional inn – which means big rooms, huge beds and an even bigger breakfast. New Englanders take the first meal of the day very seriously, to the point of having multiple courses. Fresh local berries are followed by pancakes, sausages and even steak. Just the kind of foundation you need for a long drive up the coast.

Driving north from Kennebunkport, you quickly find yourself in the Portland suburbs. Maine’s biggest city has stunning water views, yet more lighthouses and the internationally recognised Portland Art Museum. But ‘The Forest City’s’ true allure is something much harder to find in the United States: good coffee. With coffee shops like Yordprom and Bard offering quality espresso, you may as well indulge your addiction – it can be a long time between quality cups in the land of the filter.

Drive out of Portland and you’re driving into the wilderness. Urban sprawl quickly becomes farmland, which in turn gives way to forest. Deer drink from the edges of vast marshes as the highway slides north, occasionally slowing for picturesque towns with old world names. Huge bridges span rivers and inlets as the coastline becomes increasingly craggy.

Though we’ve only driven a bit over an hour from Portland, Boothbay Harbor (pronounced Boothbay Hah-Bah by New Englanders) seems like an outpost of civilisation. Despite thriving yachting and whale watching industries, there’s something appealingly dilapidated about the fishing village. Our corner room at the Fisherman’s Wharf Inn has the best view in town – it’s the ideal spot to observe tall ships slipping into port against the backdrop of pine trees and salt-eaten paint.

The next morning we head to the Coastal Maine Botanic Gardens just north of town. Situated on the Back River, you could easily spend hours in the Gardens’ mixture of woods and manicured landscapes. As we sit admiring the pine trees reflected in the river water we get talking to an elderly local couple. The husband, a Korean War veteran, recommends we go further north, to Acadia National park: “Go to Cadillac Mountain, it’s not the easternmost part of the country, but it’s where the sun first rises on the United States.”

So head north we do, through the now familiar forests and swamps. A quick stop for lunch in Belfast, a historic red brick shipbuilding town, yields a surprising number of options. Wherever you eat, make sure you stop in at Dave’s Old Fashioned Soda Fountain, as true a piece of Americana as you’ll find, afterwards for a sundae or milkshake.

Acadia National Park, named after the French north American colony which once included Maine, is our final stop. We stay in Bar Harbor, on the Park’s eastern flank; it’s the main hub for sightseers, hikers, bicyclers and kayakers. The town is home to dozens of hotels, but retains a laid back, almost hippy-ish vibe and a bunch of good eating and drinking options, including several brew-pubs.

Considering how busy Bar Harbor is, it’s amazing how quickly you can find yourself alone with nature once you step into Acadia. Even driving the Park’s spectacularly scenic loop road makes it easy to completely forget about civilisation.

Unfortunately, and despite our best efforts, we didn’t manage to spot a moose on any of our hikes; seals, seabirds, chipmunks and lots of deer where some consolation, though. But being the first people to see the sun rise on the USA from the mossy granite top of Mount Cadillac? That was something else.