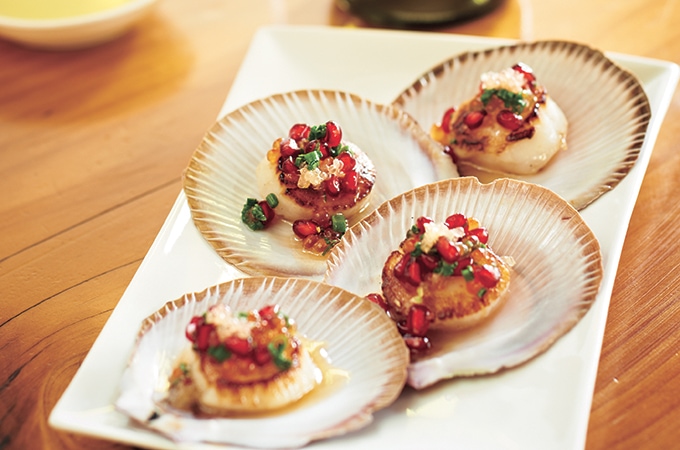 A captivating combination of Australia‘s most celebrated food and wine, stretches of gloriously green pastures, private pristine beaches and quaint village communities filled to the brim with vibrant local produce, Western Australia‘s Geographe Bay is a romantic escape every couple should have the pleasure, and absolute privilege, of experiencing.

Home to a number of small towns, Geographe Bay’s core offerings are characterised by the stunning natural location. The clean air, fertile farmland and untouched expanse of coastline have produced ideal wine-making conditions, the region’s star attraction Margaret River accumulating a dizzyingly large selection of winery estates which have in turn produced some of Australia’s most internationally applauded drops.

Begin your escapades on a relaxed note at Margaret River’s Clairault Winery, where you can taste a selection of the outstanding Streicker range as well as the glorious estate wines – one of my rosé-loving travel companions noted that the Clairault interpretation was one of the best she’s tasted.

The estate offers guests simple deli cafe lunches which can be enjoyed on the deck cocooned by native bushland, a welcome break for many from the foodie extravagance of nearby vineyard restaurants. The cafe also stocks a selection of locally-produced sauces, conserves and other yummy treats to take home. Enjoy some quiet time over a heady shiraz by the stone fireplace, or retreat to the expanse of perfectly manicured green lawn with a light pinot for a wonderfully intimate wine experience.

However, if foodie extravagance is what you’re after, nearby Leeuwin Estate will not disappoint. A leader in the Margaret River winery clan, (their Art Series Chardonnay has been named by some critics as “the greatest white wine Australia has ever produced”) this vineyard is a must-visit for the serious food and wine aficionado – don’t let the modest exterior fool you. The tastings are some of the best I’ve experienced, involving five of the winery’s most popular drops teamed with complementary appetisers.

These little bites featured delectable seasonal sensations such as fresh oysters, fennel and heirloom tomato salad and confit duck teamed with stewed cherry, which left my taste buds singing. Leeuwin Estate lunches are held in the adjoining restaurant which overlooks soaring eucalypt forests and stretches of green, the location of the popular summer alfresco concerts which have featured performances by Sting, Chris Isaak and Carole King in recent years.

The restaurant was full and buzzing with chatter on the day we visited, and after enjoying my artfully-presented miso braised pork belly, scallops, ponzu and shichimi, I can understand why – hands down the best pork belly I’ve ever eaten. Work off your lunch by taking a stroll around the estate’s lush grounds, or head down to the cellar art gallery which showcases the full collection of Art Series labels featuring works by some of Australia’s favourite artists. An experience not to be missed. Prominent winemaker and iron ore heir Michael Wright left an outstanding legacy in Voyager Estate which features South African Cape Dutch-style architecture and an expanse of breathtaking manicured gardens.

The picture-perfect entrance extends to the main Wine Room, a wonderfully warm zone where you can partake in the iPad guided sit-down wine tastings, purchase a bottle or two of your favourite drop or simply wind down by the fireplace. The room’s magnificent chandelier, adorned with branches of delicate silver maple leaves, remains etched in my memory.

I enjoyed one of the in-depth educational tastings in ‘Michael’s Room’, a compact yet beautiful space fitted with French oak cabinetry, soft greys and low-hanging pendant lights. Our host was a sommelier named Claire who radiated a level of professionalism, enthusiasm and passion which is hard to come by – an absolute star.

Follow your wine education with a crash course in luxury food at the estate’s restaurant headed by executive chef Nigel Harvey where a range of dining options is available, including degustation and the acclaimed weekend High Tea, and end your visit in the resident Rose Garden; a truly picturesque location fit for romance.

If you’re looking for a memorable lunch or dinner experience, make your way to Margaret River’s Wise Vineyard Restaurant which has breathtaking views across bushland right out to the waters of Geographe Bay. The hearty, characterful menu is the best way to warm up from inside out on a chilly night – my pork ragu papperdelle certainly did the trick – and the staff ‘s knowledge of the dishes, wines and general attentiveness was truly outstanding.

The Pullman at Bunker Bay, although a little trek outside the main areas, houses the Other Side of the Moon Restaurant, a modern dining experience which is well worth the trip. We were particularly drawn to the resort’s lounging area nestled beside the restaurant – sandstone feature walls, deliciously cushy armchairs and a roaring fire had an almost hypnotic effect on the crisp night I visited.

When you come across a number of locals who claim The Studio Gallery and Bistro at Yallingup as their favourite restaurant, you know you’re on to a gem. Dining tables are set amongst a selection of ever-changing artworks, and the food is truly wondorous – rabbit rillette, pear emulsion, pickled rhubarb and almond and currant salsa are just some of the foodie highlights to feature on the menu.

After visiting the Geographe Bay region, I have concluded that it’s the passionate locals and their genuine sense of hospitality, warmth and shining commitment to the integrity of their products that make this region all the more appealing. Other Australian food and wine
destinations take note; Geographe Bay is doing it right. A truly profound food and wine experience which will stay with you long after you leave.

A trip to Yallingup’s Ngilgi Cave. Be guided along the snaking boardwalks amongst a stunning array of crystal formations while learning of the romantic secrets the cave holds. Keep your eyes out for the love-filled inscriptions and historic artefacts. Leeuwin Estate Wine & Food Flight – Red

The Vasse Virgin Olive Oil factory in Margaret River. A range of beautifully-displayed olive oil and herbal body, household and food products which are perfect as gifts or as a personal indulgence. Locals rave about the ‘Macadamia Pesto’, and my ‘Chamomile and Lavender Body Polish’ is now a scrumptious weekly ritual. Definitely a piece of Margaret River you’ll want to take home with you.

WHEN YOU’VE HAD YOUR FILL:

Do your mind, body and soul a favour and head to Samudra in Dunsborough, a holistic vegan-yoga-health wonderland which will leave you walking on air. The yoga classes are like a spiritual and physical massage, teamed beautifully with wholesome vegan dishes, smoothies and desserts available at the cafe.

FOR A SPECIAL SOUVENIR:

Pop into John Miller’s jewellery studio for a range of stunning handmade silver pieces. Described as “heirlooms to be treasured”, the range of silver jewellery dotted with Argyle diamonds, Broome pearls and gemstones doesn’t come cheap, but is an artful investment which will transcend the decades.

Virgin Australia operates flights to Perth from a number of capital cities including Brisbane, Melbourne and Sydney, as well as a selection of major WA ports such as Broome, Kununurra and Newman, starting from $84.

Geographe Bay is approximately three hours outside of Perth, so hiring a car from the Perth airport is preferable. The region also offers a range of tours, taxis, designated drivers, buses and local car rentals.