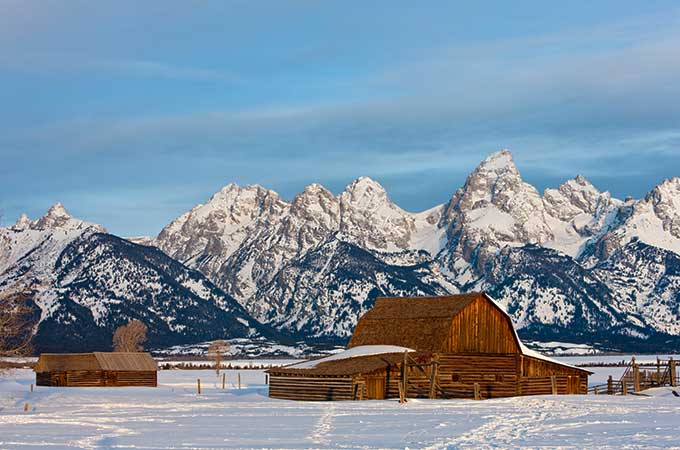 Helen Hayes heads into the wild, white yonder of Wyoming, braving the slopes of Jackson Hole and experiencing a host of other winter wonders.

Driving down the narrow country road, peering through the white landscape made even whiter by falling snow, our driver slows and asks in his cowboy drawl if we have seen a moose before. We reply in the negative, and his face lights up as he says, “Well you have now!” Sure enough, a real live moose nonchalantly struts over the road right in front of our car, a young calf trotting behind her. “Welcome to Wyoming,” the driver grins.

We are in Wyoming for an active yet romantic winter sojourn to tackle one of America’s best ski resorts – Jackson Hole – with a few outdoor adventures thrown in. Everything about this part of the world is romantic, with the landscape looking like something James Cameron might dream up. The aptly named Grand Teton National Park – named by French fur trappers who thought they looked like … well, big teats – is achingly beautiful, with its rugged peaks jutting towards the heavens; the surrounding landscape seemingly bowing at its feet.

Jackson Hole is within the National Park, so not only do you enjoy world-class scenery, but world-class skiing and snowboarding as well. We stay in postcard-pretty Teton Village in the shadows of Jackson Hole’s two peaks – Rendezvous and Après Vous – which offer 1011 hectares of terrain, 116 named trails and 13 lifts, including the Tram, which carries 100 people at a time. A new chairlift, the Teton, will open for the 2015/16 season.

Jackson Hole is pretty much the Holy Grail of snow resorts, and while we are a little worried that we are not good enough skiers to do it justice, we ride up into the heavens and wear ourselves out exploring the powder-topped runs over both peaks. We even go up the Tram, with 98 of our new best friends, to the Olympus-like summit of Rendezvous Mountain.

At 3185 metres, the bird’s eye view over the valley, or Hole, is astonishing, everything covered in layers of wedding white. With the run down from here for experts only, we cosy up over a hot chocolate in the ice-clad Corbets Cabin, before enjoying a front row seat on the downhill tram ride. All that fresh, mountain air and thigh-burning exercise certainly whets the appetite and we are spoiled for choice. Lunch is at the fabulous Couloir Restaurant at the top of the Bridge Gondola, a much-lauded restaurant with sensational meals – most prepared using local produce.

As for the views, they are so beautiful that it is only right to toast with them a glass of wine. At the end of the day, when our legs can carry us no more, we collapse by the outdoor fire at the Handle Bar at the Four Seasons Jackson Hole for a drink and a snack, and thoroughly enjoy dinner later in the evening at the Westbank Grill, an elegant steakhouse bedecked in timber and stone with a menu offering prime steaks cooked on a 1800° infrared grill, as well as an array of signature side dishes.

You don’t have to go far to see wildlife around Jackson. The National Elk Refuge is next to the town and provides a winter habitat for the Jackson elk herd. While the best way to get really close to the elk is by taking a horse-drawn sleigh ride in the Refuge, we choose to join a tour with Jackson Hole Wildlife Safaris. The Refuge is our first stop and guide Kyle is quick to point out some bald eagles, trumpeter swans and muskrats. We then drive into Grand Teton National Park, stopping for the aforementioned moose, a herd of bison, mule deer and big horn sheep precariously placed up a cliff face.

Kyle also shows us places that were used in the filming of the movies Django Unchained and the classic western, Shane. Driving around the scenic back roads and hearing about the history of the area just adds to our enjoyment. Being so close to Yellowstone National Park, we can’t resist the temptation and sign up for a snowmobile tour with Togwotee Snowmobile Adventures. It’s a full day and, after a good briefing on how to drive these snow beasts, we zoom off along the snowcovered trails into the oldest, and arguably most famous National Park of all. We stop off at Moose Falls, Lewis Canyon and West Thumb Geyser, with the absolute highlight being Old Faithful.

We see it go off, the hot stream piercing the cold air like a firecracker on a dark night. During the tour, we see bison salted with dollops of snow, and get the feeling that they are just as powerful as the mechanical beasts we are riding. They are magnificent up close.

While we could take a snowshoeing tour, ride fat tyre bikes, or try snowcat skiing, we opt to go dog sledding with Jackson Hole Iditarod Sled Dog Tours. Established by Iditarod veteran Frank Teasley, this is the real deal. We’re given the option of driving a sled ourselves, but choose to be passengers so we can enjoy the jaw-dropping scenery and take in the magic of the whole experience. The musher-guides point out wildlife and points of interest along the way, and the rest of the time we revel in the sounds of the runners sliding across the snow, the breathing of the dogs and the wind in our faces. We finish the tour at Granite Hot Springs, and after patting our new canine friends, slip into the soothing, hot waters of the spring for a soak in a picture-book setting.

For the perfect end to a week of action on and off the snow, we move into the town of Jackson, bunking down in western style at the historic Wort (as in girt) Hotel. We check out the many shops in town, coming away with a cowboy hat, some ski gear and some cool t-shirts, then have a pre-dinner drink at the Wort’s famous Silver Dollar Bar and Grill. The glass-topped bar covers 2032 uncirculated silver dollars minted in 1921; we didn’t count them. The atmosphere is convivial and the cuisine in the Grill is lip-smackingly good.

To finish off the night, we amble over to the Million Dollar Cowboy Bar, where Sandra Bullock recently had her 50th birthday party, and settle ourselves down in the saddle for a nightcap. And I mean saddle, because the bar stools are genuine saddles. The Bar has a big collection of western memorabilia, and most nights, you can try your hand at bootscootin’ or just listen to the live country music. Be warned, don’t plan for an early night – the vibe in here is infectious!

Getting there: Fly direct from Los Angeles to Jackson with United and Delta, from San Francisco with Delta and from Dallas with American. It’s a 30-minute drive from the airport to Teton Village.

Sleep: The Four Seasons at Teton Village / The Wort Hotel in Jackson