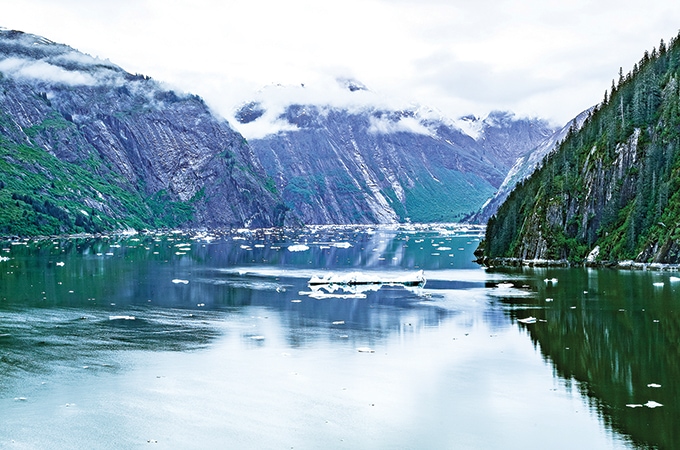 You could say that Alaska is undergoing its second gold rush, but this time it comes by sea, not land. More than a million people board luxury cruise ships every year to explore this magical part of the world.

Some people may find this hard to believe, but I have never cruised on a large ship. I know that millions of Australians are lured by the ten-storey slides, extravagant restaurants and sheer scale of the larger-than-life vessels, but my husband and I have always preferred smaller, boutique sailing cruises where there’s a maximum of about 200 passengers. Frankly, the thought of sharing public spaces with thousands of people day in and day out scares the living daylights out of me, but it was time for a change so we bit the bullet and stepped aboard the very elegant liner, Celebrity Solstice, for a seven-night cruise from Vancouver to Alaska.

Setting sail from Vancouver at dusk was pure magic, with the surrounding snow-capped mountains providing a dramatic backdrop. We slipped across the harbour like a graceful swan, made our way under the Lions Gate Bridge and headed north to Alaska via the Inside Passage.

Check the cruising bible, Berlitz Complete Guide to Cruising & Cruise Ships and you’ll find that Celebrity Solstice carries 2,850 passengers and more than 1,200 crew – a daunting number to a couple of novices like us, who thought we’d have to join a conga line of hungry people to get fed. Exploring the ship from bow to stern, what we found was truly staggering and more befitting a small city than a ship. First surprise: a half-acre of lawn (yes, real grass). Anyone for a picnic or game of bocce? I expected a casino, but not 10 restaurants (no conga line in sight!). Add to this 14 bars, two theatres, an art gallery, an arcade of shops, the famous Canyon Ranch SpaClub, a fitness centre, glassblowing studio, indoor solarium, outdoor pools and hot tubs, and a cosy library stocked with books. With 15 decks housing all of this, sharing was not going to be a problem.

Getting off the ship to see the sights was also not a problem, with more than 100 shore excursions on offer en route. There were 35 tours in Ketchikan, 38 in Juneau and a staggering 41 in Skagway. The exchange rate was not exactly Aussie dollar-friendly, so we were strategic in our choices – first up was a trip on a fast catamaran to explore the Misty Fjords in Ketchikan. Four hours of bumpy boating revealed gob-smacking scenery in one of Alaska’s most spectacular wilderness areas, where near-vertical cliffs wreathed in misty clouds erupt from the glacial sea valley. We spotted a bald eagle nesting high on a tree branch, a small brown bear rooting for food along the shoreline and a lazy harbour seal sunning itself on a rock. A pretty awesome introduction to Alaska’s famed wilderness.

Back in Ketchikan, which once held the title of ‘canned salmon capital of the world’, we walked to Creek Street, a historic red-light district built along the shores of Ketchikan Creek where, from July to October, you can see thousands of fish, desperate to go home, swimming vertically up the waterfall. Infamous for its ‘good-time gals’, Creek Street’s houses of ill-repute have been restored and painted in a rainbow of bright colours and now house trendy boutiques. But the most famous, Dolly’s House, painted in a pretty green, still gives a nod to its shady past with a sign that boasts, ‘Where both men and salmon came upstream to spawn’. Alaska’s capital, Juneau, only accessible by sea or air, was the next stop. As capitals go, there’s not much to talk about, but we did get a great photo of a humpback whale’s tail slapping the water on our whale-watching cruise, before driving to Mendenhall Glacier, a 20-kilometre-long river of blue ice.

Skagway was the final Alaskan port of call, a cute little town that was like walking through a history book, recounting the glory (or gory) days of the late-19th century gold rush. The poignant story, recounted by the ship’s historian, about this turbulent period and the many who died on the icy, treacherous White Pass while trying to reach the goldfields was mesmerising. We took a three-hour ride on the historical Scenic Railway of the World to the summit of the White Pass, 900 metres above sea-level. The scenery as we scaled the mountain on this engineering miracle was unbelievable – just like the stories accompanying it on this narrated journey. I could almost see the bedraggled column of men and horses dragging their mandatory one-tonne of supplies, inch by icy inch straight up the mountain for 30 vertical kilometres.

In every journey there is a stand-out time or place that lingers in the mind long after the memories of the rest of your holiday begin to fade. For me, it was the morning we entered Tracy Arm Fjord before heading on to Juneau. We were told we’d be visiting one of the most spectacular areas of the Inside Passage, and to be up at the crack of dawn.

I literally stumbled back in awestruck surprise when I stepped onto our balcony at sunrise. The morning was so special it’s hard to put into words, but as the ship made its way into this majestic fjord every passenger was either on deck or on their verandah, taking in the incredible scenery of magnificent mountains and tumbling waterfalls, carved from the virgin wilderness over millennium by melting ice. The captain navigated past a number of vivid blue, mini icebergs to the 18-mile mark, much further than any other ship could accomplish at this time of year (early spring), before making a three-point turn and heading back. It’s a moment in time that I will remember forever.

From Skagway, we sailed back along the Inside Passage to Canada with an overnight stop in Victoria – a wonderful city of beautiful gardens and interesting architecture, before heading to Seattle and the end of our voyage.  Cruise Alaska in 2017 with a seven-night Alaska Tracy Arm Fjord cruise departing 26 May. Closer to home, a seven-night South Pacific cruise departs Sydney on 13 April, 2017.

The main dining room, Grand Epernay, is so big it’s split over two decks, with a two-storey wine tower that stores more than 1800 bottles. The Oceanview Cafe on Level 14 offers all-day and night dining, without a smorgasbord in sight. Food stations serve a variety of cuisines – it’s very popular, so you might see the odd conga line or two here. Speciality restaurants (you pay a surcharge) include the Mediterranean-inspired Tuscan Grille, Silk Harvest for Asian delights and the very stylish and highly awarded, Murano.

The ship is home to The Canyon Ranch SpaClub, noted as one of America’s best for almost 40 years. An eight-page brochure lists everything from acupuncture to teeth whitening – I went for a hot stone massage and the therapist was one of the best I’ve ever had.

Images by Dan Bannister and courtesy of Celebrity Solstice