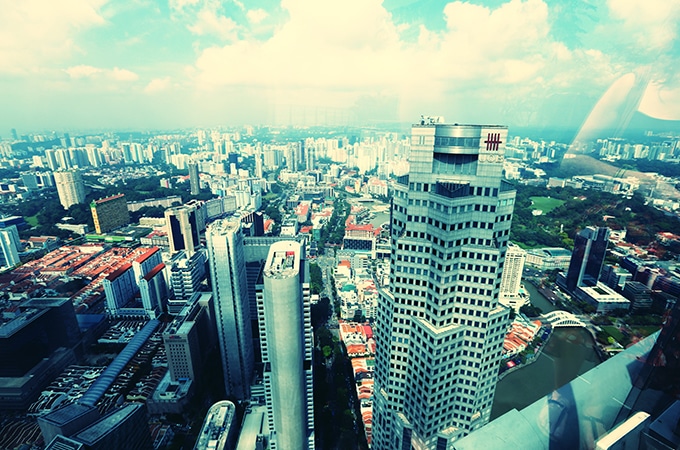 Teeming with food, bars, shopping, wildlife, day-spas and swanky hotels, Singapore has all the vices covered. The diamond shaped compact metropolis may be deemed unadventurous for the intrepid traveller but is ideal for sojourning lovers. It’s safe to walk around any time of the day or night, the food is sanitary and you can practically eat off the immaculate streets. Who wants to worry about a disgruntled tummy or your safety in the wee hours when other attractions beckon both far and by your side?

Go for broke at 1-Altitude, the world’s highest alfresco bar, and sip deadly cocktails 282 metres above sea level. Slink around on the lounges lit up in soft pastels until 9.00pm when the lighting switches to multi-coloured disco hues and the mood grooves. You know you’re soaring when you can look down on the nightly laser-light show at Singapore’s landmark Marina Bay Sands. The complex includes a sky-park with one of the city’s finest restaurants Ku De Ta, and a sexy infinity pool trickling off the edge of the 57th floor. Craving more giddy drinks? Check out the red lantern affair at Kinki Rooftop Bar or the quirky Mr Punch Winebar decked out in vintage signs above the Mint Museum of Toys.

Chinatown heaves with markets, tea houses, and dim sum. Here you’ll find everyone’s favourite, Maxwell Hawker Centre, and with around 100 stalls there is serious debate over who has the best fish head curry and laksa, but Tian Tian consistently attracts long queues for its chicken rice. The Satay Club may have relocated several times since its opening in 1940, but the open-air stall in its current location at Gardens by the Bay continues to waft heavenly barbequed meat across the city. East Coast Seafood includes several seafood restaurants with Long Beach famed for its crab doused in black pepper crab to be torn apart with abandon.

Just 30 minutes from the concrete jungle, a more exotic one awaits at Singapore Zoo with Asia’s first and only river-themed wildlife park. The River Safari gives visitors the opportunity to get up close (but not too personal) with capybaras (world’s biggest rodent), jaguars and flamingos on a boat ride through a mock Amazon. The experience includes cheeky interactions in the Squirrel Monkey Forest and the Amazon Flooded Forest with frolicking manatees, giant river otters and turtles in a simulated flooding of the Amazon rainforest. The highlight for many are the pandas in the Yangtze River Zone in the Rivers of the World which also includes species from the Congo, River Nile, Ganges, Murray and Mekong Rivers. Combine the River Safari with an exploration of the zoo, night safari and the Jurong Bird Park allowing for at least a couple of days to get wild.

With 77% of Singapore’s 5 million residents being Chinese with a mix of Malay, Indian and Eurasian, relish in the multiculturalism while caressing the Persian rugs on Arab Street in Kampong Glam, splurge at the Mustafa Centre, the 24-hour shopping complex in Little India or haggle over the tea sets in Chinatown. Once known for its seedy nightlife, Bugis Street is now notorious for its cobblestone lanes teeming with over 800 clothing and souvenir shops and eateries. Lose yourself and credit rating in the city’s largest retail and lifestyle destination Vivo City before collapsing on the rooftop amphitheatre and sky-park. Orchard Road isn’t for the faint-hearted and with over two kilometres of high-street fashion interspersed with high-end shopping malls, stilettos mightn’t be at the top of the list. Don’t despair as there’s plenty of eateries to refuel, this is Singapore after-all. Go mad during the Great Singapore Sale which runs for eight weeks from 30 May until 27 July with bargains all over the city.

A few minutes away from the CBD an oasis awaits within Bishan Park 2 at Aramsa Spa. Drawing on a mix of eastern and western techniques, packages include energising, rejuvenating and relaxation therapies as well as aesthetic treatments like facials, nail treatments and shaping-up programmes. The national park includes river plains including Kallang River crawling with wildlife and several dining options from casual brunch to cuisine as healthy as nature intended to a candle-lit garden sanctuary.

The colonials amongst you will retreat to The Raffles Hotel, named after the island’s founder Sir Stamford Raffles, for a Singapore Sling beneath the mechanical rattan fans. Or snuggle up at Tanjong Beach Club on Sentosa Island for a sandy chill and cocktails lingering long into the night.

Fly: Low cost airline Scoot now flies from the Gold Coast, Sydney and Perth prices starting at $129.00 with upgrades to business class for an additional $129.00.

Sleep: Novotel Singapore Clarke Quay and stay in an Executive Room with wi-fi, free canapes and drinks during happy hour, breakfast, nespresso machines in rooms at the convenient location of Clarke Quay. Join the loyalty program for special offers and benefits.

Getting around: The MRT is efficient and taxis are cheap and clean with English speaking drivers.

Most Romantic:
Really spoil yourselves on the 62nd floor, one below 1-Altitude, at Stellar with a decadent menu which includes kobe beef, quail, charcuterie, imported cheese and handcrafted patisseries and those knock-out views.

Couples will love:
The Blissful Love Package at Aramsa Spa which includes a Soft Blossom Body Rice Buff, Kinmoxei Lime Ethereal Massage and a Hinoki Floral Petal Bath sure to leave you relaxed and reconnected with your honey.

Don’t miss:
Singapore comes to life after dark and join a Secrets of the Red Lantern walking night tour through Chinatown and Geylang and learn about Singapore’s scandalous past of opium dens and brothels.

Writer was a guest of the Singapore Tourism Board and Scoot Airlines.