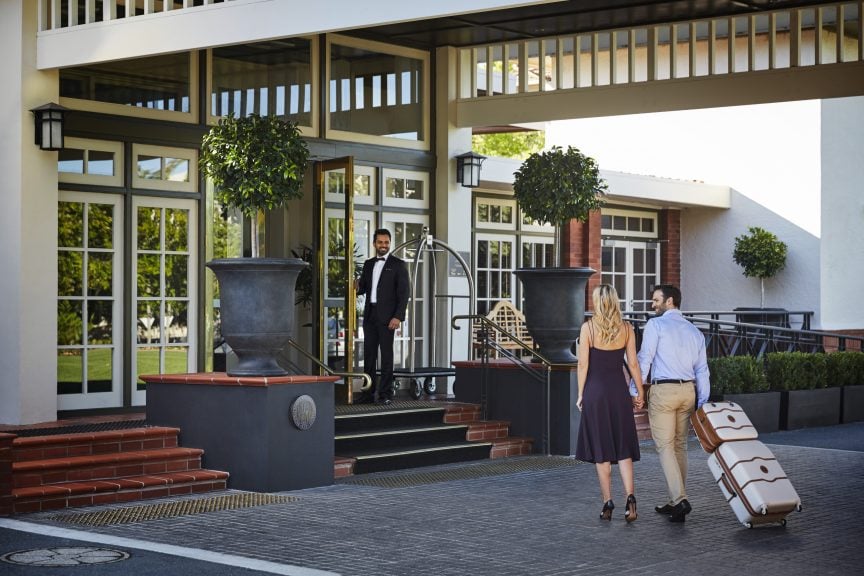 Canberra is steeped in Australia’s history so when you’re in town to get a taste of the national narrative, there’s no better place to stay than the city’s most historic lodgings, the stately Hotel Kurrajong.

The Hotel Kurrajong was a private lodge for politicians before it was a hotel so its lobby floorboards have creaked under the polished shoes of countless MPs, senators, ambassadors, prime ministers and visiting dignitaries. Even the Queen of England’s royal feet graced them when she visited in 2000. Covering some of those boards today is a spectacular rug created for the hotel by costume designer and Australia’s most-awarded Oscar winner, Catherine Martin.

Next door to the lobby is the ballroom that hosts Canberra’s annual, 1920s-themed Gatsby Ball – one of the ways the Kurrajong neatly weaves the old with the new. Also leading off the lobby is Chifley’s Bar & Grill, which serves succulent steaks and a list of more than 50 whiskies, plus one or two that only come out of the cellar on special occasions. One is a Johnny Walker Gold Label, a blended whisky that the bar crew use to create the hotel’s signature Benny’s Double cocktail, which is garnished with 23-carat gold leaf.

From this core of the hotel, you pad down quiet, herringbone-carpeted corridors to its rooms and grassy courtyards.

My wife and I had one of the four Executive Suites in the Heritage Wing. We had tonnes of room (44sqm to be precise) and looked out onto the main garden. The suite is used as a bridal suite on wedding days. The bride-to-be and her bridesmaids can get ready in comfort and privacy, then walk straight into the garden for the ceremony – an element which, no doubt, helped win the hotel a 2021 Brides Choice wedding venue award.

The living area had a comfy Tiffany-blue sofa and a cute writing desk, while the large bathroom’s big, round mirror was lit by a blue-white ring-light, which made us feel Insta-fabulous day and night.

One evening, getting ready for dinner, I wondered what former Prime Minister Ben Chifley would have made of this mirror… or Instagram for that matter. Chifley lived at the Kurrajong during his period in office (1945–1949), favouring it over the official residence, The Lodge. He walked to work, in what is now Old Parliament House, returning in the evening to a customary glass of whisky at the Kurrajong.

There are nods to Chifley throughout the hotel, including a special Chifley Experience package, offering guests a room-and-breakfast stay in one of the Executive Suites, a glass each of whisky on arrival and $50 off dinner at Chifley’s Bar and Grill.

Hotel Kurrajong uses its different spaces cleverly, to work with Canberra’s seasons. The interiors are cosy for the city’s chilly winters, while the outdoor spaces are perfect for summer lunches and evening drinks. We stayed in autumn, our favourite season in the capital as the streets and lakeside paths are on fire with red-leafed maples and oaks.

We sat in the main garden for hors d’oeuvres and cocktails before heading into Chifley’s Bar and Grill as a cool evening breeze picked up.

Whisky is a thing at Hotel Kurrajong. It reflects Chifley’s love of the ‘water of life’ but it also comes in quite handy as a winter warmer during Canberra’s cold spell from May to September. The hotel even has a special weekly event – Whisky Mondays – where you can taste a variety of malts and learn a thing or two about the drop from the hotel staff. The signature whisky cocktail is a Benny’s

I can think of few better things to do on a wintry Monday evening in Canberra than sip single malt at the Kurrajong.

If whisky’s not your poison, make a date for Old-fashioned Thursdays, when the bar crew serve up elegant martinis, margaritas and more.

Summer evenings sipping cocktails in the garden courtyard, cosy winter nights over dinner in Chifley’s Bar and Grill, a romantic hour or two at the Australian National Gallery (Hotel Kurrajong has a partnership, with free tickets including in some packages), walking or cycling pretty much everywhere and being surrounded by Australia’s history.