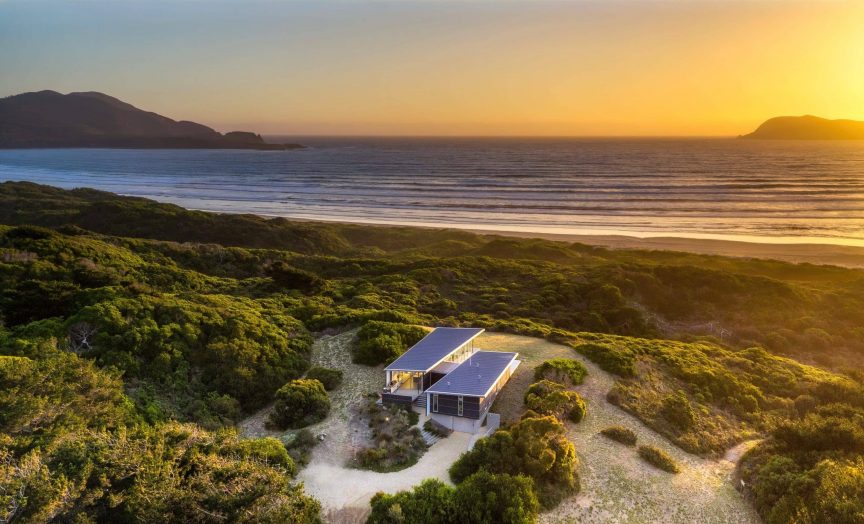 In the far south of Bruny Island, off Tasmania’s southeast coast, at the end of a forest track felted with pine needles, is a remote, modern and spectacular beach house. For solitude, romance and sheer awe, it is hard to beat.

The Cloudy Bay Beach House is a long way from pretty much anywhere and that’s the point. The place offers a genuine escape from people, noise, stress and the rat race. These are replaced with serenity, comfort, achingly beautiful wild ocean views and the sounds of birdsong, wind in the trees and the odd potoroo snuffling through the undergrowth.

If the wind is onshore, you’ll hear the waves crashing as you arrive. Then, swing open the front door and the south-facing glass walls of the house reveal a breathtaking vista: a spread of native bushland leading down to the white sand and turquoise surf of Cloudy Bay Beach.

You’re not sure what to wow at first: the spectacular view or the equally amazing house, a modernist, single-storey, architect-designed gem that sits unobtrusively in its natural surroundings. This is all part of the ethos of Brunyisland.au, the company that runs the Cloudy Bay Beach House, along with several other amazing properties on the island. The team is passionate about the preservation of Bruny’s wild beauty and rich cultural landscape, and enabling people to experience this natural magic while leaving as small an environmental footprint as possible.

The house’s modernist design contrasts with the ancient and largely unchanged landscape, yet it doesn’t impose on its surroundings.

The main space combines the kitchen and dining and living areas. Floor-to-ceiling glass walls dominate, allowing you to gaze at the 5km-wide arc of Cloudy Bay Beach and look north to the surrounding forests. There’s a slender horizontal window by the kitchen sink so even when you are washing up you get to spot birds and animals in the bush.

If we hadn’t been on a fitness campaign that involved beach runs, bush walks and ocean kayaking, we would quite happily have spent all day every day in the cowhide armchairs and comfy sofas, marvelling at the views. Occasionally we spotted something that had us scurrying to the house’s telescope; a large bird wheeling above the beach or what we thought was a seal or dolphin in the waves but turned out to be a wet-suited surfer.

If you book the place just for you and your loved one, you get the pick of the three bedrooms. The master is the best, for the views. We woke at dawn on our first morning and sat in bed with mugs of tea, watching the early light kissing the tufts of spray on the waves and spotlighting the colourful birds dashing about the bush. The beach is part of South Bruny National Park, so the wildlife is abundant and some of it rare. A Scarlet Robin was singing on that first morning, welcoming us to the neighbourhood.

Our immersion in nature – albeit from the supreme comfort of a luxurious beach house – meant we shifted our routine. We were in bed by nine, asleep not long after and then up each morning to catch the dawn. When you’re living in a glass-walled house that reveals natural glories all around you, you don’t want to miss a second of daylight.

The master bedroom had one of the most comfortable beds we have ever slept in – five-star hotels included – its own en suite bathroom and enough storage space for those staying a month, let alone a week. There was also a Dyson heater/cooler. We were there in autumn when it was mild enough not to need it but I’d imagine it would be cosy to have the heat in winter.

This is a private house for rent so it’s DIY food and drink, but it has a fabulous, modern, fully fitted kitchen in which you could cater for 50, let alone just the two of you! There’s also a north-facing deck with BBQ.

Bruny’s rusticity is one of its drawcards – long may that remain – so you won’t find supermarkets on the island. You will need to stock up on food basics before you get on the ferry from the mainland, which you can do sustainably at farmers’ markets in southeast Tasmania.

What you will find on Bruny are some amazing specialist food and drink producers – everything you buy from them is made on the island. En route to Cloudy Bay, we bought wheels of washed rind and smoked truckle cheese at the Bruny Island Cheese and Beer Company, one of which was preserved in vine leaves and irresistible. From the same place we bought a huge loaf of rye bread and bottles of Bruny porter and IPA beer.

Near the cheese place was an oyster outlet which went by the glorious name of Get Shucked. We bought two dozen and a haunch of smoked salmon too. Last stop was Bruny Island Wine, Australia’s most southerly vineyard. We dropped in to get a bottle of Riesling but left with several bottles of their delicious apple and ginger cider instead.

With this bounty, we ate like a king and queen in our modern glass palace by the sea.

The complete serenity, the breathtaking views, the chance to experience your own luxury beach house and the natural wonders of this most spectacular island. A stay here connects you with nature, reminds you about its healing powers and leaves you refreshed and ready to face the world again.

Want more on Tasmania? Here’s our guide to spend 14 incredible days there.