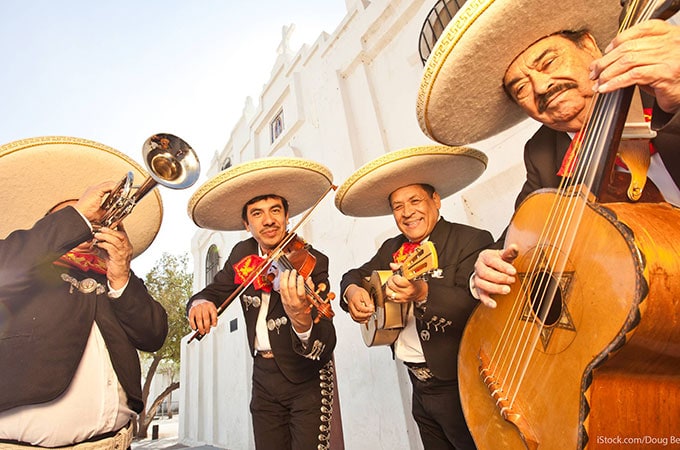 One of the world’s most exciting events, Cinco de Mayo is set to transform the streets of Mexico into a colourful wonderland of parades, festivals and mariachi performances on May 5. Commemorating the Mexican army’s 1862 victory over France at the Battle of Puebla during the Franco-Mexican (1861-1867), the annual event has grown to be an extravagant celebration of the Mexican culture and is enjoyed across the globe.

If you’re itching to get amongst it all, here’s the best spots to go to this year.

Mexico’s biggest Cinco de Mayo celebration, Puebla’s festival takes you back where it all began and features an impressive military parade, plus 20 days of cultural performances and carnival festivities.

With a large Mexican-American population, Market Square in La Villita is another great spot to celebrate the event. A somewhat unofficial start to Cinco de Mayo, Fiesta San Antonio is a huge nine-day party held there at the end of April, celebrating Texas and its hispanic community.

A celebration of all things Mexican, Corona and Beach Burrito Company Bondi have put together a fiesta in honour of Cinco de Mayo, complete with face-painting by local street artists and the first-ever Taco Time Trials Eating Contest.

For something a little different, head to the Abbotsford Skydive Center in Vancouver. The Center hosts an annual Cinco de Mayo skydiving event, complete with Mexican food, an air show and live music.

Perhaps most unique of all the Cinco de Mayo celebrations is the annual air guitar competition held at the local Hard Rock Cafe in the Cayman Islands. Live music, American cuisine and much drinking are also on hand. While hardly a celebration of Mexican culture, it is, at the very least, a tribute to liberalisation itself.