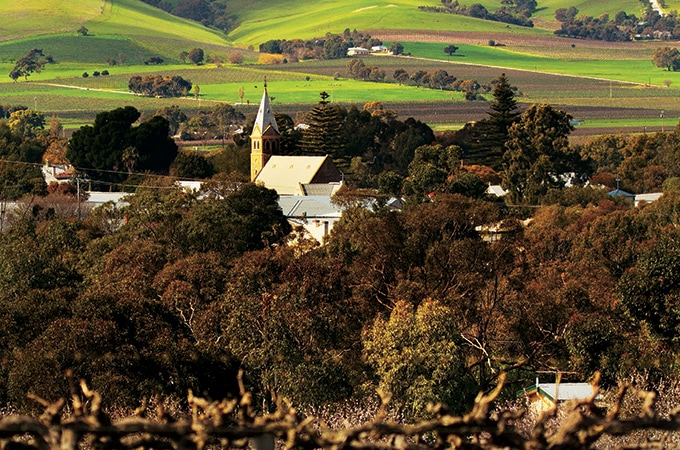 Wining and dining is part of life in one of Australia’s most bountiful regions. In fact, the Barossa’s cup well and truly floweth over, discovers Tricia Welsh.

South Australia’s Barossa might be one of the world’s great wine regions, but wine is not the only aspect of the 30 kilometre-long valley that draws around 900,000 visitors each year to ‘consume’ and ‘be consumed’ – as their latest promotional thrust suggests.

About an hour north of Adelaide, the region is an easy day’s excursion, but with its myriad attractive villages – all different and all still strongly European – the region warrants several days to appreciate its ever-growing list of artisan food producers, exciting restaurants and cafes, and world-class accommodation.

In Nuriootpa, national treasure Maggie Beer’s original Pheasant Farm restaurant has morphed into a stylish Farm Shop and is a major drawcard for food lovers who come to taste and buy her delicious range of 80-plus products, many of them seasonal. Peaches, apricots, pears, apples and plums are harvested from Beer’s own orchard for use in some of the shop’s exclusive dried fruit products. Visitors can buy a picnic basket of goodies to enjoy as a light lunch overlooking the dam. They can also join in a daily afternoon verjuice demonstration class in the shop’s studio kitchen used in the ABC series The Cook and the Chef that replicates Beer’s own farmhouse kitchen nearby.

In Angaston, winemaker turned cheesemaker Victoria McClurg celebrates 11 years making cheese in her appealing purpose-built shop/factory for her Barossa Valley Cheese Company. Primarily using milk from a 180-head Friesian herd in Koonunga, the factory’s four cheesemakers produce handmade cheese four times a week. They also make goats cheese for nine months of the year: “We make soft cheese, and a bit of aged goat’s cheese matured in our Adelaide cellars,” adds Victoria. She recently secured the talents of UK cheesemaker Mike Reeve who has been making cheddar for 18 years in Dorset and is excited about producing their first Barossa cloth-bound cheddar cheese. Once the milk is separated, Victoria keeps the whey for winemaker Wayne Ahrens to spray on his biodynamic and organic vines and gives some to her Italian neighbours to use in their piadini.

Next door, newcomers to the valley Fiona and Matteo Carboni use much local produce in their casual Italian dishes (including their neighbour’s cheese) in their welcoming Casa Carboni – an enoteca and Italian cooking school. A wine export manager from Melbourne, Fiona met Matteo from Emilia Romagna in 2005 when he came to do a vintage in the Victorian Pyrenees as an assistant winemaker. They moved from Parma in northern Italy to the Barossa in late 2011 and set up business in the main street of Angaston just over a year ago. They serve terrific coffee, authentic imported Italian products and offer cooking classes by appointment. Saturday morning cooking classes are enormously popular and begin at the Barossa Farmers’ Market where Matteo selects food for the class, returning to create four dishes with students for lunch.

In fact the Saturday morning Barossa Farmers’ Market is a great way to see just how productive this exciting area is. Now in its eleventh year, the market has trebled its original size and evolved to become one of the most successful and comprehensive farmers’ markets in the country. With some 45 stallholders and small producers, the undercover market is held every Saturday throughout the year in the barrel-lined Vintners Sheds in Angaston. Look for Hutton Vale lamb, Saskia Beer’s Barossa Farm Produce, Weich’s traditional Barossan handmade egg noodles, Domain Day’s balsamico and vin cotto made from estate fruit, Smallfry Wines zesty verjuice made from organic and biodynamic grapes and Jersey Fresh milk and cream. Go early before the best produce is picked over and when you are likely to bump into top chefs, winemakers and – isn’t that Maggie Beer over there?

In recent years, the local dining scene has been kicking massive goals with a handful of restaurants that would not be out of place in discerning city environs. Hentley Farm, although not even two years old, is housed in a beautifully restored 1840s old barn, the winery itself being rated five-star by James Halliday. Its innovative menu uses top regional produce, often with a touch of molecular magic, to complement their multi-award winning single estate wines. Try the Menu du Jour (four courses that often stretch to eight) with matching wines that might start with plump Smokey Bay oysters with fresh passionfruit juice over a bed of rosemary and plumes of dry ice followed by blue-eye travalla with aerated parsnip and puffed wild rice – perfect with the Eden Valley 2013 riesling or smoked Barossa Plains beef with homemade sauerkraut, pumpkin seeds and wild fennel with the estate 2011 The Beauty Shiraz. The sweet treats to finish are a visual and palate surprise.

In a lovely historic bluestone villa in Tanunda’s main Murray Street, fermentAsian might seem an unusual fit for this wine region, but Vietnamese chef/owner Tuoi Do impresses with her take on modern South-East Asian fare – with an impressive wine list. Opt for the chef’s menu of perhaps three entrees and four main courses which might include fresh betel leaves with sticky caramelized Berkshire pork, Hanoi spring rolls like you’ve never tasted before, red duck curry, plump grilled prawns and Barossa Berkshire pork belly with ginger and orange sauce. Finish with fudgy-chocolate ice cream on poached pears or perhaps the best lime crème brûlée in the country.

You don’t have to be a guest at The Louise to dine in the highly acclaimed Appellation restaurant, but you’d be denying yourself one of the best accommodation experiences in the valley. With views from every window, this 15-room luxury vineyard retreat has the lot. You can enjoy a gourmet breakfast with kangaroos – or have it served in the courtyard of your own villa and shower under the stars in your own private outdoor shower. Chef Ryan Edwards has been pleasing guests with his innovative regional dishes for six years now, winning countless awards along the way, making it one of the finest regional restaurants in Australia. There is a degustation menu, but the à la carte is so appealing, you might like to share a few dishes – such as fried Coffin Bay oysters with buttered salsify, a tasting plate of Williamstown Muscovy duck, grilled Spencer Gulf king prawns and squid, melt-in-the-mouth Hutton Vale lamb with celeriac cream or Saskia Beer’s Barossa corn-fed chicken with Linke’s lachs-schinken. All wines paired with food are local drops, enhancing the regional experience even further.

Set on 225 acres of undulating pastures near Freeling, Kingsford Homestead is a magnificent 1856 two-storey Georgian home better known as Drover’s Run in the TV series McLeod’s Daughters. It took three years to restore it to its original splendour and now offers seven luxury suites – all named after characters connected to its interesting history – from pastoralist Stephen King who built it through to Kerry Packer who bought it for the TV location, and current owners, the Ahrens family who are fifth-generation Barossan. With a two-night minimum stay, guests can dine alternately between the dining room and the original wine cellar where local caterer Stuart Oldfield produces an exceptional five-course degustation dinner prepared in the homestead kitchen.

While the region is particularly celebrated for its outstanding Barossa Valley shiraz and exceptional Eden Valley Rieslings, there is no shortage of things vinous to pursue, from cellar-door hopping (there are more than 80 you can visit), sampling wine from your birth year at Seppeltsfield (the only wine estate in the world to offer this), or even creating your own special blend at Penfolds Estate.

Plan to be back at Kingsford Homestead mid-afternoon to maximise your time soaking in the famous outdoor bush bath. You might wonder how you could spend an hour and a half in a bathtub installed in a secluded corner of the property above the North Para River, but given binoculars, a book on local birds and a bottle beautiful bubbles and you’ll be soon wondering where the time went.

Take in the beautiful view over the expansive neatly-tended vineyards from the Mengler Hill Lookout, the highest point in the Barossa. For art-lovers there is even a sculpture park worth investigating in front of the lookout.

When you’ve had your fill

Spend time trawling the antique and second-hand stores along Tanunda’s main strip. There are all sorts of treasures to be found, bearing in mind that the founding fathers of this region were all free-settlers from Silesia, many of them woodworkers and carpenters who made their own fine furniture and chattels using local timbers.

For a special souvenir

The Barossa is about one hour by car north of Adelaide on the Northern Expressway via Gawler or via the more scenic routes through Chain of Ponds or the picturesque Adelaide Hills.

The Louise offers luxury accommodation in 15 suites over several categories – the Seppeltsfield Suites are so beautifully appointed you could live there. With its excellent on-site restaurant, new spa facility and gymnasium, it offers the full package.

Lovers of McLeod’s Daughters will be excited to live the role of the landed gentry by staying in one of the spacious suites at Kingsford Homestead, known better as Drover’s Run in the TV series that ran for eight seasons in 117 countries. There is a two-night minimum stay, so plan to enjoy everything on offer – a drive around the property, dinner in the cellar and of course a luxuriating soak in the outdoor bush bath made famous in the TV series.

Hentley Farm is set among rolling hills on the banks of Greenock Creek at Seppeltsfield and is housed in stylishly restored stables among the vines. The boutique, single estate vineyard produces a surprising range of award-winning wines – all paired with innovative well-thought out dishes from top local produce.

The renowned Appellation has become a destination restaurant with luxury rooms as part of the lovely Louise luxury vineyard retreat at Marananga. Most of the produce used in its innovative menu has travelled fewer than 30 kilometres, some just metres away from its own kitchen garden.

In the heart of Tanunda, fermentAsian lures diners with a sense of adventure to sample modern southeast Asian fare with local wines. The chef’s menu at $59 per person is a steal for three entrees and four main courses. An intelligent wine list includes many local drops that mostly fly under the radar.