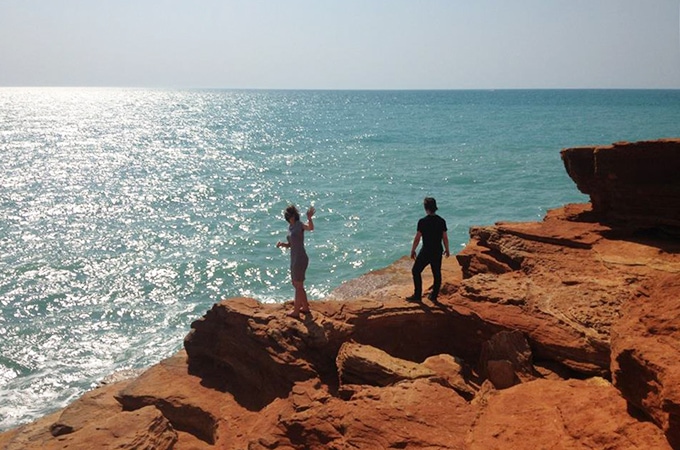 Couples looking for a short break in Western Australia will be very pleasantly surprised by all that this coastal town with a unique history has to offer. In Broome the staining red earth is spectacularly juxtaposed against a turquoise sea and if you’re lucky enough, you can see mother nature’s own stairway to heaven – the staircase to the moon. If fishing and four-wheel driving are your forte, or you just want to relish in the opportunity to have fish and chips on the iconic Cable Beach, Broome can satisfy any couple – just don’t pack any white clothes.

Strolling through the quaint township, nods to Broome’s settler history are emblazoned all around, but perhaps the most striking historical relic is Chinatown, with its interesting mix of Chinese and colonial architecture. In the early heyday of Broome’s pearling industry, Chinatown was the place to be for cashed-up pearlers who would retreat to the opium dens after a hard day at sea. While there are no opium dens today, in this main shopping district (and the most interesting in my opinion) you will stumble upon treasures such as little bookstores packed with forgotten second-hand works, boutiques, and of course Chinese restaurants and cute cafés.

After checking out Chinatown’s shopping district, take in a flick at Sun Pictures. Appearing in the Guinness Book of World Records as the oldest open air cinema in operation, opening on December 9, 1916 there’s no denying it has a certain old-world charm. In the up-market side of town, a visit to Paspaley will leave you thinking it’s really pearls that are a girl’s best friend. Renowned as having some of the world’s finest pearls, this is the ultimate Broome souvenir.

Now that you’ve discovered all of Broome’s urban treats, the real adventure starts. Take a morning, pre-sunset or sunset camel tour along Cable Beach, or just soak up the sun and watch the waves lap with your sweetheart. There are fishing trips, whale watching, fishing and four-wheel drive tours available for couples but if you have your own off-road worthy vehicle you have the freedom to explore some of the surrounding sites like fishing the Fitzroy River in complete solitude.

Not to brag, but this was my first time fishing and I caught a 78cm barramundi, so for experienced fishermen and women out there, who knows what you might hook!

Gantheaume Point is another must-see attraction, around six kilometres from Broome. It’s a popular weekend picnic spot for locals due to its gorgeous views of the Indian Ocean. For geology buffs the spectacular rock formations are a true treat and for dinosaur enthusiants, real dinosaur footprints are preserved in the reef rock which can be seen at low tide. As lifeguards do not patrol Gantheaume Point, there are replica footprints at the top of the cliff.

Couples visiting Broome from March to October have the opportunity to witness the natural wonder that is the Staircase to the Moon. When the conditions are just right, the full moon rises over the mud flats at low tide creating a beautiful optical illusion. Romantic.

Qantas fly to Broome from most capital cities once a week.

To read more about the pearling history of Broome, John Bailey’s book The White Divers of Broome: The true story of a fatal experiment is a must-read on the tribulations the industry and workers – many of whom were from countries across Asia and Indigenous Australians – faced in the early days.