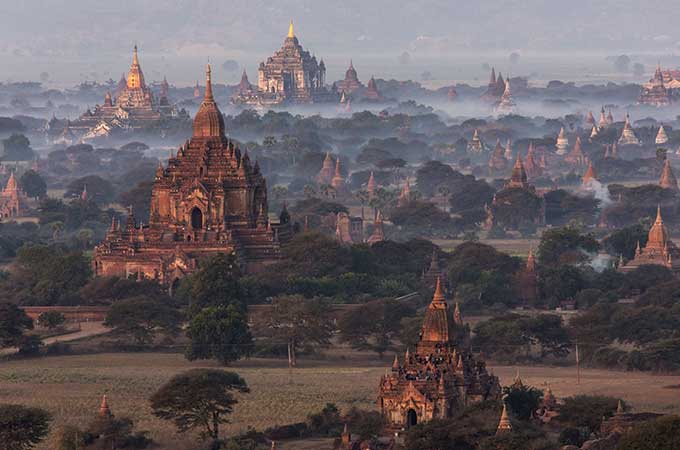 From its mystical rural landscapes, golden pagodas and embellished temples, Myanmar, previously known as Burma, offers couples a unique Asian destination for romantic adventures unspoiled by hawkers and crowds; a place where time might have stood still for five decades but which is now welcoming guests with open arms.

The setting sun casts a glimmering, golden light across the lake, throwing the 200-year-old teak U-Bein Bridge and the people crossing it into deep shadow, like characters in a shadow-puppet play. From our vantage point in a rowboat on Taungthaman Lake, glass of bubbles in one hand and camera in the other, this is just one more romantic, picture-postcard moment we’ve been enjoying on our Belmond cruise, but sadly, the last one before we leave for Bangkok the following day.

Our itinerary had started in the city of Yangon with two nights at the grand Governor’s Residence, a stunning two-storey teak mansion set in glorious grounds close to the heritage area and the astonishing Shwedagon Pagoda. Soaring over the city, this shimmering monument to Myanmar’s majority religion Theravada Buddhism, dominates the city skyline.

According to legend, construction began 2,600 years ago which, if true, makes it the oldest Buddhist stupa in the world – it’s also the most sacred religious site for all Buddhists.The stupa is covered in 60 tonnes of gold and thousands of diamonds, topaz, rubies and sapphires crown the finial…what a vision! Walking around this national treasure is the perfect introduction to this exotic land and its marvellously resilient people.

Myanmar has a long history of occupation and subjugation and for some time was a pariah state, but don’t let that deter you from coming. There’s an exciting air of confidence in the future now and the old capital Yangon is showing all the signs of a city in a hurry to catch up.

New apartment blocks, office buildings and hotels are in the pipeline, including the prestigious Peninsula brand and another Shangri-La… luxurious digs in a city that has known little luxury for a very long time. All of the upgrades to the infrastructure such as new drainage, bridges and roads have created the sort of chaotic traffic jams and blaring horns usually associated with cities like New York. Yet even all that roadwork and noise can’t tarnish the obvious charms of this city on the move.

The scene of major fighting between the Allies and Japanese in WW2, Yangon was known as Rangoon when the British ran it as one of Asia’s major trading ports. From being one of Asia’s most graceful and beautiful cities, Rangoon suffered much damage and decline in the war years and beyond. But if you are a history buff, a walk around one of the last early 20th-century landscapes remaining in Asia will thrill.

Many of the grand old Victorian, Italianate and Edwardian buildings, including the landmark Strand Hotel (still as impressive today as it was when built in 1901) are still here. A treasure-trove of tumbledown relics stained by age and weather bearing witness to the history of Rangoon. Our boat was waiting for us on the shores of the Ayeyarwady River in Bagan 500 kilometres north, so Yangon was a quick look-see of just one day, but that was enough to whet the appetite for future visits as the city transforms itself into another Asian powerhouse.

We arrived mid-morning in Bagan where Tin Aung, our personal Belmond guide who would accompany us on all excursions in the coming days, welcomed us with a large smile and a mini-van. Too early to board, we went straight to the old town of Bagan to see the remains of the once magnificent kingdom of Pagan, an amazing city of over 10,000 pagodas, temples and monasteries.

Built by a succession of Burmese kings from the 11th to the 13th century, the city was renowned for its religious centres and attracted monks and scholars from all over Asia. Now there’s around 2,000 religious buildings left, strewn across 67 square kilometres of the Bagan Plains. Many are plain brick stupas and pagodas sprinkled amongst the more impressive such as the famous Shwezigon Pagoda and Ananda Temple, a massive structure with four devotional halls each with a giant, golden Buddha sculpture… both buildings are mind-boggling in their size and adornments.

After a day spent engrossed in this awesome and unique area,one of the richest archaeological sites in South East Asia, and a visit to the local markets,we were ready to board the 43-cabin Road to Mandalay and let the river journey begin. We found life on board easy and relaxed. On the first night we mingled with other guests, around 60 like-minded travellers from the UK, USA, France and Australia, many of whom were also enjoying their first taste of Myanmar.

After pre-dinner drinks, we made our way to the elegant and sumptuously furnished dining room for the first of many wonderful meals served by impeccably dressed staff and accompanied by a good selection of wines. Guests are free to sit with others or enjoy a romantic dinner à deux. Belmond’s Road to Mandalay has been offering voyages here since 1997 (previously known as Orient Express) and their expertise shows in every way; from the service offered by the highly professional staff to the excursions and guides that are all part of your itinerary.

Related article: 5 UNESCO Sites in Vietnam Not to Miss

With a pool and spacious sun deck, library, spa and fitness centre, piano bar for pre-and post-dinner cocktails, observation deck and daily/nightly lectures and entertainment, guests lack for nothing. The cabins are roomy and comfortable with large windows to watch the passing river-side life. There’s a flat screen TV, desk, excellent bathroom with rain shower and Bvlgari amenities – and anything you want delivered to your cabin 24 hours a day is just a phone call away.

On our five-day Images of a Golden Land cruise, we travelled upriver from Bagan to Mandalay, stopping at Mingun, home to an enormous ruined pagoda with the remains of a giant lion statue guarding the ruin. Next day we moored off Mandalay and toured the city and the hills of Sagaing, the spiritual heart of the country. Everywhere we went, we immersed in the local culture with our wonderful guide Tin Aung, who gave freely of his bountiful knowledge so that we could see his country through his eyes.

His stories about the country’s history and local village life made us laugh, gasp and cry, especially when he told us how, after his mother suffered a heart attack, he saved to buy her a washing machine (an uber-luxury item) but then discovered she wasn’t using it. She said it wouldn’t get the clothes as clean as her hand-washing in the river! With Tin by our side, we wandered the halls and walkways of a nunnery in Sagaing, listening to the school children, dressed in pink and with shaved heads recite their lessons while the nuns prepared their one meal for the day. Had long conversations with the local women to enhance their English language as they accompanied us on our walks. Witnessed a junior monks induction ceremony with all the attending pomp and ceremony as small children, boys and girls dressed up like princesses were led on horses by their parents to the monastery where they would spend the next few weeks or years.

We also visited marble-carving, gold-leaf beating, lacquerware and silk weaving workrooms to witness how the gorgeous Myanmar craft wares are created. And as we climbed the hallowed steps of  monasteries and pagodas in Yangon, Bagan, Sagaing, Mingun and Mandalay, we were reminded of how religious the people of Myanmar are and how their absolute dedication to the teachings of Theravada Buddhism has seen them through so many dark and stormy days.

And so our adventure ended in the town of Amarapura with the romantic boat ride across Taungthaman Lake and the glorious sunset and shadow-play… a fitting end to what had been a wonderful week of exotic discoveries in this beautiful golden land.

Belmond will provide your entire itinerary including flights and transfers so your journey is fuss-free.

Getting there: To travel to Myanmar you must have a Visa which can be obtained from the embassy in Canberra.

Related article: Why You Need to Visit Hua Hin, Thailand