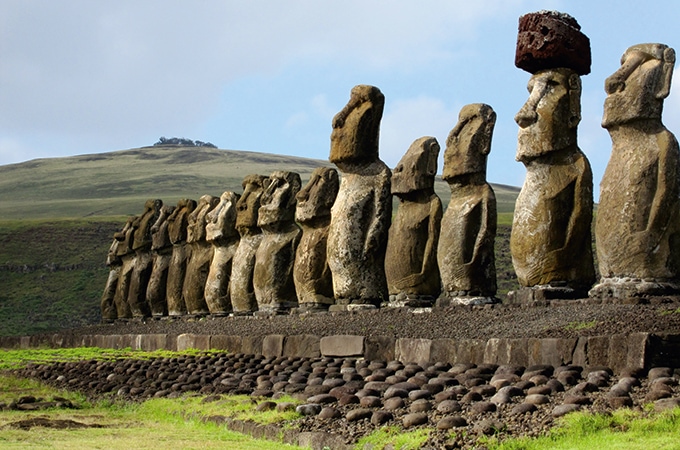 The megalithic monuments of Easter Island called moai stand like silent sentinels gazing solemnly through painted-on eyes over this tiny island which sits almost dead centre in the middle of nowhere. Why are they here, how did they get to where they stand and why were they destroyed by the very people who built them are all enigmatic questions without definitive answers, but it’s this very intrigue that brings us, and so many other travellers to this tiny, blink and you’ll miss it speck of land sitting 3,700 kilometres off the coast of Chile in the vast Pacific Ocean.

After leaving Patagonia we spent just one night in Santiago, which looked fascinating and had a ‘definite return trip’ sign pinned on it, before the five- hour flight to Rapa Nui, the indigenous name for Easter Island, where once again we stayed with Explora at the Hotel Posada de Mike Rapu situated in the midst of rolling green pasture in the centre of the island.

Stylishly designed by José Cruz Ovalle using natural, organic textures of stone and timber, it’s not until you’ve done a bit of exploring around the ancient sites that you realize that the hotel’s curves are based on the original native design of rock houses.This is the only five-star accommodation on the island and quite frankly, why you would stay anywhere else is beyond me given the quality of the private and public spaces, the food, the service and, best of all, their local Rapanui guides like Beno whose father and grandfather helped with past and present excavations of moai and who was an absolute font of local knowledge – it’s this sort of service that really sets Explora apart when visiting remote areas.

Beno was our guide for the three days we were here and it was through his eyes that we saw the history of his land unfold, as there is only oral history, passed from generation to generation, to explain what happened to the population of a once thriving nation of 20,000 or more to under 5,000 today.

Colonised by the Polynesians from the Marquesas Islands as early as the 13th century, their social strata was interesting in the way that higher castes lived in villages along the coastline whilst lower castes sited their villages in the interior.Their worship of ancestors manifested in the carving of moai which were then placed on a platform, or ahu, to protect their villages, with most of them appearing to be connected to the richer coast villages.

Records show that almost 900 moai were created, each taking up to one year to carve with stone chisels, so one of the first places we visited was Rano Raraku quarry to see where they were created out of the volcanic rock before being transferred to their designated ahu. It’s like an open air museum with up to a hundred moai scattered around the hills, most buried up to their necks and all sightless because it was only when they were placed on their ahu that the eyes were painted on.We also saw several unfinished carvings embedded in the rock wall, some half finished, others just started and wondered why the carvers had stopped, but even the knowledgeable Beno couldn’t provide an answer.

As we walked around the island we saw so many broken parts of moai- a head here, a body there, still lying where they must have fallen as they were being carted to their final destination but there were also others that had eyes, so they must have already been placed on their ahu … there’s more questions than answers here, such as how did they cart these gigantic stone monuments, some weighing up to 80 tonnes up to five or six kilometres over rough and rocky terrain? Why are there moai with eyes lying broken and scattered great distances from where they would have stood and why were the moai abandoned after centuries of worship?

Local lore provides a few different scenarios on how they moved these giants ranging from hundreds of people dragging them on rope pulleys over timber rollers (they say there are no trees left on the island as they were all cut down to provide rollers and scaffolding) to ‘walking’ them side to side (which could explain the high mortality rate of sightless statues as they over-balanced and tumbled) to spiritual ‘mana’ moving them magically! They also think that there was a battle between different villages, probably caused by food shortages, and that the moai were smashed when they destroyed the villages which is why there are remnants everywhere. One thing we do know for a fact was that in 1960 Chile was hit by the world’s biggest earthquake resulting
in a tsunami which battered Easter Island and swept many of the moai kilometres into the interior, but this was long after the cataclysmic event or events of destruction had already taken place.

Today some of the moai are repaired and back on their ahu, drawing visitors from around the world and providing the islanders with one of their only streams of income. Of course there’s other things of interest here: the restored village of Orongo with its stone houses buried into the hillside and its ancient petroglyphs, the small town of Hanga Roa where most of the islanders live (as there’s no electricity in outer areas) and where you’ll find a museum tracing the Rapanui culture and a few interesting shops and restaurants; and the stunning landscape of volcanic, lake filled craters and rugged, rocky coastline punctuated in places by white sand beaches and groves of imported palm trees.

It’s a long trip to get here but you’ll find that the memory of walking around this open air museum and seeing these world-famous, mysterious monoliths with your own eyes and drinking in the mysterious history of the island and its people is well worth the pilgrimage.

Words and photos by Rhonda Bannister.