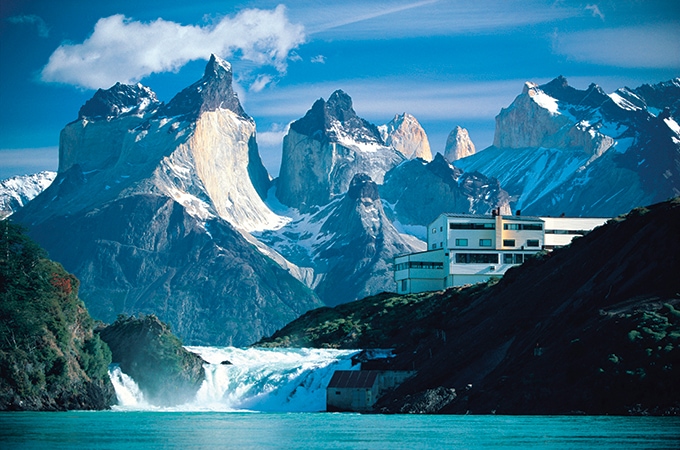 Patagonia is a remote and beautiful land of pristine mountains, giant glaciers, icy blue lakes and unspoiled wilderness literally situated at the end of the world. It’s part of two countries – Chile and Argentina – but an area unique unto itself, and as Patagonians will tell you, “it’s a long way from Chile”! Actually it’s a long way from everywhere and therein lies its charm… it’s so pristine, so wild and so pure that it will take your breath away.

Our destination had intrigued me from the time I first read a travel story about Patagonia with photos of Hotel Salto Chico sitting in isolated splendour on the banks of Lake Pehoe in theTorres del Paine National Park more than a decade ago. Sited on a rushing waterfall under the watchful gaze of the ‘towers’, three giant fingers rising like snow topped blades almost 3,000 metres out of the lush valleys and glacial lakes of the Paine Massif, I could tell that this part of the world and this hotel, with its stark, clean architectural lines was special, so I put it on top of my bucket list long before the term was coined!

Designed by internationally respected architects German Del Sol Guzman and José Cruz Ovalle and opened as the first Explora hotel in 1993, Hotel Salto Chico is everything you would expect; comfortable, homely, elegant, welcoming and glamorous. Just about every vantage point in the hotel – its guest rooms, dining room and public areas, is focussed on the spectacular, mesmerising view of the Massif, the lake, the waterfall and the surrounding hills and valleys. It may be a long way from anywhere but the hotel provides all the modern day communication conveniences so the world is really a lot closer than you think.

The hotel’s specialised explorations include around 20 half and full day treks – some to the top of the icy mountains and other easy and not so easy walks through the ravishing countryside of lakes and rivers where the air is so pure and the oxygen level so high there are certain plants growing here that are unusual to find anywhere else. Stand-out treks include a full day to Greys Glacier where you get so close to it in a boat that you can almost touch the ancient, vivid blue ice-pack and an arduous climb to the top of mountain peaks for those fit enough where, if you’re lucky, you’ll see a cougar or at least its footprints. More gentle pursuits include photographic safaris to capture the images of the graceful guanaco, a relative of the llama, the crafty grey fox or the Andean condor which rules the Patagonian skies – whatever your level of fitness, there’s an activity to suit, including horseback riding which I put at the end of my activity wish-list.

Even though I’ve always wanted to ride a horse I’ve been too scared to actually do it, so it was a personal watershed moment when, after enjoying a fabulous lunch prepared by one of the hotel’s chefs at the horse stables, I found myself strapping on leather chaps and mounting a horse! It was probably the false courage of two glasses of wine (or was that three?) but I felt no fear as I hopped aboard a very large steed for an hour’s walk through the pampas with our gaucho leading the way – we even got to trot as we forded a small stream … it was a ‘face your fear and do it’ kind of day for me and one of the best on our trip, so one should never say never!

The Patagonian weather is as wild and changeable as its landscape and is famous for its ferocious, gravity-fed katabatic winds that can rage for days at speeds of up to 150 kilometres an hour, so it wasn’t surprising when the weather changed from bright blue, sunny skies to grey clouds and sleet as we were trekking to Toro Vista Point not too far from the hotel the next day.

The walk up and down the hills surrounding lovely Lake Toro was pretty easy to start with but then a blinding wind came howling through the valley, ruffling the icy blue waters of the lake and hurtling a couple of birds backwards before swirling around our group of six, pushing us back on the path with such ferocity that we were bouncing off each other like bowling pins hit by a ball – I was the last pin and went down on my bum straight into a thorny bush – strike one!

Later that day as snowdrops swirled around our heads, we scampered down the steep timber steps to the recreation area by the lake to enjoy a massage, followed by a swim in the heated pool and then a soak in the outdoor spa with a glass of champagne to toast the end of this part of our trip, for tomorrow we were off to the most isolated, inhabited island in the world which amazingly is still part of Chile!

Related articles: A Walk in the Desert – Atacama, South America