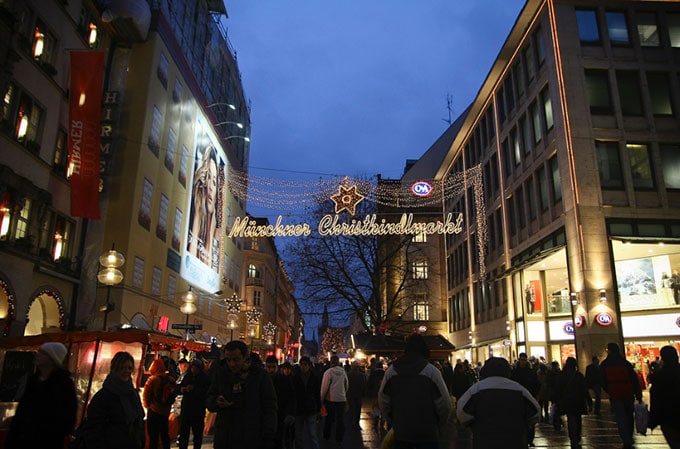 We sipped mugs of steaming hot glühwein as a choir sang carols in a nearby square and the first snowflakes began to fall. Children munched on ginger and cinnamon Pfeffernusse biscuits and stared longingly at flickering candles whose glass containers were wrapped with wooden friezes carved with scenes of Alpine meadows and Bavarian forests.

Someone dressed as St Nicholas wandered through the crowd offering festive greetings, and everywhere there was the scent of pine needles.

We were at the famous München Christkindlmarkts, the Munich Christmas Markets, which take over the Bavarian capital every December and are enchanting, romantic and refreshingly authentic.

We thought the event was one big central market but were delighted when the staff at our hotel – the cosy and friendly Cortiina – told us that it is a collection of smaller markets scattered all over the city.

There are some standard stalls that pop up in all the markets, such as the famous glühwein huts, small temporary chalets each run by a team of people (often a family) who are frequently enveloped in clouds of alcoholic steam issuing from the 10-gallon spigot pots. But each market also definitely has its own character; there’s even a medieval one (at Wittelsbacherplatz), which includes traditional Bavarian games and entertainment dating back to the 15thcentury.

The most popular market is the one in the main square, Marienplatz, but a short walk away is a smaller one, occupying a triangle of land between Pettenbeckstrasse and the Rindermarkt and noticeable by the presence of a tall windmill whose tower is covered with Christmas lights and whose base is a frantic sausage kitchen.

Another great one is in the Kaiserhof (Emperor’s Courtyard) of the Residenz Museum off Residenzstrasse where it meets Odeonsplatz (half of which is covered with Christmas Trees for sale). We showed up around 6pm and walked through the tall archway and into a Christmas wonderland with stalls selling coloured lanterns, hand-made wooden figures and toys and a plethora of Christmas biscuits and stollens. One was offering Glasierter Apfels (toffee apples), which went down very well with yet more glühwein.

Not only are the Munich markets charming and delightfully festive, they are also incredibly good-natured. You might think free-flowing alcohol and lots of people rubbing shoulders could be a recipe for disaster but the Germans are a polite bunch and the welcome is one of the warmest in Europe. I cannot guarantee snow but if you get lucky, that will be the icing on your Christmas cake.