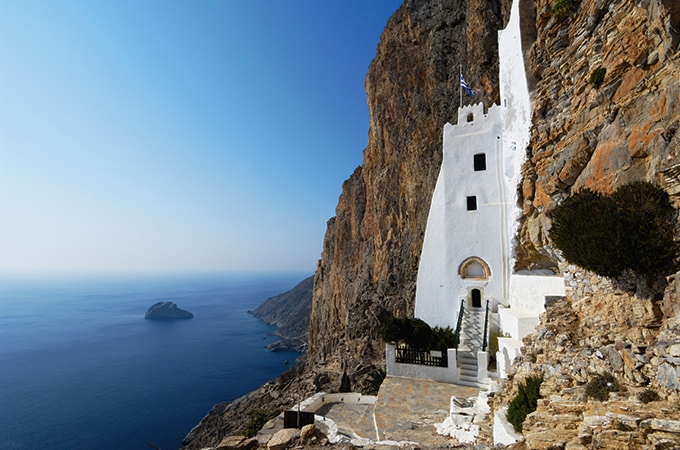 Crete is about as eclectic as an island can get. The largest Greek island at 8,300 square kilometres, and the most southerly land in Europe, it is a refreshing contradiction from the rest. Of a morning, couples might find themselves harbour-side at a bougainvillea-draped café watching fishermen disentangle their nets, by lunchtime listening to traditional Lyra music from a mountain village kafenia, by mid-afternoon, wading through the aquamarine waters of Elafonisi as the summer heat bakes time to a halt, and by night, shaking it with the rest of them down in hedonistic Hersonissos.

Crete is the cradle of European civilisation, but this cradle has been rocked a few times. Whilst it has fiercely held on to its own identity, vestiges of Roman, Venetian and Turkish rule are found across its diverse terrain. In the island’s north-east are the rubbly ruins of the 1579-built Venetian island settlement of Spinalonga. In the north-west, the charming old-town of Chania keeps amblers immersed in 13th-century architecture, and ochre- walled mansions dishing up multi-ethnic cuisine.

For a true taste of Crete’s authentic Minoan past, explore the world-famous archaeological sites of Phaestos or Knossos. Just south of Heraklion, Knossos is one of Crete’s most treasured sites. Around 3,500 years old, it was excavated in the early 1900s by British archaeologist Sir Ar thur Evans, who dedicated over three decades to his project. Roam the settlement (believed to have once contained around 1500 rooms) to see the processional corridor, an ancient gypsum-stone throne, a storeroom housing giant pithoi and The Royal Road (Europe’s oldest paved).

For couples with itchier feet, rural Crete’s sensory walks await. Hard-core hikers tackle the epic west- to-east-coast E4 Trans-European Footpath. But most tend to explore tracts of western Crete’s natural wonderland; the snow-capped White Mountains, sections of which soar up to 2,500 metres.The spirited couple take on the challenge of clambering along the stepping-stones of the lush Samaria Gorge.This 16 kilometre-long gorge trail begins from the Omalos Plateau and heads downhill to the Libyan Sea. Crete is on the bird migratory path between Africa and Europe from March to May, so eye the sky for the endangered lammergeier; a bearded vulture with a near three-metre wingspan.You’ll frequently hear the sound of jingling bells from domestic goats, but at the (now abandoned) village of Samaria, look out for the friendly, though also endangered, Cretan ibex; the island’s wild kri-kri goat.

At the trek’s main highlight, dubbed The Iron Gates, you can almost touch each side of the canyon’s 500 metre-high bisected cliffs.The walk takes around four to six hours, so be armed with a packed lunch and replenish your water bottle from the icy freshwater springs along the way.

Botanists should keep their eyes open in the mountains and gorges for the island’s endemic Cretan dittany, Cretan Ebony and white peony. Also prolific across the island are the intricate yellow bee orchid flower, mint, marjoram, thyme and rosemary.Autumn is equally divine, with olives, grapes, chestnuts and oranges all in season.