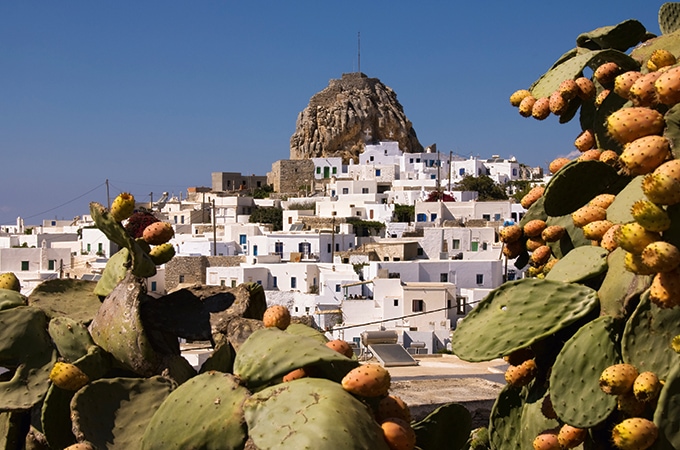 The clank of crockery carries through Katapola Bay as locals and stray cats awake. Fishermen dock and deliver their catch before the first ferry, carrying the culture-hungry, arrives. Unassuming, yet coyly handsome, Amorgos is the traditional Greek Island, embracing history, culture and arresting architecture.

This is stone wall country. Climbing above the bay up to Moundoulia Hill, you can relive the past by wandering around the bastions of the ancient excavated settlement of Minoa. Its 4th-century BC gymnasium is clearly recognisable, and by the Hellenistic temple stand the remains of a solitary statue. The only other life you are likely to encounter on your slate and limestone rocky rambles is a donkey, goat or a handful of cows.

It’s easy to dip into a sleepy afternoon at Chora, the island’s capital. Uniquely for Greek island-capitals it is hidden inland at the dizzying height of 400 metres above sea level, erected there to deter pirates. Crowning the town’s panoramic peak, and spied upon by ancient windmills, is the 13th-century Venetian Castle of Jeremiah Ghisi, seen as the island’s protector. Its Meltemi-buffeted ramparts behold magnificent views over the entire village and the east-to-west coasts. Similar in many ways to Mykonos’ town, Chora is a graceful melange of whitewashed sugar-cubed houses, but is far from the bustle of its snazzy designer neighbour.

Simplicity and serenity emanates from Amorgos’ 121 square kilometres, home for a population of just 1,850. After sunrise, walking inland along mule trails has you steeped in peace. Amid the pungent wild herbs and rare orchids, century-old farming equipment lays powerless in the baking sun. Picnicking on a lunch of fresh bread, feta, olives and tomatoes might be about the most energetic you’ll get on Amorgos. That is unless you have heard about its vertiginously-mounted architectural phenomenon.

Carved into the mountain, most literally, and only visible from the sea, the 10th-century Byzantine Monastery of Panagia Hozoviotissa is one of the Greek Islands’ most spiritual historic monuments. Stitched like 3-D embroidery onto the vertical eastern cliff-face of the Profitis Ilias Mountain, it hangs suspended at almost 300 metres above sea level, with precarious balconies sponging up the island’s east coast vistas. Standing here in complete tranquillity, time freezes around you.

Entering the dungeon-like stairway, ducking as you climb, you encounter miniature rooms that seem fit only for dolls’ houses.The few monks that remain here take care of the priceless Byzantine icons and handwritten manuscripts – the island’s treasures. And they are hospitable people, greeting you with a loukoumi; a local sweet similar to Turkish delight.Also offered is a fiery shot of psimeni raki, locally known as rakomelo; a grape-based liqueur made with local Amorgian honey, herbs and spices. It’s welcomely chased down by a glass of water!

If you are energetic enough to climb up to the monastery at sunrise, look out over the sparkling sea of crushed sapphires, and it’ll quickly become clear why the French film-maker, Luc Besson, chose these waters as the location for his cult movie, The Big Blue.