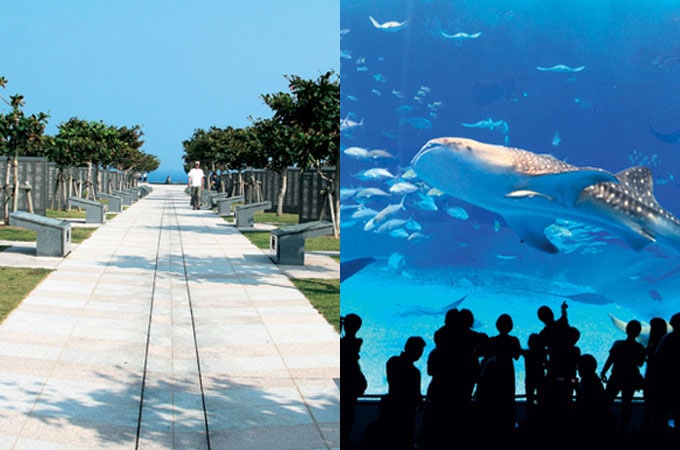 Okinawa is a cultural treasure trove just waiting to be discovered by intrepid couples ready for a different experience. Rhonda Bannister shares her top 5 things to see and do …

1. Immerse in the culture

The easiest way to experience and learn about the Okinawan culture is to visit those places that illustrate and exemplify its fascinating heritage.

Ryukyu Mura: A recreated, traditional village with exhibits and parades showcasing various festivals, crafts and foods. Old Ryukyuan homes were brought from all over the islands and painstakingly reassembled here in the village to preserve the heritage of the Ryukyu Kingdom. A wide range of performances are held at the village, including Eisa taiko drumming, dances, concerts, parades and re-enacted historical ceremonies.

Visitors can participate in hands on experiences such as learning how to play the local instruments and dances, craft pottery and paint Shisa dogs. Onna Village, Okinawa Honto, open daily 8.30 am – 6pm.

Tsuboya District & Pottery Museum: The history of Okinawan pottery stretches back over six centuries with the most famous style, Tsuboya-yaki still in production, having been passed down through generations. At the museum you will learn about the history and making of all the different forms of pottery and then when finished, take a step back in time with a walk through the cobblestoned Yachimun Alley area, home to more than 30 pottery shops, hidden pagodas and ancient kilns.

Get your free map of the area from the museum. Naha; open 10 am to 6 pm Tuesday to Sunday – closed Mondays.Urasoe Art Museum: This is where you’ll see amazing cultural treasures of elaborate and ornate lacquerware in the permanent and temporary exhibition rooms. In the 16th century exceptionally fine lacquerware pieces were produced in a special facility, the Kaizuri-bugyosho, under royal administration and included detailed carvings with gold inlay as well as exquisite pieces using cinnabar red lacquer with mother-of-pearl inlay.

This museum gives an insight to the cultural exchanges with neighbouring countries that affected the artistic development of Ryukyuan lacquerware. Take advantage of the free audio guide in English – it’s fascinating. Urasoe City, open 9.30 am to 5 pm, closed Mondays.

The most popular site in Okinawa is Shurijo Castle which was once the country’s most important building, home to the royal court and the cultural heart of the Ryukyu Kingdom. Destroyed in WW11 bombing raids in 1945, it has been carefully restored and offers a fascinating glimpse into the opulence of court life centuries ago. This is just one of the nine castle sites dating from the Ryukyu Kingdom era that are on the UNESCO World Heritage list with two others close by making it easy to see them all in a couple of hours.

Tamaudun Mausoleum is just down the hill from Shurijo Castle and was built in the 1500s by King Sho Shin as the royal mausoleum for the Ryukyu Kingdom; Shikinaen Royal Garden features lovely but simple wooden palace buildings set in landscaped gardens and Sonohyan Utaki Stone Gate was a place of worship for the King during the Ryukyu Kingdom era and is located along the road behind Shurijo Castle’s Shureimon Gate.

The other sites are Seifa Utaki, a number of caves and towering rock formations sheltering altars which are still visited by locals and considered the holy of holies to Okinawans; Nakijin Castle ruins sit atop a mountain offering a breathtaking view along with a step back into the past; Zakimi Castle ruins give the feeling of what living in an ancient village would have been like and the visitors’ centre doubles as a museum with a display of archaeological artefacts; Nakagusuku Castle is one of the best preserved castles in Okinawa being chosen in 2006 as one of the 100 famous Japanese Castles by the Japan Castle Foundation and Katsuren Castle – three levels of ruins requiring a good walk to get to the top but the reward is a magnificent view.

3. Get wet on, under and over the water

Divers and snorkellers flock to Okinawa to enjoy the incredible waters but even if you’re a novice, there’s plenty of in and underwater activities to tackle. Take your first dive in the popular Blue Cave in the southern part of Onna Village with a local dive expert.

There’s no shortage of beautiful beaches and plenty of other thrilling waterborne experiences such as jet boat rides, parasailing, wind-surfing, kayaking, surfing, fishing and sailing. Take a day trip to one of the nearby islands and discover another world of peace and tranquillity.

Take a walk on the seabed with an oxygen-supplied helmet or snorkel with an amazing variety of fish on uninhabited Nagannu Island. Do a dive class for beginners on Minna Island or watch the unhurried marine life beneath you with a paddle on a see-through kayak. Both of these islands are very close to Naha and provide a day out on the water with a difference.

There are plenty of attractions and sights to keep you busy for a week, but if time is limited, here are the two most popular. Take a scenic drive to Ocean Expo Park in the north of the island.

There are three areas in the park: Okinawa Churaumi Aquarium, Tropical Dream Centre and Native Okinawan Village. The Aquarium, reputedly the best in Japan and one of the largest in the world, will amaze you with its massive tanks full of enormous sharks including the whale shark and manta rays. Be prepared to spend an entire day as it’s fantastic!

The main memorial to the Battle of Okinawa is the Peace Memorial Park located in Mabuni, Itoman City, the Peace Museum and Cornerstone of Peace which is built upon the site where the battle took place and where the names of all those who died in the fighting are inscribed. This park is a tribute to the hundreds of thousands who died in the ‘typhoon of steel’.

5. Visit the other islands

Kume Island – Step back in time: Just a 25-minute flight from Naha, the island of Kume preserves the ‘old and good Okinawa’, with traditional residences, some built over a century ago, dotted around the island. Join in one or more of the unique island experiences to immerse yourself in the island’s nature and culture with locals as your guides. There’s plenty to see and do on this lovely island.

Kerama Islands – Untouched peaceful paradise: Easily accessed by sea or air, the Kerama Islands offer some of the world’s best snorkelling where a myriad of tropical reef fish can be seen. The ocean is extremely calm which makes it easy for any level of swimmer. Only four of the Kerama’s 22 islands are inhabited: Aka, Geruma, Tokashiki and Zamami, a series of lush green hills and unspoiled beaches providing excellent conditions for outdoor activities such as hiking, windsurfing and fishing.

Yaeyama Islands Lonely Planet listed Iriomote, Taketomi and Ishigaki islands as some of the world’s best secret islands and it’s no wonder as they are about as off the beaten track of Japan as you can get!

Ishigaki has the best of the beaches and its diving spots are world famous. Here you can take part in the ‘Slow Food Program’ where you can learn about the healthy food of the island by actually trying to farm, fish and cook; indulge in fishing expeditions aboard a traditional Sabani fishing boat with a local fisherman and try harvesting in the Goya fields before being taught to make numerous Okinawan dishes known as Chojyu Shoku – food that is the secret to longevity.

Tiny Taketomi, a 10-minute ferry ride away is famous for its sparkling, white sand, traditional, red-roofed Ryukyuan houses, laid-back atmosphere and transportation by buffalo cart. Here you can learn about the history and culture from a local guide as you partake in a barefoot walk around the island, visiting various sacred places and stopping to chat with the elders as they sit on their porches.Iriomote, Okinawa’s second largest island is a jungle playground and Japan’s wildest island – perfect for adventure seekers with its waterfalls, indigenous plant species and wonderful ecosystem and its wildlife, such as the Iriomote cat – a new species of wild cat discovered recently although it has lived here for more than three million years!

This is the place to get in touch with mother nature – paddle a canoe along the river past magnificent mangrove and sub tropical forests, or take a bath in Japan’s southernmost hot spring. Boats connect all the islands and there are regular flights from Naha to Ishigaki.