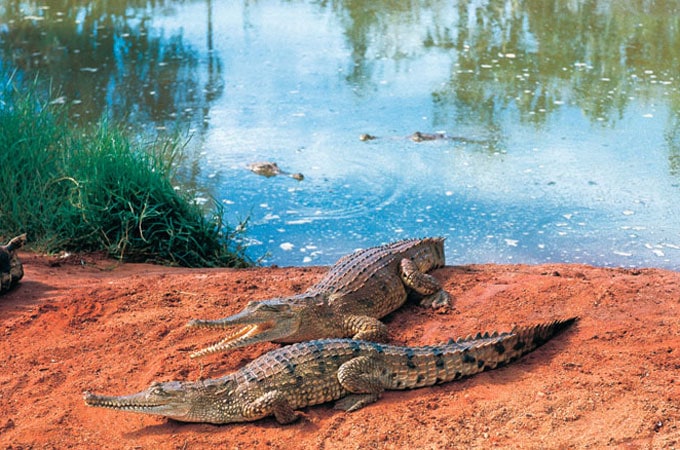 It’s hard to imagine there’s the same amount of air in the Kimberley. Somehow the space between the earth and the heavens seems bigger; except at night, when the beaming stars seem so close you might just reach out and touch them.

They call the Kimberley the place of dreams, because it’s where the dreamtime began. The Kimberley is the region original Australians first came to 41,000 years ago and their long, rich culture lends a sense of splendid isolation few places on earth can boast. Today a third of the Kimberley’s inhabitants are of Aboriginal descent.

It’s an area three times the size of England (at 423 000 square kilometres) but with fewer than 40,000 inhabitants. There are fewer people per square kilometre here than almost any other place on this earth, only three towns in the entire area have populations of over 2000 people.

And the Kimberley is not a desert; it is far from it. It’s the home of ancient sheer-sided mountain ranges with breathtaking gorges, waterfalls, lakes, fast-flowing rivers… even beaches (some of Australia’s finest, in fact). In fact there’s so much steep landscape that the Kimberley is impossible to traverse from back to front. There are parts of it that have still never been seen by anyone – it is one of the remotest, wildest regions left on Earth.

For all its harshness – it is, after all, a place of dry, red earth and chocolate-brown rivers where saltwater crocs rule – the Kimberley exudes a gentleness that charms visitors. It is for this reason couples should visit – sure, feeling isolated invokes a certain sense of romance, but let’s not forget the Kimberley’s more subtle romantic charm — like the way the colours change on its limestone and sandstone mountain ranges in the minutes before and after its short, sudden, spectacular sunsets, or the noise of a waterfall as it thunders down onto worn sandstone boulders in a gorge in the middle of nowhere.

There are many pursuits for couples here, or there is nothing at all. There’s nothing quite like the Kimberley, for time stands still here; ancient places tend to make a mockery of our trivial time constraints. There are 4WD tours, fishing for the all-elusive barramundi, scenic helicopter rides or visits to remote Aboriginal communities and tiny, out-of-the-way country towns. Or you can charter small planes for unique tours of the place, to famous landmarks like the Bungle Bungles (a maze of orange and black striped beehive shaped domes in the 240,000 hectare Purnululu National Park) or Windjana Gorge.

There are places here rarely visited by anyone, and then there are the well-trodden spots like Broome that buzz with a multicultural energy, fuelled by a century and a half of employees of the pearling business. Couples can also take horse-riding tours along historic cattle droving trails. Home Valley Station (not far from Kununurra in the Kimberley’s eastern reaches) offers multiple-day riding tours near the Gibb River Road, a 660-kilometre dirt track that dissects the Kimberley from Derby to Wyndham. Cattle musterers have been running cattle here for 150 years, and you can follow their trails, sleeping in swags around campfires at night, if you can, that is, under the world’s brightest starry skies.

It’s hard to get around – exploring the Kimberley requires spine-rattling journeys across bumpy, dirt tracks or light plane flights – but that’s what keeps it unique.The Kimberley can never be conquered; its isolation and its ruggedness keeps it free from major development. And so the rewards feel all the richer, and all the more romantic, when you discover them for yourselves (you will never share a single moment with a coach tour of package holiday-makers).

Where to Stay: Accessible only by air or water, the new Berkeley River Lodge offers ready access to the joys of the outback, including beach strolls, guided hikes, sea turtle viewing, cruising and exploring the nearby gorges, and barra fishing, without skimping on creature comforts. The sensitively- designed, superbly-positioned ocean view villas are gorgeous, with open-air bathrooms perfect for stargazing. If you yearn for wide open spaces and a taste of Australia’s unique wilderness, this could be the place for you. This spectacular property is offering H4C readers a special Stay 4, Pay 3 night deal.