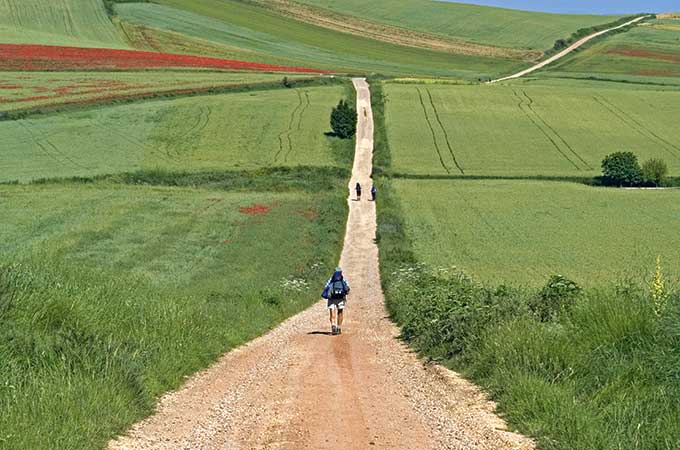 “Why am I doing this?” My body ached. I felt exhausted. Every hill conquered would promise respite from this merciless climb – then, before we knew it, we would spot yet another. We had left Saint-Jean-Pied-de-Port in the dark of 6:30am with just head torches to light our way. Dawn broke, and we could see a stream of people at different points above and below us, different sizes, ages, and nationalities. Some striding, some plodding, all following the yellow arrows and scallop-shell signs, and all with a common purpose – to complete the Camino de Santiago Frances, an ancient pilgrim route which commences in the French Pyrenees and continues for approximately 800 kilometres across northern Spain.

I had some doubts that I (aged 67), and my husband Trevor (recently turned 70) were up to this challenge. However, it was something we had dreamed of after observing pilgrims on the Camino during an earlier trip to Spain. Neither of us is Catholic, but something about this venture strongly resonated within.

The first few days we walked through rolling emeraldgreen hills, with towering dark beech forests providing welcome shade from the relentless heat and the sun. Some of this was uphill – after the first day, more was down. Sparkling crystal streams tumbled and frothed. Wildflowers luxuriated – purple heather, golden gorse, pink crocus. We gazed into quaint villages and abundant vegetable and flower gardens, watching cows and horses quietly graze in lush fields.

We walked approximately 25 kilometres a day, commencing at 7am and usually arriving at our accommodation around 2pm. The last two to three kilometres each day felt like 10. Accommodation was varied: a posada, an ancient pilgrim hostel beautifully restored; a bed and breakfast with welcoming and kind owners; a modern, characterless hotel. On the Camino, traditional accommodation was in albergues, or hostels, usually dormitories and very cheap. The food choice often was pilgrim’s menus, where all pilgrims are fed together in a restaurant and provided with three robust courses plus wine for about EU 10-12.

Despite all, there is nowhere else I would have rather been. We read a sign that said that nothing amazing can truly be experienced without pain, and were starting to agree with this. We walked into Pamplona, where the crowded streets contrasted with the quietness of the countryside. The Camino doubles up over a short distance with the route of the famous Running of the Bulls. That night we abandoned pilgrim’s menus for a Michelin-rated tapas bar. Little luxuries are important! The following night, we delighted in watching men, women and children dressed in red and white, feasting and dancing. Despite aching bodies, we managed a few twirls ourselves. We crept out early next morning, past inert bodies, some of which grunted “Buon Camino” in farewell.

We left the Navarre region and moved into La Rioja, famous for its wines. We were walking in September, European autumn, with massive golden haystacks and brown ploughed fields – trees vibrant in reds, oranges and yellows, sunflower fields changing from golden to brown. We plucked juicy grapes, figs and blackberries. We refilled our water bottles regularly at ancient water fountains. We were surprised by one fountain that supplied red wine, a gift for pilgrims from local winemakers!

As we continued, towns became smaller. Every day we joined pilgrims from around the world in our walking and relaxing. Afternoons became socialising time over a glass of beer, sangria or wine, comparing our days. We visited amazing ancient churches, some opulent and excessive, others simple with a strong sense of spirituality. The Camino took us past every church, always at the top of a hill, so we certainly saw a few.

Countryside led to a city; this time, beautiful Burgos where we stayed in a central hotel and visited the amazing cathedral there. After days of pilgrim’s menus, caramelised goat’s cheese salad, asparagus in foie gras sauce, and a tapas crawl were superb. We continued on into Castile y Leon, region of endless skies and ploughed fields. Instead of clambering up and down hills, the pathways were wide and easy to walk along. Our bodies were becoming accustomed to their punishment and protested less; however, the Camino continued to be demanding, and I now had my backpack transported every day for the sum of EU 5 thanks to a pinched nerve. The wine quality deteriorated after Rioja. It didn’t deter our German friend, though – he had the capacity to drink four bottles of wine a day, walk for hours and always be in high spirits!

Related article: Discover 5 awesome adventure holidays you can share with the one you love.

We continued to leave early watching the sun rise to a chorus of crowing roosters. It was a crowd of the walking wounded – knees playing up, backs complaining, blisters stinging – and the talkers (were they really going to talk for 800 kilometres?). We met a German man walking the Camino with his dog who carried his supplies in little red panniers on his back, though we would usually find ourselves on our own except for the lean, fit and young racing by.

We met up with some pilgrim friends in Leon which is alive with medieval stalls, massive cauldrons of paella and meats, trays of sweets, music and belly dancing. As we continued our journey, we’d often find ourselves confused about what town we were in – twenty-one nights of different towns and different beds will do that!

Rabanal del Camino was our host town for one night, where we met with a pilgrim friend to attend evening vespers at a tiny church. The warm, cosy church was overflowing with pilgrims, the sounds of Gregorian chants echoing around. Next morning we climbed to the top of a mountain, 1515 metres high. I piled on all the clothes I had – hot was now very cold! At the top of the mountain is the Cruz de Ferro, an iron cross which is an abiding symbol of the Camino. Here people pause, reconnect with the journey, and add a symbolic stone to a great pile. Trevor and I had brought a significant stone from Australia in preparation for this emotional moment, and we noticed people around us were also teary-eyed and reflective. Walking on through swirls of mist, I contemplated the hills, pink heather, sounds of birdsong, cow and goat bells, tucking memories away for later.

Finally, we left the Castile/Leon region to start on the final leg of our journey. Magical Galicia stretched before us – an enchanting region of rains, mists and green rolling hills, mountain streams and hobgoblins, and a new dialect with which to contend. Below, swirls of clouds swathed tiny villages, like giant cobwebs holding crumbling ancient buildings together.

Our first night we ate in a typical Galician round stone building with a straw roof and a giant fire to keep it cosy. Seated around a massive table was around 100 pilgrims for a very average sort of meal. But it was the people there that made it special – whether French, Dutch, Danish, Canadian, Korean or Indian, we had wonderful conversations about their lives and countries.

We arrived in Sarria, the last town where pilgrims could leave for Santiago and still get their Compostela Certificate. So the town was crowded with clean walkers, visions in their spotless designer walking gear, newly blow-dried hair, makeup and whole looking bodies. Gone were the strappings, knee bandages or blister aids. Did I really look like that a month ago? Those of us with 700 kilometres under the belt boasted scruffy hair and filthy shoes, easily spotted by our limping gait and dereliction.

By this stage, we loved/hated the Camino depending on our aches and pains. Morning was usually, “I never want this to finish,” but later, as we limped into accommodation brushing off flies, we wondered, “Is it really still four more days?”. But we felt a real determination – enter Santiago we would!

The last four days the rain poured down. The Camino changed from a pathway into a creek, with water pelting down and red-spotted toadstools sprouting up around us. Our waterproof clothing failed, and we were soaked to the very skin. One morning the wind joined the downpour to bucket down horizontally, and we were literally blown into a bar. And not just any bar – a graffiti bar, with art across the walls, tables, windows, even toilets. Sitting down with a cup of coffee, I saw scrawled on the table in front of me ‘Imagine all the people, sharing all the world’, from John Lennon’s Imagine. I contemplated how over these four weeks this was how I had seen strangers treat us and each other. Just imagine if we all took some of this home with us!

Life was a series of meeting and re-meeting pilgrims. On the second to last day when we walked into a bar for breakfast, we found a Canadian friend we had met earlier. She said in a loud voice, “I am over this Camino! If any of my friends ask me to come back and do it with them, I will say no way – you can bloody do it on your own!” There was a hushed silence. Eventually, one English lady said, “I won’t miss trying to pack my bag in the dark every morning!” Laughter erupted. The intensity of the journey had broken.

On our last day, we again left in the dark, climbing yet another hill. Puddles had grown to lake size overnight. We rounded a corner, and there it was in the distance, Santiago de Compostela, lights shimmering, visible through sheets of rain. I felt sorrowful – the end was nigh. After walking through the rain, mud and dreary suburbs for two and half more hours my sadness evaporated somewhat! We trudged straight to the beautiful cathedral and watched the crowds milling around. Our journey ended; our goal achieved!

We watched other pilgrims enter the old town, some silent, some whooping and screaming, hugging, tears, joy. The city tolerates this influx of pilgrims generously. A spirit of goodwill permeates the city, and it was a good place to be. We slept each morning until late, waking only to wander around the unique city, meet up with pilgrim friends and say farewells. It was the official end of our Camino, but it will endure in our hearts forever.