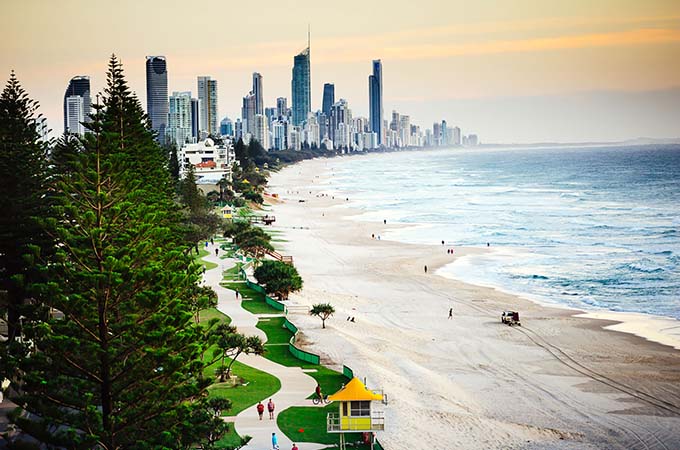 Local Craig Tansley reveals why the Gold Coast has become one of the most romantic hang-outs in Australia and shares his tips on where to eat and drink and what to do and see.

It’s seven o’clock and the last surfers of the day are paddling past us in the dark. The waves they’ve been riding at Burleigh Point are washing in around the tables here at the Gold Coast’s most lauded dining establishment, Rick Shores. The tide peaks at 7.11pm; if we can get through the next 20 minutes, our shoes should stay dry. The maître d’ says they’re ready for anything; guests can move to a higher table if they’re squeamish. Though none of the couples seated along the sea’s edge look the least bit concerned. They’re distracted by the Moreton Bay bug rolls, the spiced mackerel with white radish kimchi, and the gentle glow of the three-quarter moon rising fast over the ocean.

The Gold Coast has undergone a bohemian kind of metamorphosis these past few years. There’s an effortlessly casual chic about the place (and Burleigh’s at the centre of it) that feels more than a little Melbourne-esque. Here at Rick Shores we sit at a bar as couples take, their places between potted birds of paradise and under an art-deco chandelier. Just across the road from us at The Fish House, couples sit beside white timber louvre windows folded back to welcome in the breeze. In the town itself – past the lorikeets shrieking in the pine trees of a sprawling beachside park – tiny laneways lead to new cafes, bars and restaurants you have to know about to find. Like Iku Yakitori (just try spotting its entrance) where, when we finally get in through a small wooden doorway off a back lane beside two speakeasy-style bars, we’re transported to a moody bar/restaurant where Japanese chefs cook over hot charcoal.

All the look-at-me excess the Gold Coast was famous for has receded now… or at the very least, it’s confined to Surfers Paradise. There’s a subtlety about the region that’s one part boho, and one part romantic isolation (among the high-rises). In suburbs including Nobby Beach, Mermaid Beach and Miami couples spend evenings in the sorts of places (like game-changing Gold Coast dining institution Hellenika) where dining’s just as much about being there as anything that’s on the menu.

I moved back to the Gold Coast last year after 20 years away, and I don’t recognise the place. For all its natural beauty (52 kilometres of beaches, and a hinterland spread around the rim of an extinct volcano – the southern hemisphere’s largest) there was always something a little vacuous about the region. But now the coast offers more for couples than just a lot of sand and water.

I’m surprised so many visitors still think the Gold Coast’s all about Surfers Paradise, Broadbeach… and Coolangatta. That’s to miss the point of being here entirely; for it’s the Gold Coast’s hidden secrets that make this region special, and romantic. If you find others on the beach here, keep on driving. Take an early morning walk through the 27-hectare national park on Burleigh Headland and you’ll find secluded beaches along Tallebudgera Creek where few venture. Only seven minutes drive south, hire a stand-up paddleboard on a creek (Currumbin) which winds its way from the sea for 24 kilometres into the hinterland. We like, to paddle past cafes set beside sprawling fig trees by the bank (look out for The Boatshed) to where the creek meets the ocean. Here the water’s as blue as a Polynesian lagoon. We live just above this entrance: some mornings dolphins venture in to fish. Or if you’re here between July and October, paddle a little further out and you’ll see the humpbacks passing by close to shore. If you prefer long open beaches with no one on them, there’s never a soul on the seven-kilometre stretch between Currumbin and Kirra. Or the five-kilometre stretch north to Tallebudgera Creek and Burleigh Heads.

For all its charm, Currumbin’s still the Gold Coast’s best-kept secret. While hundreds congregate on the beach at iconic surf spot The Alley, few go beyond. A kilometre inland, there’s a newly emerging arts precinct set in an industrial estate (Currumbin Waters).

Check out the best local artists and musicians at funky gallery/cafes such as Dust Temple. The Gold Coast is making a habit of converting its industrial spaces into cultural hot-spots – especially in suburbs like Miami where, wedged between mechanic workshops, craft brewing companies (Lost Palms Brewery), vegan eateries (The LC and Greenhouse Canteen) and The Miami Marketta have changed the social scene for visitors. Three nights a week, the best live acts on the coast converge on a huge converted warehouse (at the Marketta) to play while visitors choose from a buffet of food trucks offering cuisine from around the world. Beside us here, artists, antique furniture dealers, designers and potters trade their wares.

But keep driving west from Currumbin Waters to the Currumbin Valley, Queensland’s best hideaway location (pssst, don’t tell anyone). When we can drag ourselves from the beach, we only need drive 15 minutes to where the mountains rise along the rim of the extinct Tweed Volcano. The hinterland this volcano created when it erupted 22 million years ago is as significant to the Gold Coast as its beaches. Out here you’ll find the largest tracts of subtropical rainforest left in Australia in World Heritage-listed national parks – also home to some of Australia’s most romantic retreats. Couples needn’t venture beyond Currumbin’s lush hinterland for entertainment. We spend entire weekends swimming in natural rock pools by the roadside, or within the Mount Cougal section of the Springbrook National Park (at the Valley’s end), and eating at organic fruit stalls and farms with their cosy cafes and musicians playing favourite old tunes, perched out along the escarpments (try Freemans Organic Farm, Currumbin Valley Harvest and the Currumbin Valley Eco Village).

TOP TIP: Avoid school holidays. The Gold Coast is popular with families so accommodation is limited and often doubles in price during these peak times.

The months of autumn and spring are best, though temperatures rarely drop below 20 degrees even in winter (neither does the water temperature).

Jetstar, Virgin Australia and Qantas all fly daily to the Gold Coast from Sydney and Melbourne. All major hire car companies operate from the airport.

Find your dream romantic getaway with this handpicked library of beautiful accommodation.