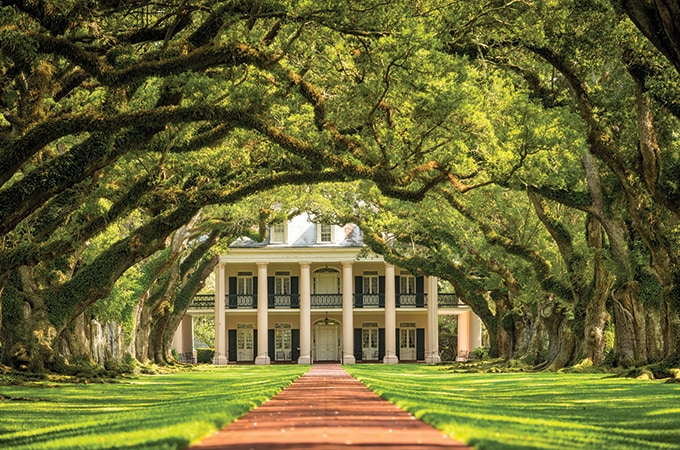 Alligators like marshmallows, who knew? We learn this during a swamp tour with Cajun Encounters on Honey Swamp, not far out of New Orleans, Louisiana. The tangle of vegetation, wizened branches of the tupelo trees, birdlife, fishing shacks with motley docks… not to forget the alligators, all add up to a photographer’s dream.

The ’gators are naturally curious, sliding off the banks to check us out. Others are only tempted by the sweet scent of marshmallows, tossed into the water by the tour guide and skipper. Some are so keen for these sugary treats that they rise out of the water centimetres away from the boat, demonstrating their white, scaly bellies and large teeth.

The swamp tours are just one of a myriad of activities that can be done in and around New Orleans, with a week needed to even scratch the surface. The French Quarter, or Vieux Carré, is the heart, a 13-block square that was the city back in 1721, established after the French came up the Mississippi in search of a good spot to set up a trading post.

Moving to the beat

These days, the French Quarter is awash with history, art, bars and balconies, and our cameras click away with gay abandon as we stroll down the gas lamp-lit streets that we’ve heard so much about. Royal Street is overwhelming with galleries full of vibrant art, antique shops, restaurants with intricate courtyards and bars. We love the art in the Angela King Gallery and Caliche and Pao, only wishing we had enough money to purchase a piece or two. Caliche’s dynamic works showcasing the French Quarter with dancing gas lamp posts are superb.

Music spills out of doorways and windows, and musicians play on street corners or even on the road. We watch a young man plucking and picking away on a faded, stained banjo and then come upon two ladies, one playing a fiddle and the other a guitar, both of them lolling back on lounge chairs as if they were at home. A local tells us reverently that we are in the presence of Tanya and Dorise – well-known musicians who are in demand at big events. We even spot a flag-waving wedding group accompanied down the centre of the street by a brass band. These bands, also known as the ‘second line’, play for weddings and funerals.

Music is part of the DNA in these streets, where Louis Armstrong and Jelly Roll Morton honed their craft. For every single musician playing to no one and everyone on these historic streets, there are dozens more inside. Pub bands play on special stages behind the bar of party establishments like the Tropical Isle Original, where you can apparently get the most powerful drink in the city – the Hand Grenade. This place, like much of Bourbon Street, is best avoided (it’s a bit like Gold Coast schoolies on steroids). But there are some fabulous jazz clubs to be found amongst the throng, including the legendary Preservation Hall, Fritzel’s European Jazz Pub and Irvin Mayfield’s Jazz Playhouse. We heed advice from several locals and venture to Frenchmen Street instead, with its more casual vibe and great bands pumping out stirring jazz at clubs like the Spotted Cat, Snug Harbor and Apple Barrel.

A nod to the past

The dark past of slavery is not pushed under the carpet, with many companies running tours to the antebellum plantation houses along the Great River Road. We visitLaura Plantation, and are drawn into what life must have been like for the families that lived in the house, and for the slaves, ripped from their lives back in Africa to work these plantations. We also visitOak Alley, which is known for its 28 ancient oak trees lining a driveway (best viewed from the upstairs verandah). The property is beautiful, the history fascinating and we sample the drink that many of the ladies of the manor would have drunk – a mint julep.

Closer to town we ride the St Charles Avenue streetcar (don’t call them trams) out to the Garden District, which was where the Americans set up residences after Napoleon sold Louisiana to Thomas Jefferson for a cool US$15million back in 1803. The French inhabitants of the city refused to do business with these interlopers, living on one side of Canal Street while the Americans settled in on the other, with the two sides fighting for 30 years. Even today, the central strip of the wide, beautiful Canal Street is known not as a median strip, but as a ‘neutral zone’. The ride on the heritage-listed streetcar takes us past street after street of spectacular mansions, past the Audobon Zoo, pretty parks, statues and the Lafayette Cemetery Number 1.

The most-visited cemetery (only accessible on an organised tour) is the St Louis Cemetery Number 1. Look for the grave of the mother of voodoo, Marie Laveau. Voodoo tours and ghost tours are also popular around the city, but we weren’t brave enough for those.

Jackson Square is a must with its street artists, horse-drawn carriages, the beautiful St. Louis Cathedral and the Café du Monde, where tourists line up to inhale a beignet – fried dough sitting atop a truckload of icing sugar. Stroll the Riverwalk, take a ride on one of the paddle steamers that ply the brown waters of the Mississippi, so many stories from the past ebbing with the current, and pay your respects at Congo Square in Louis Armstrong Park, where African slaves started playing music together on a Sunday morning on what was their only day off.

One of the highlights of a visit to New Orleans is the food. There are so many restaurants to choose from, and not all serving grits and gumbo, jambalaya and crawfish. We go into a food coma at the legendary Antoine’s, which has been in the same family – now fifth generation – since it was opened by the 18-year-old Antoine Alciatore back in 1840. The history is tangible, with many of its 14 rooms boasting photos of just about every celebrity known to mankind.

Compere Lapin at the Old No. 77 Hotel is wonderful for lunch or dinner, with delicious modern cuisine prepared by chef Nina Compton, while Cochon Butcher and The Courtyard of Two Sisters are also popular choices.

But you can’t visit New Orleans (aka the Big Easy or the Crescent City) without having a meal at Brennan’s. It turned 70 this year and is definitely worth a visit for its famous Bananas Foster dessert. Much like the city itself, it’s rich, lavish and leaves you wanting more.

There is no escaping this dish when you visit New Orleans. Here’s the original Brennan’s Bananas Foster recipe…

1. Combine butter, sugar and cinnamon in a flambé pan.
2. As the butter melts under medium heat, add the banana liqueur and stir to combine.
3. As the sauce starts to cook, peel and add banana to the pan. 4. Cook the banana until it begins to soften (about 1-2 minutes)
5. Tilt back the pan to slightly heat the far edge. Once hot, carefully add the rum and tilt the pan toward the flame, to ignite the rum.
6. Stir the sauce to ensure that all of the alcohol cooks out.
7. Serve cooked banana over ice cream and top with the sauce.