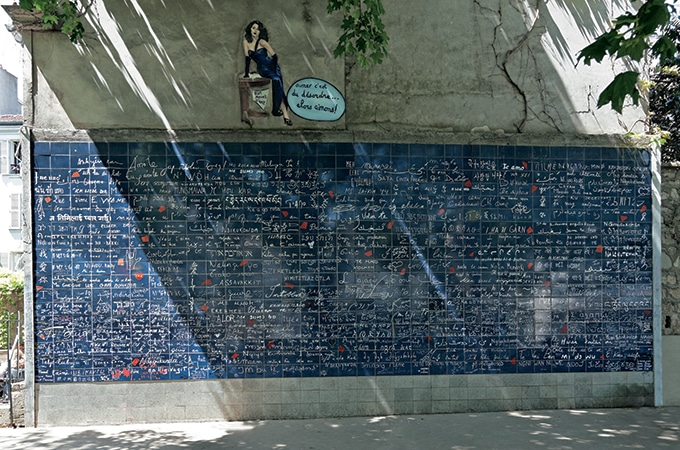 Forget the usual cliches (as gorgeous as they are), and check out some lesser-known romantic spots in the City of Light.

Paris is a city that instantly conjures images of romance: the sparkling Eiffel Tower, bridges across the River Seine and views from the rooftops. But according to the dictionary, romance is: “A quality or feeling of mystery, excitement and remoteness from everyday life.” While it can be difficult to feel remote in Paris (as it’s officially the world’s most-visited city, with more than 30 million visitors every year), luckily there are still places that aren’t on absolutely every visitor’s itinerary. Places that are full of mystery, history and – of course – romance.Here are some inside tips on where to experience romance away from the madding crowds.

The Rodin Museum (Musée Rodin) is easily one of the nicest museums in Paris. Rodin’s former residence – which reopened in late 2015 after a three-year restoration – is a beautiful, classical mansion. It’s situated in a park dotted with his sculptures, and features views of the golden dome of Les Invalides, Napoleon’s tomb and the Eiffel Tower. There’s a garden cafe selling decent croissants and very good macarons – which alone are worth the visit. But take a stroll through the gardens and you’ll also see the well-known sculpture, “The Thinker” contemplating life. Inside the exhibition area there is again, finally, “The Kiss”. The 1889 marble sculpture depicts the first kiss of lovers Paolo and Francesca (from Dante’s Divine Comedy), who were slain by Francesca’s husband and condemned to wander through hell for evermore. It’s love, lust and romance (and, um, murder), all in one.

Next to lovely Parc Monceau, full of follies and even a pair of turtles in the duck pond, is the perfectly preservedMusée Nissim de Camondo, the private mansion of a banking family who lived there in the early 1900s. Moïse de Camondo had the villa built to house his collections, and a collector he certainly was. From paintings and furniture to decorative items and china, Moïse had it all. But the rich Jewish family was destined for tragedy, with the heir Nissim dying in World War I, and the daughter and her family eventually dying in Nazi camps during World War II. None of the Camodo family survived, and the house was preserved in its original condition byLes Arts Décoratifs foundation. It’s an amazing and touching insight into how this family lived in early 1900s Paris.

The Museum of Romantic Life (Musée de la Vie Romantique), at the foot of Montmartre hill in the 9th arrondissement, is a hidden gem amongst Paris’s museums. It’s not actually about romantic life as the name may suggest, but rather the artistic era of the Romantics. Nevertheless, it’s a rather romantic place. Once the home of artist Ary Scheffer, over the years it’s been the meeting place of composers, artists and authors, including George Sand, Chopin, Delacroix, Franz Liszt, Charles Dickens and Ivan Turgenev. Accessed through a tiny, tree-lined alley tucked away from the streets, the building stands in a courtyard overgrown with flowers.There’s a shaggy little garden with a small cafe, giving you the opportunity to sit quietly in this hidden oasis in the middle of Paris. Inside, the home has been left in pretty much its original state, full of paintings and art, plus an extensive collection about the life of female novelist George Sand. It includes locks of her hair and a plaster cast of her arm, as well as Chopin’s hand, the more sensuous body parts reminiscent of their artistic work.

In the tiny Square Jehan Rictus, just across from the lovely metro stop Abbesses on Montmartre, is Le mur des je t’aime – a black, 40-square-metre wall made from enamelled lava tiles with the words “I love you” covering it more than 300 times, in 250 languages. It’s a pilgrimage place for lovers wanting to enjoy the small park in historic surroundings, who look for “I love you” in their language. From there you can take the shady, steep steps up to the artists’ quarter, but it’s only a mere saunter to the funicular train up to Sacré Coeur.

Away from the crowds, the Buttes-Chaumont Park (Parc des Buttes-Chaumont) is probably the prettiest park in Paris. Playground of Proust’s Albertine, who took excursions to this park earlier last century, it’s a
lot more accessible from Paris today than it was then. But otherwise it is unchanged.A famous feature is the Temple of Sibilla (Temple de la Sibylle), a miniature version of an Italian temple that sits atop a steep cliff overlooking Paris, with great views across to Sacré Coeur.The suspension bridge leading to the temple was designed by Gustave Eiffel and stretches across a lake that’s surrounded by grottos and waterfalls, undulating hills that invite picnics, and even views into the Petite Ceinture, an abandoned railway line that is now an overgrown wonderland. Within the park is also one of Paris’s best-loved restaurants and bars, Rosa Bonheur.

South of the Ile de la Cité, next to the famous Shakespeare and Company bookstore and alongside the path trodden by pretty much every visitor to Paris, lies Square René Viviani-Montebello – though this tiny park is often overlooked. Enter through the gate and you’ll find the church of Saint-Julien-le-Pauvre, one of the oldest religious buildings in Paris. It dates back to the 1200s, around the same time as the imposing Notre Dame, just across the river. You’ll also find the oldest tree in Paris here. Given the amount of parks and trees in the city, you’d be forgiven for thinking there’d be plenty of ancient trees – but you’d be wrong. This tree, propped up by an unsightly concrete crutch, was planted in 1601, making it well over 400 years old. Despite the distant chatter of visitors and chugging of tour buses, the tree stands among tiny alleys and crooked buildings, allowing an impression of ancient Paris: the crooked and cobbled Medieval Paris that existed long before Georges-Eugène Haussmann created the grand Paris that’s foremost in everyone’s minds these days.

Water and dreams is what you get when you stroll towards the Parc de la Villette along the Quai de l’Oise, an extension of the ever-popular Canal Saint Martin. You’ll see one houseboat moored after another: some contain restaurants and some bars, but L’eau et les Rêves is a bookstore, or bookship. The belly of the boat has been transformed into a bookstore specialising in travel, anything to do with water, coffee-table books of art and photography, and a fantastic selection of kids’ books. L’eau et les Rêves hosts exhibitions, author readings and theatre workshops, all on the water. At the weekend there’s also a great market next to the mooring, and there’s hardly a better way to spend a morning in Paris than to shop, eat, have coffee and watch the world go by alongside a bustling canal.

Butte-aux-Cailles (“hill of quails”) is a village in Paris, dating back to the 13th century. To call it a hill might be pushing it, as its elevation is around 62 metres, but the meandering little lanes, town hall, markets, and plentiful cafes and restaurants invite a stroll and further exploration. What makes Butte-aux-Cailles even more special is the street art. Whereas all across Paris you might see Space Invaders (made from ceramic tiles and found in cities all around the world) or other small plaques of art, here the artists have taken over entire walls, lanes and house fronts to create some stunning murals next to smaller pieces of art.

Maison Souquet: Don’t be fooled by the bland exterior of this gorgeous hotel. Although the front door is decorated with only a couple of small red lamps, the interior defines opulence and romance. The lobby is reminiscent of the palace in the movie 1001 Arabian Nights, while the cocoon-like rooms are named after courtesans and are covered in silk wallpaper individually handmade for each room. There are secluded corners in which to drink cocktails as you leaf through large coffee-table books, and a spa that can be booked for just the two of you.

Hotel Récamier Paris: On the Left Bank, in a corner of Place Saint Sulpice, right by the famous church, hides this tiny boutique hotel. A mere 22 rooms are connected by an amazing staircase and on each floor there’s a bust of the hotel’s namesake, the famous beauty and society salonist of the early 1900s, Juliette Recamiér, as interpreted by various artists. There’s a snug library full of coffee-table books and tiny places in which to sit and relax. This little jewel is situated right in the centre of all the shops, restaurants and action of the arty Left Bank, and is a hop and a skip from the Luxembourg Gardens (Jardin du Luxembourg).

Le Bistrot des Dames: Voted by Time Out as one of the 100 best bars in Paris, this is a quirky, secluded place to eat and drink in the up-and-coming Batignolles area of the 17th arrondissement. The traditional interior features eclectic retro decor, a bar that gives a hint as to the extensive wine list, a hidden away subterranean room, plus a lovely rear courtyard. They make Le Bistrot des Dames a perfect place for lunch, dinner and drinks – or all three in a row, if you get stuck chatting and enjoying the surroundings. The daily specials are superb, including great salads and a tuna main course that’s listed as “undercooked” tuna, which might sound dodgy, but is fantastic.

Chez Julien: This former boulangerie features 1900s-style decor full of painted tiles, mirrors, chandeliers and little architectural details. Situated at the foot of the lovely Saint Gervais church between the Seine and the Marais, you can sit outside on the cobbled little street that meanders past the church. Old local regulars mix with trendy young clientele, allowing for a great blend of old and modern style. The menu is a combination of French and Spanish, with a few surprises thrown in. It changes seasonally, but always includes fish and a daily dish, and a great drinks list. It’s a place to linger, enjoy the food and people-watch on a balmy spring or summer’s evening.

Travel to Paris from the UK and Europe with Rail Europe.