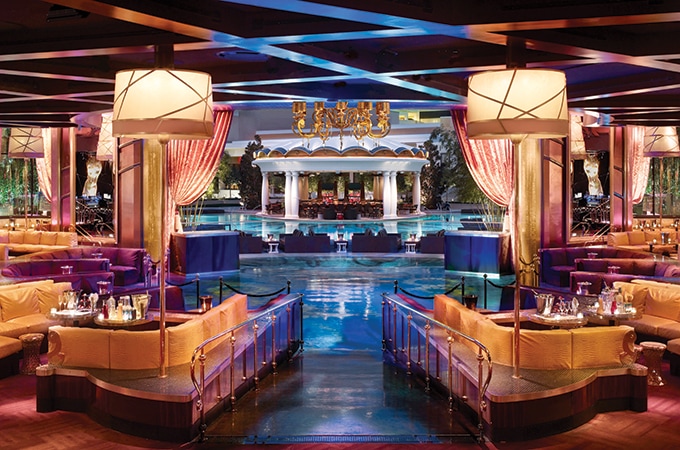 It’s the only city in the world that’s been purpose built for fun – adult fun that is! Rising like a neon mirage out of the arid desert sands (seen from space it’s the brightest area on earth), Las Vegas might have started out as a one-horse town with a single casino, but it’s now a stylish and exciting destination that’s loads of fun with a capital F!

Where else could you see the Eiffel Tower, Arc de Triomphe, Statue of Liberty, Brooklyn Bridge, Trevi Fountain and Venice all in one day? Where else could you sleep all day and party all night without feeling guilty? Vegas is party town central and it has the restaurants, casinos, extravagant shows and night clubs to make magic happen every night.

The world’s love affair with the city began in the 1950s when the media dubbed Vegas as the coolest city on earth, and all because after finishing their nightly show, Frank Sinatra and the other members of the famous Rat Pack would prowl the Strip gambling, drinking, fighting and womanising till dawn, giving reporters fantastic fodder for the news gristmill with their ‘boyish’ shenanigans. These guys made the city swing and brought sophistication to a stretch of road that, until then, had been denigrated as a destination suitable only for hard-core gamblers and gangsters.

Frank Sinatra is well remembered in this town but he’s not the only famous crooner who has made his mark on this city. Of course I’m talking about the KING, Elvis Presley who will forever be remembered thanks to the many Elvis wedding celebrants and impersonators who call Vegas home.

The following is by no means the definitive couple’s guide to the best of Vegas, but it’s what I experienced in four days as a guest of the Las Vegas Visitors Bureau so it’s as good a starting point as any when planning your own vacation in ‘Adult’s Disneyland’.

You don’t go to Vegas to shop but to be truly dazzled by the ultimate in retail finery, walk through Wynn Hotel where Cartier, Loius Vuitton, Chanel, Alexander McQueen and Manolo Blahnik amongst other notable brand names make up a shopping avenue of the world’s most prized possessions… but leave your credit card back at the hotel! Another ‘don’t miss’ is the Forum Shopping Centre at Caesars if only for the over-the-top Roman ambience which is simply amazing and includes musical emperors and senators. Enjoy la Dolce Vita with restaurants and some very good shopping all under an ever- changing Tuscan sky!

In a city that has more fine dining options than any city outside Paris, it’s hard to name just a few shining stars but Wing Lei at Wynn Casino (702- 248-3463), the only Michelin-starred Asian restaurant in North America is one fantastic experience that you will remember for a very long time. Restaurant Guy Savoy at Caesars Palace (877 346-4642) has received widespread critical acclaim including Newsweek International calling it “the best restaurant in Las Vegas, and one of the finest anywhere.” Designed to emulate the famous Paris restaurant of the same name, the menu includes many classic Guy Savoy dishes and for a lighter taste try the Bites and Bubbles menu in the Bubble Bar where you can sample the flavours with “small plates” in a more casual setting.

Try the High Roller sushi of lobster, black truffles and Kobe beef, topped with a 24-carat gold leaf at Sushi Roku – Forum Shops at Caesars Palace (866-588-6210). The decor is exactly the right ambience with stone, timber and the sound of running water married perfectly to the ambient lighting. A fabulous dining experience!

DANCING WITH THE STARS

All the best clubs in Vegas get really packed so it’s best to get in early. XS at Wynn is a stunning venue with an indoor/outdoor pool location. Four distinct, funky club areas in one spot, Pure at Caesars (voted number one nightspot in the country by E! Entertainment) offers a fabulous view of the Strip from its Terrace bar area and scintillating views of the long, long legs of the delectable pussycats in the Pussycat Dolls Lounge. The CatHouse at the Luxor looks like an old fashioned bordello and has quickly become the A-List place for celebrities. The Ghost Bar at The Palms is supposedly the hottest ticket in town but there’s plenty of hotspots all over town to keep you dancing till dawn!

Def Leppard, Avril Lavigne, Matchbox Twenty, P.Diddy, Nine Inch Nails, The Fray, Peter Frampton – you name it, every big band and singing star in the country has played or will play a concert at the fabulous Pearl Concert Theatre in the Palms Resort & Casino. This is the city’s hottest venue for seeing your favourite band or rock singer and it’s also a very cool place to stay.

I have had my body pummelled, scrubbed and anointed all over the world but never in surroundings as gorgeous as Qua Baths and Spa at Caesars Palace. Pure Roman decadence is the order of the day with the lavish decor of stone and timber, the Roman spa baths, the Arctic Ice Room (snow falls from above!) and the ultra-heated Laconium Room. With 51 treatment rooms (everything is bigger in the states!) including couples rooms, you never have to wait to be pampered silly.

Two pools, private daybeds and cabanas, sexy wait-staff, cool cocktails, DJ-spun music and delicious food platters make Mirage a delightful respite from the harsh Vegas sun. They call it European-style sunbathing but methinks they mean topless! We spotted David Spade chilling out by the pool on the day we were there but because this place is a beacon for LA’s top celebs, you never know who you’ll spy!

GET OUT OF TOWN

It goes without saying that you MUST visit the Grand Canyon but other options for a day out of town include a visit to Lake Mead where you can hire a boat and take a spin up to the Hoover Dam or get physical on one of the walking tracks. It’s an amazing part of the country. Nearby and only 35 kilometres from Vegas is the clean, green oasis of Boulder City, a charming, quaint, old-fashioned town of only 15,000 residents with an interesting Hoover Dam Museum.

The spring and autumn seasons are generally considered ideal. Summer can be really hot with temperatures reaching 35 ̊C, winter is mild at around 15 ̊C but it has been known to snow!