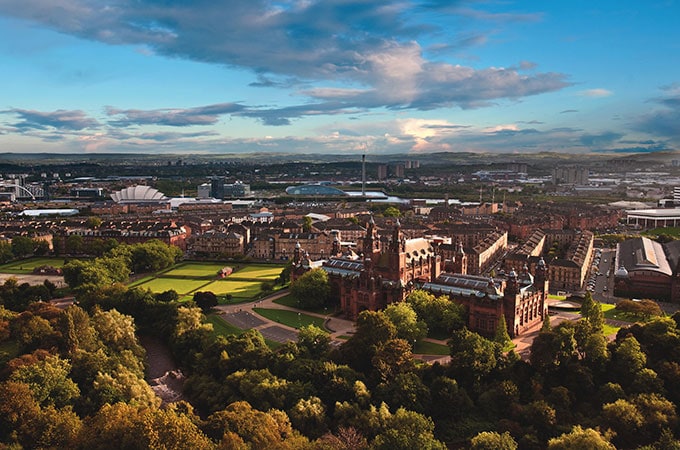 First-time visitors to Glasgow could be in for a pleasant surprise. As the cradle of the Industrial Revolution, Glasgow was once the smokiest, dirtiest city in Europe – famous world-wide for its shipyards and manufacturing of steam locomotives.

But ever since the last ship left the Clyde, Scotland’s second city has been slowly reinventing itself and is now a style centre to be reckoned with. In fact the River Clyde – the city’s lifeblood and the reason why people settled here in the first place, has had a major transfusion with massive injections of culture, style and art.

Ask any local cabbie and he’ll happily regale you with childhood memories of playing on the industrial riverbank in areas now occupied by perhaps Sir Norman Foster’s fabulous Clyde Auditorium known affectionately as the ‘Armadillo’, Iraqi architect Zaha Hadid’s impressive Riverside Museum of transport, the new Foster + Partners Hydro national arena or even the Ark Bridge, known locally as the ‘Squinty’ bridge since it crosses the Clyde on an angle.

Visitors shouldn’t be surprised at this seemingly sudden emergence of things cultural. As anyone who joins a walking tour of the city with either a knowledgeable Blue Guide or a young enthusiastic student from the Glasgow School of Arts will soon learn, the city is full of architectural gems (arguably those of local national treasure, architect and designer Charles Rennie Macintosh are a highlight) and is a hotspot for emerging artists with some half dozen Turner Prize winners having trained, worked or been born in Glasgow in recent years. Glasgow will host the Turner Prize in 2015.

There is much to see in Glasgow, and although an immensely walkable city, it is spread out. It can be a good idea to take an upstairs seat on a hop-on hop-off bus simply to orientate yourself and pick the eyes out of where you might like to further explore: the Botanical Gardens (take a picnic), Kelvingrove Art Gallery and Museum, lovely grassy Glasgow Green or simply shopping in Buchanan Street, the city’s ‘style mile’ – the UK’s largest retail centre outside of London’s West End.

Taxis are as cheap as kippers so take one to travel south to view Rodin, Degas, Cézanne and an eclectic assortment of treasures at the outstanding Burrell Collection set in the beautiful woodland setting of Pollok Country Park; then take another north to Glengoyne Distillery, considered the country’s prettiest where you can indulge in a decadent chocolate pairing with whisky — with custom-made chocolate by Glasgow chocolatier Nucoco, or indeed, create your own special blend.

In the city, hotels are popping up with a wonderful mix of heritage and chic such as the funky ‘sleep boutique’ 15 Glasgow with just five rooms, the trendy CitizenM – the first of the brand outside the Netherlands, and the very handsome five-star Blythswood Square hotel in the £26 million (AU$46.8 million) transformation of a landmark building, the former home of the Royal Scottish Automobile Club. Indulge in a pampering massage in its spacious basement Urban Day Spa, the first of its kind for Glasgow. In the city’s West End, the Hotel du Vin at One Devonshire Gardens is a luxurious haven of peace and style that lures visiting celebrities with fabulously furnished rooms, an excellent restaurant and a cosy bothy for summer fun.

Don’t think the cuisine here is all haggis, neeps and tatties (turnips and potatoes), although you could be pleasantly surprised if you try this traditional dish at the very informal Café Gandolfi in Merchant City. Foodie stand-outs include popular Guy’s Restaurant and Bar in the heart of the Merchant City, where a former caterer to the stars has set up his inviting eatery with contemporary fare and romantic live music, and the exceptional Chardon d’Or where Brian Maule, once head chef at the Michelin-starred Le Gavroche in London, offers a seamless, unpretentious dining experience with his French-inspired menu – perfect for that intimate dinner.

In 2011, Glasgow was named European City of the Year and Louis Vuitton has featured Glasgow twice as a must-visit destination in their coveted European city guides – first in 2009, and again in 2013, highlighting the city’s international growth as a ‘leading retail, cultural and style centre’. For the record, the LV guide recommends small independent businesses such as the quirky ‘mini department store’ Pierrot et Coco, Young’s Interesting Books of pre-loved tomes, Tapa Organic Bakehouse and coffee shop, popular Starry Starry Night for vintage clothing and Crabshakk restaurant in Finnieston for fresh local seafood.

Glaswegians are an agreeable lot; sharing much in common with their Antipodean counterparts – including ready smiles and a cheeky sense of humour.

In July, Glasgow will host the XX Commonwealth Games when hundreds of thousands of visitors are expected to descend on the city to watch 6,500 athletes from 71 countries compete. This year is also Homecoming when Scotland is hoping that some of Australia’s 2.5 million Scottish descendants might wish to return to discover their ancestral roots.

Blythswood Square Hotel, is centrally located and gives a great sense of place with its tartans and automobile memorabilia.

Take afternoon tea in one of the many tea houses such as the wonderful Rennie MacIntosh-designed The Willow Tea Rooms in Sauchiehall Street.

Discover the city through the eyes of a local. Take a private walking tour of Glasgow with a Blue Badge Guide, visit www.stga.co.uk; or join an art-focused city tour with a student of the Glasgow School of Art.

Browsing the many vintage shops around Ashton Lane and the very chic Great Western Road precinct.

Take a bird’s eye view of the city and breath-taking scenery on a Loch Lomond Seaplane, departing from the River Clyde and flying low over beautiful Loch Lomond and Scotland’s stunning rugged West Coast.