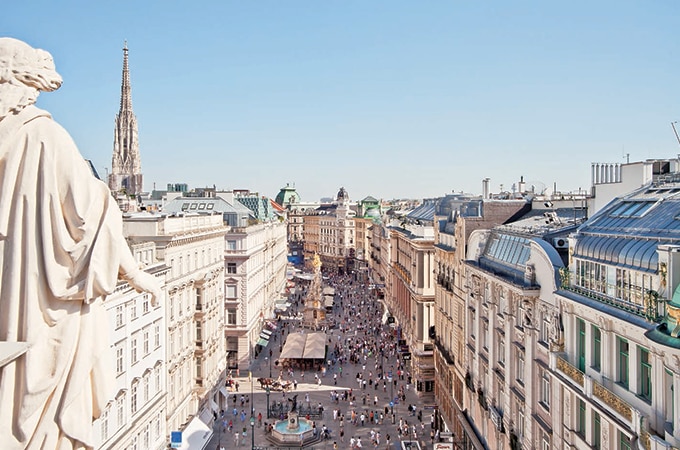 Romantic adventures in Vienna? Don’t get Christian Paral, the smartly-suited concierge at Sofitel Vienna Stephansdom, started. “It’s just too easy a question” he smiles with a glimmer in his eye before launching into his must-do list – which, like the cobble-stoned Austrian capital itself, is laced with history, yet is cosmopolitan to its core.

First: A candlelit, three-course ‘crystal dinner’ inside Das Wiener Riesenrad, Vienna’s spectacular Giant Ferris Wheel, which soars almost 65 metres above the city’s landmark Prater funfair. Ordinary rides on this showpiece of 19th century technology (it first opened to passengers in 1897) cost adults EU09 and are spectacular enough. So at EU405 this is special-event dining. It features wines, Champagne, a sparkling Swarovski gift and the promise of romance beyond compare.

Second: Get carried away by tradition in a cosy horse and carriage ride (Champagne picnic optional) in one of the fiakers that have clipclopped for centuries through the city’s medieval streets. Fairytale fantasy comes at a price and fiakers are probably Vienna’s most expensive mode of transport but they are also by far the most seductive. Options include hopping aboard at one of the many ‘fiaker stands’ dotted about the old city or having your hotel organise a pickup from the door.

Third: Lunch at Artner on Franziskanerplatz; a restaurant in one of the oldest Viennese quarters. Elegant, featuring an Austrian-international menu, and mid-range in price, Paral favours it because it melds the ancient (it is set inside a centuries-old stone building) with the new (its sparkling interior). List done, the concierge can’t resist adding just one more, slightly cheeky, suggestion. Le Loft, the Sofitel’s own bar/restaurant on its 18th floor, he tells me, gesturing to the hotel lift that goes straight up there. “Take it,” he urges. “You won’t believe the view.” Certainly, perching on one of Le Loft’s sleek bar stools invokes a remarkable lightness of being. Above you floats a glowing, canopy-like ceiling mural; a remarkable creative achievement by Swiss-born artist Piplotti Rist. Beyond is the cityscape panorama featuring Art Nouveau and Gothic gems (think the Urania Observatory and the Stephansdom cathedral) visible through floor-to-ceiling glass walls.

This is classic Vienna: sophisticated, spirited and surprising. Beyond the lure of its clichés – the exuberant operas, balls, palaces, pseudo-Hapsburg decadence, chandelier-lit coffee houses and schnitzel – there is so much more.

Couples keen to discover what this city has to offer from the ground up, as though living like locals, can even do that by booking into a ‘street loft’ – one of a new range of ground-floor, smartly-designed apartments in the centrally located Wieden district. Created by the so-called Urbanauts, a group of architects, these private, stand-alone flats cost EU140 a night and offer an entirely private kind of accommodation. The idea is that guests can imagine they are lodging in the homes of absent friends who have been kind enough to leave them dining recommendations, tips on where to enjoy spa treatments, a minibar and full use of their bikes. Indeed using pedal-power to leisurely explore this city makes perfect sense. Vienna’s 1,500-kilometre bike path network has spawned two-wheel tours taking in everything from the Ringstrasse’s cultural highlights to the outlying Vienna Woods, and the Citybike public cycle rental scheme is tourist-friendly. With 100 ‘stations’ dotted about the city for bike pick up and drop off, it has a simple, EU01 registration system, and a rather seductive fee scheme (the first hour is free). Bikes are also perfect for sampling Vienna’s off-beat creative DNA, such as the acres of graffiti – some of it quite inspired – running along the Danube Canal; a quiet, easy ride also featuring outdoor artwork displays, cafes, waterside bars and, during summer, imported sections of sand doubling as beaches. There are plenty of other ways of exploring Vienna, from traditional boat cruises up and down the Danube to Segway tours requiring a brief training session on how to handle these battery-operated beasts, a hard hat (don’t worry, it comes provided) and a penchant for zipping through back streets in a low-energy, whistle stop, major monuments tour. But nothing really beats taking advantage of the very user-friendly public transport network, and walking.

Probably the city’s most memorable organised foot tour, run by Dritte Mann Tours, involves descending into the sewer system immortalised by Orson Welles’ classic 1949 movie The Third Man. Many Viennese hotels actively help out when it comes to discovering the city’s lesser-known attractions by printing their own bespoke mini guidebooks. In the artist district of Spittleberg, a short walk from the gallery and museum-packed Museums Quarter, the charmingly eccentric Altstadt Hotel provides a pocket-sized booklet listing owner Otto Ernst Wiesenthal’s favourite restaurant, café and on-trend bars. The nearby Hotel Sans Souci offers a mapfilled ‘Alpha Guide’, packed with ‘hip’ lists for dining, shopping, drinking and exploring, and tongue-in-cheek explanations of Vienna’s social strata. Nuggets include the ‘fact’ that there are 30 Austrian terms for being drunk, and that ‘grantig’ – a word used to describe the crotchety behaviour Viennese citizens are supposedly known for – translates as “grumpy … supercool”.

True or not, this city’s capacity to captivate increases with every turn. A brief stroll from the San Souci on Neustiftgasse reveals Kristian’s Monastri, an atmospheric, cosmopolitan bar-brasserie inside what used to be a monastery. Its leafy, cobblestone courtyard is set in a little alleyway which runs between the Neustiftgasse and Lerchenfelder Straße, and which also leads another treasure: the delightful Gallery and Café Kandinsky. Here you can examine contemporary art (the work is for sale), order an inexpensive lunch, apfel strudel, or just order a coffee and drink in the details. On this visit someone had attached a yellow post-it note on the menu decorated with a little heart and the suggestion ‘Take Love’. Sweet indeed.