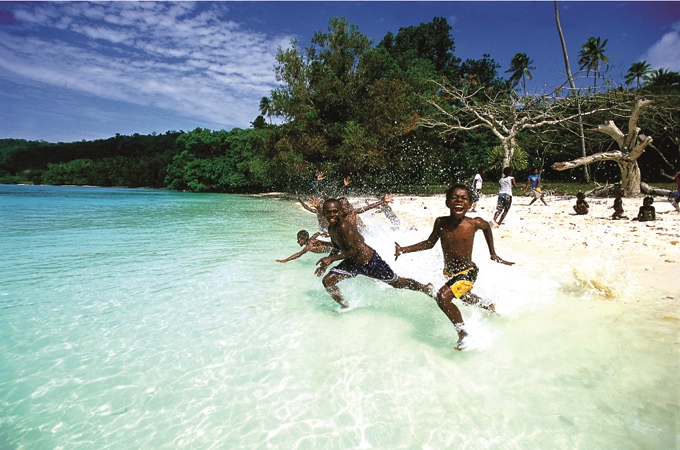 My first visit to a Pacific island was to lovely Vanuatu a little over two decades ago and I fell totally under its spell. I still have a vivid memory of our first morning at Warwick Le Lagon Resort, sitting on the verandah of our overwater bungalow on Erakor Lagoon as the sun rose, watching the locals paddling to work in their canoes, their big wide smiles and greetings of hello ringing clear across the water. It looked like nirvana to me and so very different from my usual drive to and from work on congested roads. It was a peaceful, idyllic place and I think it was the first time I had truly relaxed on a holiday!

I have returned more than a dozen times since that first magical visit and in twenty years,Vanuatu has lost none of its appeal — there’s just so many different experiences to be savoured and enjoyed!

Once we went to the island of Tanna where we climbed to the top of Mount Yasur, squealing like kids as the he still active volcano spewed steam, sulphur and smoke into the atmosphere and deep phlegmy rumbles shook the ground around us. It was one of the most exciting things I have ever done and I can definitely recommend a visit. We went in the day but they say in the night it’s just awe-inspiring as the sky lights up when Yasur erupts.

We also visited a custom village where the villagers dress up in traditional grass outfits, the men and children’s faces painted in wildly bright colours, the women dressed in only a grass skirt selling their hand-made souvenirs from dusty market stands — what a unique experience and a unique island!

The flight over from Vila was in a small plane with the back half filled with cages of chickens and goats and as we came in to land on the grass airstrip, it seemed that half the population of Tanna was there to greet us, all waving madly like long lost friends.

On another trip we flew to the island of Esperito Santo long before the international airport was built, at a time when you had to be weighed before flying and the pilot brought his dog along for the ride!

We drove along pot holed roads for an hour to swim in the cool, vivid turquoise waters of the amazing freshwater swimming holes called Blue Lagoon which are fed by a natural spring before setting out for another hour of bumping and grinding until we reached the dazzling shores and pearly pink sands of Champagne Beach – Vanuatu’s most beautiful, palm-fringed beach where cruise ships regularly call.

In those days the outer island of Santo and its capital Luganville was a real frontier place and a mecca for divers who still come from all over the world to dive around the wreck of the sunken battleship, SS President Coolidge – but nowadays, with its lovely beachfront and private island resorts such as the eco luxury, Ratua Private Island and Bokissa Island Resort, Santo is a drawcard for couples looking for their own little piece of honeymoon or holiday heaven and from everything i hear, this is where they find it – but don’t expect any wild nightlife!

And Vanuatu still offers this very different and exciting style of holiday to those wanting to get out and explore but for those who just want to relax by the pool, lagoon or beach there’s plenty of options for a laid-back escape.

Port Vila is the capital of Vanuatu, situated on the island of Efate, one of over 80 islands which make up this island archipelago which extends 1176 kilometres between the equator and the tropic of capricorn. it’s a three and a half hour flight from Sydney or two and a half from Brisbane and is only 230 kilometres from new caledonia and 800 kilometres from Fiji. Before 1980 when it became an independent nation,Vanuatu was a condominium of Britain and France and even today, there’s a French flair and British sensibility still apparent in the food, wine and fashion.

First time visitors can be dismayed when they see the rather run-down state of the roads and footpaths driving from the airport to Vila but it doesn’t take long to catch the tempo of island life, to appreciate the islanders love of their island home and to fall under the spell of their laid back approach to life – with or without a little kava to help you relax!

Don’t expect to find palm-fringed beaches around Vila because there aren’t any. Vila is built long and low along one of the most picturesque harbours in the Pacific with placid waterways and lagoons its main selling point. many resorts are built around Erakor lagoon (Warwick Le Lagon and Erakor island resort), second lagoon (sunset Bungalows) and right in the main harbour (Iririki and Sebel) plus there are some lovely beachside resorts such as Eratap situated on a peninsula 20 minutes from town and the Havannah, a spectacular hideaway on the north-west coast around 30 minutes from town… There’s loads of choices for a romantic getaway for two.

Activities mostly revolve around the water and include day trips snorkelling and barbecuing on deserted islands, sailing and deep sea fishing, sunset cruises and a visit to the cascades waterfall. There’s some lovely restaurants along the harbour and at the resorts and many of the resorts offer melanesian nights with local food served buffet style and custom singing and dancing. There’s also a few local pub style bars with live music and local dance clubs but the nightlife can’t be described as wild.

Why you’ll love it:
Make your own adventure – take an off-road buggy tour; go snorkelling, diving, trekking, abseiling, sailing, deep sea fishing (some of the best in the Pacific!), horse riding and golfing – there’s no shortage of activities to keep you busy.

Best suits the couple who:
Don’t expect a city like Honolulu, department stores like David Jones or beaches like those in Australia, but who do like to delve into island traditions, learn about how other cultures live, and generally take it easy when on holiday.

Most romantic thing to do:
A helicopter ride to get dropped at your own private island for a romantic picnic on a beautiful white sand beach – heavenly!

Climate:
Vanuatu’s climate varies from wet tropical in the north to subtropical in the south which is where Port Vila is located. The dry season is from May to October when the weather is usually gorgeous with pleasant cooler evenings. November to April is the wet season when there can be very heavy downpours and perhaps a cyclone – Vanuatu averages 2.5 cyclones a year. Always take a jacket whatever time of the year you visit.