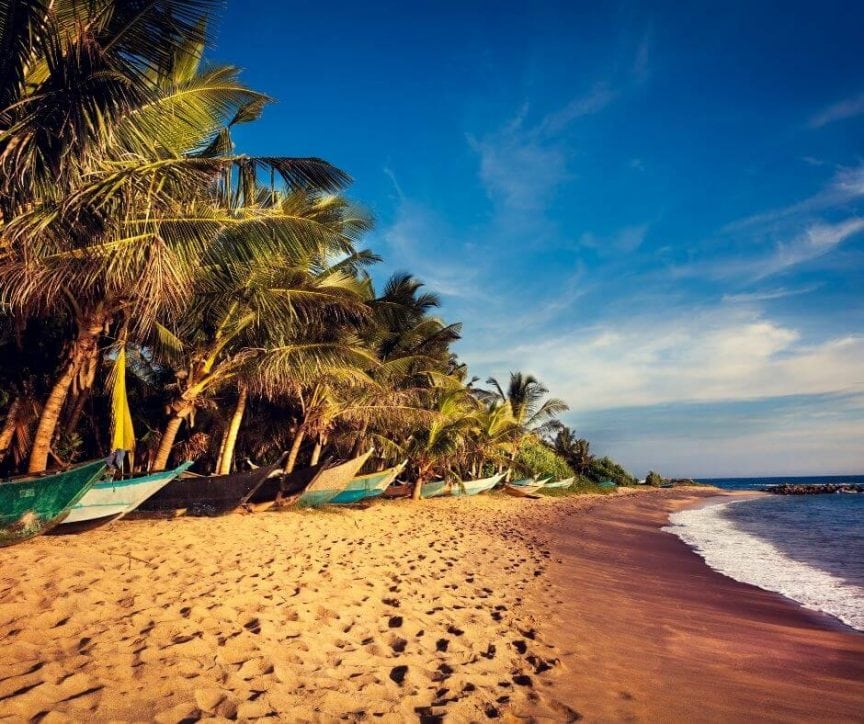 After more than a quarter-century of civil war, peace has returned to Sri Lanka, making it a magnet for travellers. Tanya Joslin shares the best places to visit in Sri Lanka.

From stunning beaches to lush national parks, and exotic temples to emerald-green tea plantations, Sri Lanka packs a punch when it comes to the diversity of things to do and see.

As you start planning your Sri Lankan holiday or honeymoon, you should note that, although the island is compact, away from the main freeways, the driving is often painfully slow, and few people choose to self-drive. So, unless you plan to simply ‘flop-and-drop’ on one of the island’s gorgeous beaches, the best way to experience Sri Lanka is to map out a route based on the sites you want to see and hire a private driver to get you from the beginning to end.

Allow us to introduce you to some of our favourite locales in Sri Lanka. We think you might love them too …

All visitors arrive at Bandaranaike International Airport, about 35 Km outside Colombo. You’ll want to start your Sri Lankan odyssey with a night or two at either Negombo, a beach-side town near the international airport and a great place to ease into your Sri Lanka holiday after a long flight, or do the trip to Colombo.

Negombo beaches are nowhere near as lovely as the ones you’ll discover when you start exploring the southern part of the island. Still, the town offers an enjoyable introduction to coastal Sri Lankan life, the second largest fish market in the country, and some good hotels (we tend to stay at Jetwing Beach, designed by notable Sri Lankan architect Geoffrey Bawa).

Sri Lanka’s cosmopolitan capital Colombo, with its 750 000 residents, is full of contrasts – from monumental colonial-style buildings and extensive parks and lakes to temples and chaotic narrow streets.

Before leaving this part of Sri Lanka, a must-see is Mount Lavinia Hotel, just outside Colombo. Sir Thomas Maitland was the former Governor of Ceylon (Sri Lanka) between 1805-1811. He fell in love with a half-Sinhalese and half-Portuguese dancing girl, Lovina. In those days, a courtship such as this was out of the question, so when Sir Thomas had his palace built, he ordered the construction of a secret tunnel to Lovina’s house.

Today the palace is one of the country’s best-known hotels. It offers visitors a chance to step back in time and discover a tale of mystique and romance with one of Sri Lanka’s most secret and unusual love affairs, and if you visit late in the day, you might even catch a spectacular sunset.

Where you decide to head from here will be a tough choice. As we said, there’s so much to see and do in Sri Lanka! Culture vultures will have much to discover on their Sri Lankan vacation, so start researching a shortlist and considering the logistics.

Take, for example, Anuradhapura, the ancient capital from the 4th century BC until the beginning of the 11th century AD. Or Sigiriya (Lion’s rock), an ancient rock fortress and palace ruin and an essential part of Sri Lanka’s Buddhist history.

Then there is Kandy, an administrative and religious city and home to the famous Temple of the Sacred Tooth Relic, where it is said that the tooth of Buddha himself resides.

The annual Esala Perahera procession, a historical event in which the sacred tooth relic of Buddha is paraded through the streets of Kandy, happens in July or August. It’s a spectacular affair – well-dressed elephants, musicians, and performers walk along the routes with the tooth relic in a casket. If you plan to visit Sri Lanka at this time, consider putting Kandy on the itinerary for a few nights for a truly unique experience.

If you do visit Kandy, be sure to put aside a day and hire a driver to visit the hill town of Nuwara Eliya, where you’ll enjoy the beauty of the tea plants along the way (stop and do a tour at a tea station). The roads can be winding, but the scenery is dazzling at times.

Nuwara Eliya is entirely different from anywhere else in Sri Lanka. It is a peaceful town with lovely, green scenery, cooler temperatures than the rest of the island, and fascinating modern history that roughly dates back to 1818 when Dr John Davy discovered Nuwara Eliya as a place with a similar climate as England, full of wild animals for hunting such as Elephants.

Stop in for lunch at The Grand Hotel (or, even better, book a night). This historic property has welcomed guests from across the globe since the late 19th Century.

Yala National Park is a unique destination that offers the chance to see one of the most beautiful big cats, the Sri Lankan leopard – but you’ll need to get up early to spot one! – and elephants, birds, and buffalo. Unlike the safaris of Africa, Yala is still relatively undiscovered, but its renown is catching up to its African counterparts in many ways.

More things to do and see in Sri Lanka: Adventure Seekers – Check Out 10 of the Best Experiences in Sri Lanka Here!

For many, the attraction of Sri Lanka lies in the beaches, and you’ll find some of the most beautiful in the island’s south with 170km of magical coastline lying east of Galle.

Just 15 minutes drive from Galle is Unawatuna, with its clutch of super-chill beach bars and restaurants. Head a little further south, and you’ll come across the charming Talpe, with popular surf spots nearby. Then we come to Weligama, the perfect place for learning how to surf with plenty of surf schools. Weligama is also where you’ll see the famous stick fishermen (locals who spend hours fishing whilst precariously balanced on small platforms in the sea).

Keep going, and you will hit my favourite beach, Mirissa, a launching pad for whale & dolphin watching and a wonderful place to spend a day. Head further south, and you’ll reach the famous lighthouse at Dondra-Head, Sri Lanka’s most southerly point, and the secluded Mawella Beach before arriving in the town of Tangalle, known as ‘Tangalla‘ by the locals. Here, you’ll discover a relaxed pace of life and architecture that draws upon the Dutch colonial times.

You can explore much of the south by basing yourselves in the World Heritage-listed Galle Fort, where you’ll discover the old world charm of colonial-style houses, boutique hotels, restaurants and bars. All this with the south’s famous beaches as little as a fifteen-minute tuk-tuk ride away. Do what we did, and grab a driver for a few days to get out and explore on the days you want to go further.

If you are a couple on a romantic getaway or honeymoon, indulge in a stay at one of the ten designer rooms at the exclusive Kahanda Kanda, 30 minutes from Galle, for even a few nights.

Set amongst the emerald-green paddy fields of a working tea plantation, this chic boutique hotel is within easy reach of the main sights, yet far enough away to feel like a true lovers’ hideaway. Drive 20 minutes to Weligama for a morning of sun and sand and return in time to be sipping cocktails on oversized day beds and a dip in the pool as you soak in the serene surroundings for the afternoon. If you can’t afford to splash for a few nights, enquire about visiting for lunch.

While tourism is vital to Sri Lanka and a big part of the country’s economy, in most places, tourists do not dominate to the extent where you feel things are being ruined. It still feels very ‘authentic’.

Some feel that this could change as more and more tourists flock to Sri Lanka. In recent years a slew of hotels were upgraded and new ones developed, and a new freeway opened which made travelling around the island easier and quicker. Things are slowly but surely on the move.

Right now, though, you can stlll find a quiet beach and get in touch with the real Sri Lanka.

Another thing you’ll love is the food–Sri Lankan cuisine is probably one of the most underrated in the world. The curries are delicious (some say better than Indian curries!).

Best suits the traveller who:

Is looking for a laid-back holiday. If you’re more of a Seminyak kind of couple and you need a massive choice of world-class restaurants, shopping, bars, and nightclubs, then Sri Lanka isn’t for you … yet. But, as we said, things are changing, and who knows how fast progress will come now?

When it comes to nightlife (outside of Colombo), you’ll find genteel bars with a colonial atmosphere (try Amangalla and The Galle Fort Hotel) and casual beach bars. Having said that, Unawatuna’s relaxed bars can become party-animal magnets when visiting and local DJs play to international crowds!

Sri Lanka really is The Land of Smiles, but we strongly suggest you get there sooner rather than later as tourism is evolving quickly and new developments are announced all the time.

For more information or to find your dream Sri Lanka hotel or resort, visit here