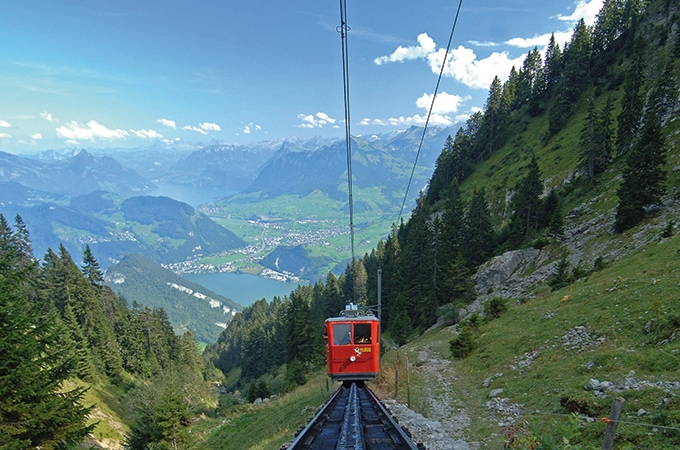 It’s 5.30 on a summer morning in Switzerland, and we’re standing in a paddock as the sun starts to climb above the surrounding mountains and hills. In front of us, a hot air balloon is slowly inflating, and when all preparations are completed, we step into the reassuringly sturdy basket and slowly begin to rise through the clear, chilly air.

Time passes like a dream as we drift ever higher, looking down on green valleys, rocky peaks and mountain pastures where farmhouses dot the summer alpine pastures. In the quiet, we can hear a dog barking, and the clanging of the cow bells – but that’s all, apart from the reassuring whoosh of the flame inflating the balloon.

We were in the Pays d’Ehaut region which lies between Lausanne and Interlaken – you’re out in the country here – it’s truly breathtakingly beautiful, in a place where cows stroll through the little villages on their way to the high pastures. The downside (if it is a downside) is that the cows leave their mark as they go and there’s a lingering reminder in the air of their passing. I had met some of these cows earlier, when the previous afternoon, the more adventurous of us had elected to go paragliding and had launched off the side of a perilously steep hill at one of the mountain farms. Swooping through the air it had looked divinely bird-like and I wondered if I should have been a bit braver – but I did get to see the famous Swiss cows up close and they are big! And beautiful.

Our balloon came down to Earth with barely a bump and we went for a stroll through the village of Rougemont, where all the buildings are in the Swiss chalet style – many are very old and any new buildings have to conform to the chalet style to retain the authentic ambience of the village. There’s a gorgeous little church adjacent to the chateau which is worth a visit, but the charm of Rougement is in its architecture and the slow pace of life in the village. Hiking, ballooning, paragliding, and swimming are all on hand in summer, and in winter, there’s skating and skiing as well.

We had come from Lausanne where the city sprawls down a very steep hill which is mitigated by a very good tram system which whisks travellers up and down without too much exertion on their part. The city is home to the Olympic Museum and it deserves at least a couple of hours to fully appreciate just how comprehensive and interactive it is. The building is also architecturally interesting and sitting on the terrace over a cup of coffee is a delight. After a couple of hours exploring the city, the museum in its quiet lakeside setting is a contrast you will be sure to appreciate.

Just a short 15 minute train ride away from Lausanne is the charming town of Morges, and with its pedestrianised old town, it’s the perfect place to stroll and enjoy a bit of window shopping – you’ll no doubt want to engage in some people watching at some of the cafes that line the cobbled street, and listen to the locals chatting in French and sometimes, German. Don’t indulge in the pastries though, because just a little way away is the former home of Igor Stravinsky, now a restaurant with a terrace overlooking the garden. It’s a delightful place to have lunch or dinner – try the duck! Between courses we wandered in the garden on a perfect summer’s day, and then made our way, somewhat heavier and in need of a walk, to the castle beside the lake. It’s picture postcard perfect and the promenade along the lake front is a total joy.

If you love a Chateau with a magnificent garden (what’s not to love?) take yourselves off to Chateau de Vuillierens – still owner occupied, only the garden is open to the public – but what a garden it is!  Dotted with wonderful sculptures amidst flower beds of iris and day lilies, roses and a gorgeous grove of trees it’s the perfect marriage of art and nature in a gorgeous setting – the gift shop is temptation writ large, and if you take my advice you won’t go there after sampling the wine tasting!

We hopped on the train and took ourselves off to Basel on a very hot day – even for Aussies – so adjourned to the river for a cooling breeze and a very civilised lunch at one of the many cafes and restaurants. Basel is on the border with Germany and France and the Rhine River runs through it – on this particular day, the locals were cooling off in the river, floating down through the town buoyed up by inflated bags which held their clothes – simples! Suitable refreshed by lunch, we wandered the streets of the old town and watched a game of boules in a park by the cathedral before making our way to the town hall – you just can’t miss it, it’s red! Basel is very well served by a tram system, and your hotel will give you a card which gives you free access to it – it’s travel made simple. We used the tram to get to dinner that night Ms Veronica, a restaurant and bar high above the river in a former bath-house – the locals were still swimming below as we took in the sunset and wallowed in the warmth and the cool drinks…

By way of complete contrast, the day before we had been standing on the top of a mountain rugged up in jackets and scarves, boots and gloves, bathed in glorious sunshine under a deep blue sky. From Interlaken we had taken the train to the Jungfrau through tunnels which went for miles to the summit. We took in the fabulous views down glaciers and across to other snowy peaks and then ventured outside into the purest air we had ever experienced – it was intoxicating to stand so high (11,000 feet) and it might have been the altitude, but we found it terrifically exhilarating. It’s as well to go slowly at this height, which we were more than happy to do, as it allowed the experience to sink into our minds as a never to be forgotten memory.

Switzerland had given us lots to remember – it’s a serene and ordered place which has magically avoided dullness, and which glories in some of the most magnificent scenery we had ever seen. The grandeur of the alps has been praised by better writers than me and all their superlatives are not exaggeration, but for us, the scenery that passed by the windows of the many trains we caught was just as engaging, and infinitely varied with lakes and meadows, charming little towns, and always, the overarching mountains that look down on this beautiful country and its friendly and welcoming people.

The Swiss Pass is the way to go! With a unique all-in-one-ticket solution, it enables you to travel the length and breadth of Switzerland by train, bus and boat, including scenic train routes such as the Glacier Express, Bernina Express, GoldenPass Line or Wilhelm Tell Express, the public transportation in more than 75 Swiss cities, a 50% price reduction on most mountain railways as well as free admission to more than 470 museums.

Is the Swiss Franc, written as CHF and at the moment it is worth approximately A$1.20. A cup of coffee is usually between about CHF 3.60 to CHF5, depending on where you are and how flash to place is.

While you are in Switzerland, take the trip to the Jung Frau – it’s within easy reach of Interlaken and so, so worth it!

To read more about Switzerland, make sure to check out the article on Zurich and Lucerne in the September issue of Holidays for Couples magazine and Tourism Switzerland.