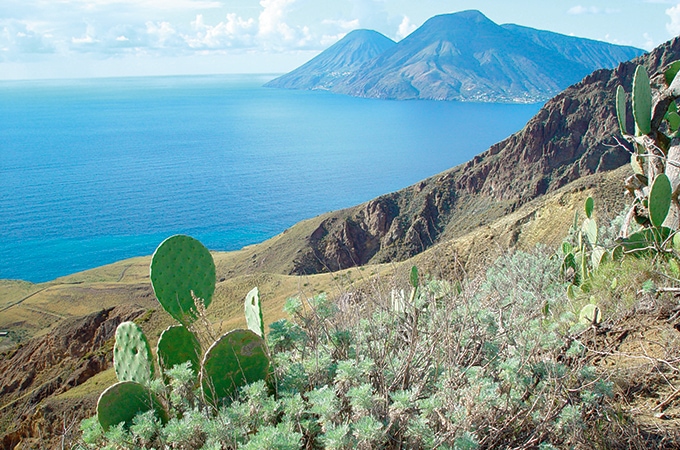 You can smell the Aeolian Islands long before you see them. A sensual odour of thick vegetation and sulphur flows over the waves as you approach. Then, bit-by-bit, steep wild cliffs, deep grottos, and black rocks striped with yellowish tints rise up from the sea.

The seven fabled Islands of the Winds of Homer’s Odyssey look as if they have been knocked into the Mediterranean by a petulant kick from the toe of Italy. The largest, and also the most populated, is Lipari, an hour’s journey by hydrofoil off the north-eastern coast of Sicily, or an overnight ferry journey from Naples.

Lipari’s beautiful harbourside piazza is the best place to start your island exploration. Here, fisherman mend their swordfish nets among colourfully striped boats, and locals and tourists munch on chocolate brioches or sip at glasses of champagne mixed with frozen strawberry granita.

From your place under a shady awning you can watch the larger fishing boats come in, sometimes laden with pots of tiny sweet prawns, their undersides swaddled in bright blue eggs.

Leading off from the piazza is a huddle of four-storey buildings, which edge onto thin alleyways, strung with washing and tubs of red geraniums. Vespa engines rattle in the street, old ladies in black are held up by walking sticks.

Dominating the main town – a mash of outdoor cafes, and stalls bulging with eggplants, garlands of chillies, salted capers and golden bottles of the sweet local wine – is a 16th century acropolis high up on a crag.

A trip around the island is best done by vespa. There is nothing quite like having the wind in your hair as you ride together up into the hills.

Much of central Lipari is made up of terraced fields, scattered hamlets, small vineyards and olives trees. Caper plants cartwheel from cracks in dry-stone walls. The air is infused with the tang of wormwood. Cicadas strum from eucalyptus trees. A sickle of deep blue sea follows you around.

The coastline reveals swathes of beaches, mostly grey-pebbled. You can only reach some of these by clambering down steep paths, but the reward is a place of your own and a dip in the calm, warm sea.

The most popular beach is called Canneto. Again this is a pebbly beach, so you might want to hire plastic sun lounges for the day. Behind is a curve of apricot buildings, featuring gelatarias and bars. Along with the harbour front, this is the place to come for a quiet late evening drink or two. Don’t expect a wild nightlife here.

Out to sea is the violent, yet mesmerising, volcano-island of Stromboli. You can hike to the top of the volcano and witness the eruptions close up, or bob around in the darkness on a tour boat, watching the lava pouring into the sea.

Elsewhere, there is jet-setting Panarea, where the houses are white and the bougainvillea is red. And there’s Salina, a hump-backed island topped with chestnut trees and myrtle.

Other islands reached by hydrofoil from Lipari include Vulcano, with its sulphurous mud baths and black sand beaches. It’s volcanic cone oozes steam, and offers a panoramic view across the sea to Mt Etna on Sicily.

Keep an eye open for Filicudi and Alicudi, too – the smallest, remotest and least developed of the islands. Like the others, they are an ancient world away from the pressures of life back home.

DO take a romantic stroll across sea bluffs sparkling with wild flowers, before settling down for a picnic with wine in the shadow of an ancient olive tree.

DON’T visit Lipari, or any other island or beach destination in Italy in August, because almost every Italian abandons work for the month and heads to the sea.

COUPLES WILL LOVE sipping Campari and blood orange juice in a piazza café under the stars, while the flaking yellow form of the Church of Purgatory glows like a bees-wax candle and the moonlight sparkles off the sea.

WINE AND DINE for intimate candlelit dining head to Ristorante Filippino for local Mediterranean specialities such as squid ink risotto or swordfish with capers.

PLANNING YOUR TRIP for the ultimate Lipari and Aeolian Islands experience contact Tempo Holidays and browse through their range of Italian packages on offer.