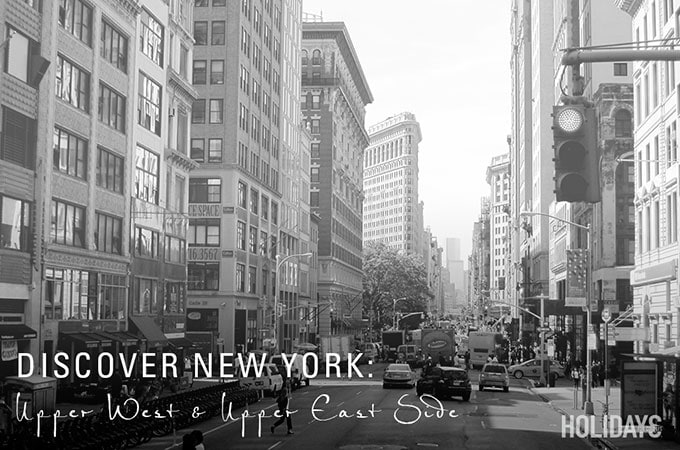 Going on a New York romantic getaway or honeymoon with your sweetheart? Our guide to one of the most luxe areas of New York City – the Upper West and Upper East Side – will help make your romantic adventure a breeze.

Straddling Central Park, an amazing green heartland which runs north to south from 110th Street (Harlem) to 59th Street and across town from Fifth Ave to Central Park West, are the upmarket areas of Upper West Side and Upper East Side. Here, serene streets showcase some of the city’s finest historic architecture with opulent townhouses and mansions lining the pristine sidewalks.

This is where you will see suited doormen hailing yellow cabs for their affluent residents, maids out walking the dog and nannies collecting their young charges from school – it’s where the elite live and it’s utterly charming. This is also home to any number of the city’s most famous and elegant hotels such as The Plaza, The Pierre, Mandarin Oriental, Four Seasons, The Carlyle and the Ritz-Carlton.

… who loves world-class art and cultural pursuits and would happily spend hours wandering the hallowed halls of world famous museums and galleries such as the amazing Metropolitan Museum of Art, with its fabulous collections. Or, couples can try the Frick, which features some of Europe’s best known artists; the American Museum of Natural History; the Frank Lloyd Wright-designed Guggenheim; The Whitney; Neue Galerie and more.

Then there’s the music and dance of the New York City Ballet and the NY Philharmonic Orchestra, who perform nearby – the list goes on.

… a horse and carriage ride through Central Park and then continue the romance with lunch at Loeb’s Boathouse Restaurant right on the park’s beautiful lake – ask for a window table when you book months ahead! The food’s nothing to rave about but the experience is. Then go for a row on the lake before stealing a kiss on the beautiful cast-iron Bow Bridge – one of the park’s most romantic spots.

Before a show or performance, enjoy a cocktail at the Empire Rooftop Bar & Lounge (44 W63rd Street), which features a huge outdoor space with private couch-equipped cabanas, a funky bar and stunning views of the Lincoln Centre and Central Park.

Don’t miss Amateur Night every Wednesday night at the famous Apollo Theatre 253 W125th Street, Harlem for the best fun night out at reasonable prices – comedy and music stars have been making their debut performances here since 1934!

Splurge: The Pierre, a Taj Hotel situated overlooking Central Park at E61st and Fifth, first opened its doors in 1930 to become the city’s most sought after address. Recently re-opened after a $100 million upgrade, The Pierre is still one of New York’s most graceful and elegant hotels and a suite here could be the ultimate New York splurge. Visit online for more details.

Delta Air Lines operates daily nonstop service between Sydney and Los Angeles with convenient connections to New York all booked on one ticket. Choose BusinessElite® for the best experience with 180-degree full flat-bed seats with direct aisle access from every seat and a 15.4 inch screen with state-of-the-art entertainment system with an extensive library of movies, TV shows, music and games.

Metropolitan Museum of Art image by Andrew Mace via Flickr