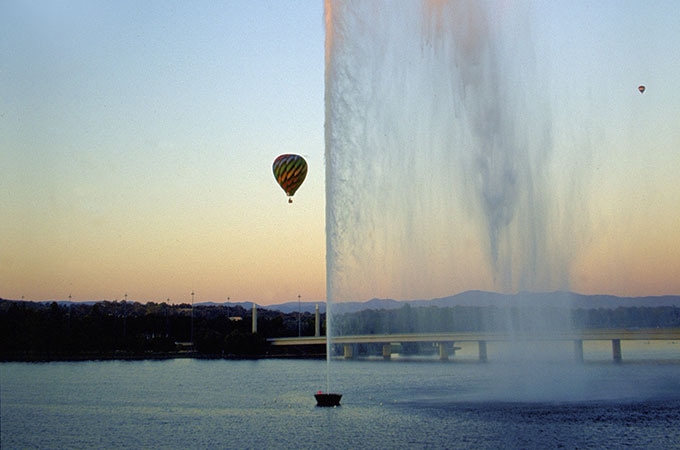 It’s a crisp, dazzling Saturday morning in Canberra.The mountain air is pine-fresh, the sun is warming the streets and parks and you can see for miles out to the Brindabella ranges.

It’s the perfect morning to fill your lungs on a leisurely stroll or cycle ride around Lake Burley Griffin and then reward yourselves with breakfast at the superb Mocan & Green Grout café.This café has all the style of a hip Sydney or Melbourne eatery but there’s something more: a dash of Manhattan cool and a side order of northern California hippie-chic. It’s a good example of the burgeoning café and bistro scene here.

Given the high quality of the food and the imaginative concoctions (rose-scented granola,Tripoli baked eggs, spicy braised beans, etc.), you might expect Mocan & Green Grout to be more than a little pleased with itself, but there’s no arrogance. Instead, there’s an underlying confidence, a friendly welcome and a calm, relaxing atmosphere, very much like Canberra itself.

Also, judging by the mix of accents among the diners, the café is fast becoming a favourite among staff from many of the 140 embassies in the city. As the year turns, these same foreign officials help to perpetuate the international feel that permeates the city by celebrating their national festivals; there seems to be some kind of fiesta going on virtually every month.

Fuelled by breakfast and carrying a bag of takeaway banana bread (couldn’t resist), my wife and I hit the Canberra culture trail.The city’s sparse traffic means getting around on foot is virtually hassle-free, and its extensive cycle path network is perfect for two-wheeled adventures. Spending time in an uncluttered, easy-going and open-spaced city such as Canberra can be very relaxing and quite romantic.

First, we headed for the National Gallery of Australia, primarily to see its collection of modern art: we wowed at the Warhols, loved the Lichtensteins and sat and stared at a giant Jackson Pollock until it made our heads spin.

We strolled next door to the National Portrait Gallery, mainly to check out the photography, and then back across the lake to the superb National Capital Exhibition where Canberra’s unique and quite remarkable history comes alive.

The city’s famous plan, by American architect Walter Burley Griffin, gave it a stately quality that (in my view, at least) is unrivalled by other Australian cities.The broad, tree-lined boulevards are elegant and graceful, and the sweeping view corridors offer a tremendous sense of grandeur. The most notable of these view corridors is the one that leads south from the Australian War Memorial down Anzac Parade, across the lake, on to Old Parliament House and ends with the current Parliament House in the distance. All of these buildings are open to the public.

Burley Griffin also peppered the city with parks and bushland, so much so that only the city centre feels urban.

We found a spot on the sloping verdant lawn outside the National Capital Exhibition where we laid out a blanket, tucked into our banana bread and watched the dramatic Captain Cook Memorial water jet, which shoots 110m into the sky every day from 2-4pm.

Later that day, with the sun slipping behind the Brindabellas and a clear, star-filled sky developing overhead, we walked through the city centre to a funky Asian-inspired bar-bistro called Soju Girl. Canberra’s restaurant scene has really upped its game in recent years and there’s ample choice for couples on a short break. Soju Girl is fun, but for something a little more intimate Canberrans in the know swear by the new Aubergine.

At Soju Girl, over sharing plates of crispy pork in palm sugar caramel and Ma Po (spicy Szechuan tofu with shitake mushrooms), we raised our glasses of Kung Fu rice beer and toasted the nation’s capital before eagerly planning our Sunday.