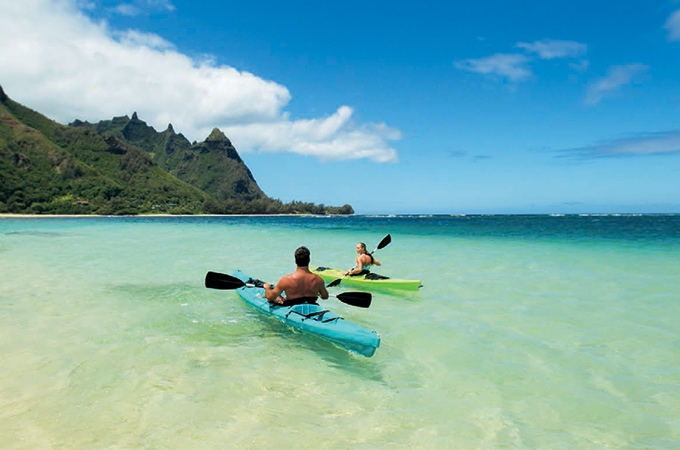 I’m getting married in Hawaii this year. As I’m British and live in Sydney, I’m often asked why. My reply is a tale of two romances.

Hawaii’s swaying music, the idyllic beaches and palms, the fiery volcanos and beautiful people with flowers in their hair seemed the stuff of blissful dreams. In Hawaii movies there was handsome young Elvis crooning love songs with a lei around his neck; graceful girls dancing the hula. Everyone wore colour and a tan. They were happy.

When I finally visited the islands on assignment as a travel writer, I was wary. I had loved Hawaii from afar for so long; how could the reality ever match? I still remember my first steps on the islands; how the balmy air enfolded me, familiar slack key guitar music lulled me, and the fragrance of hibiscus, pikake, and plumeria wafted on the breeze as I’d always known it would. That day, in a display worthy of the finest cinematographer, a perfect rainbow unfurled over Honolulu as I stepped out of the airport.

Remarkably, Hawaii lived up to its hype. And, as in the best love stories, I felt as if I had known it all my life. I’ve travelled there many times since then, and when I met the right man, I wanted him to meet Hawaii, too. To my delight he felt the same way about it, and the two love stories intertwined.

When I was pregnant with our daughter, we travelled to Hawaii’s main island, Oahu, for our ‘babymoon.’ In Waikiki, we visited Shangri-La, a mansion at Diamond Head built by the late tobacco heiress Doris Duke. The 1930s oceanfront house is a Spanish-Moorish-Persian-Indian extravaganza packed with Islamic treasures. The guide mentioned Doris’ daughter had been named Arden. “Arden,” I repeated. That was it. Our baby’s name had rolled in on the Waikiki surf.

Now, as we plan a wedding in our favourite islands, the challenge is choice. There are six Hawaiian islands, each with its own unique take on the spirit of love which shapes Hawaiian culture. In all the islands, ‘aloha’ is not only a greeting but a philosophy, a gift and a way of life. Hawaiians use the word sincerely. Aloha is everywhere. How to pick a single spot? I’m drawn strongly to Kauai, perhaps the most romantic of all Hawaii’s love-imbued islands.

Kauai’s spectacular natural assets – soaring cliffs and canyons, emerald rainforests and abundant waterfalls – have made the island a star in more than 60 movies and TV shows. Pirates of the Caribbean, Jurassic Park, South Pacific, Raiders of the Lost Ark, Fantasy Island and Gilligan’s Island all feature Kauai’s landscape.

It was on Kauai that Elvis sang the famous Hawaiian wedding song in the final scene of Blue Hawaii, floating in on a flower-bedecked barge though the lagoon in the Coconut Grove at the old Coco Palms Hotel. The hotel, now-closed former stars’ playground, also houses the picturesque wedding chapel where Rita Hayworth was married in the movie Miss Sadie Thompson.

Coco Palms is a part-eerie, part-glorious remnant of a grander time and you can tour the grounds – or book your own Blue Hawaii wedding there, with chapel and/ or barge. I’m tempted; that scene and song can still make me shed a tear on a delicate day. On its north shore, Kauai also boasts Hanalei Bay; a golden, half-moon shaped beach which inspired the old Hawaiian love song Hanalei Moon and featured in the 1958 movie South Pacific.

A breathtaking sunset viewed from the little pier is a simple, perfect experience for two; a place to just hold each other while nature provides the show.

The island of Maui is a beguiling mix of rustic pleasures in the ‘upcountry’ – including delicious fresh produce – and dazzling resorts on the coast. But its real romantic drawcard is the volcano Haleakala. A sunset or sunrise viewed from its 3,050 metre peak unforgettably displays why this sacred mountain is named ‘house of the sun.’

By night, the stars spread out before you like a glittering fishing net with the night sky trapped inside. “I never knew there were so many,” people say when faced with this super-clear evening astronomy.

Stars and sea; they are Hawaii’s soul. The first settlers, Polynesian fishermen, navigated the vast Pacific with only the sky and currents to guide them – no charts, no instruments. Surfing, hula, traditional songs; all celebrate the mystery and beauty of above and below. Hawaii’s volcanos, which rose from the ocean floor millennia ago, are the sacred places where depths and heavens meet, and a close encounter with their primeval energy is a powerful shared experience. Atop the summit of volcano Mauna Kea, the ocean floor is 10,100 metres beneath your feet. Measured from that base, this mountain is more than twice the height of Mount Everest. Romantic backdrops don’t come grander than that.

Mauna Kea is on Hawaii Island, known as ‘The Big Island’ thanks to the extra 80 kilometres or so that make it Hawaii’s largest land mass at 15×122 kilometres. The Big Island’s moods are dominated by its volcanoes. If for you, romance is drama, you will find it here among the lava and stunning black beaches – an elegant counterpoint to the ivory-white sands also on the island.

And then there’s Oahu, home of the capital Honolulu and known as ‘the heart of Hawaii.’ It’s special to so many people, as it’s the place where they first set foot on Hawaii. Even on the busiest stretch of the Waikiki hub there’s still a gracious aura; the original, stately hotels such as the pastel-pink Royal Hawaiian and the elegant, white Halekulani nestle amid the newer resort towers.

Out in the gentle waves, Waikiki beach boys have been teaching visitors to surf in this stretch of water once only populated by kings, for more than 100 years. Up on Oahu’s serene north shore you can surf beside sea turtles and once, when I was sunbathing at Turtle Bay, a seal came waddling out of the ocean and lay down just a metre away to bask beside me.

To hold hands and sip a Mai Tai in the famous beachside bar at the Royal Hawaiian while the sun sets over Waikiki is to experience the enchanting Hawaiian serenade that sang to me across the world for all those years.

Soon we’ll have to make the tricky decision and pick our wedding spot from this endless array of beauties. But I know that wherever in Hawaii we marry, it will feel like home.